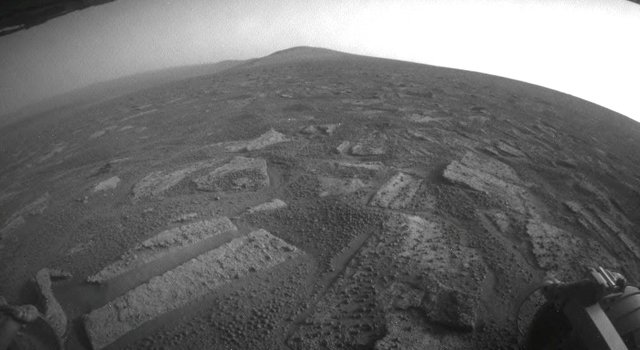 This view shows the terrain that NASA's Mars Exploration Rover Opportunity is crossing in a flat area called "Botany Bay" on the way toward "Solander Point," which is visible on the horizon.› Full image and caption
Credit: NASA/JPL-Caltech

NASA's Mars Exploration Rover Opportunity has driven more than half of the distance needed to get from a site where it spent 22 months to its next destination.

PASADENA, Calif. - NASA's Mars Exploration Rover Opportunity has driven more than half of the distance needed to get from a site where it spent 22 months to its next destination.

The rover has less than half a mile (800 meters) to go to finish a 1.2-mile (2-kilometer) dash from one crater-rim segment, where it worked since mid-2011, to another, where mission controllers intend to keep Opportunity busy during the upcoming Martian winter.

Opportunity departed the southern tip of the "Cape York" segment six weeks ago and headed south for "Solander Point." Both are raised portions of the western rim of 14-mile-wide (22-kilometer-wide) Endeavour Crater, offering access to older geological deposits than the rover visited during its first seven years on Mars. Opportunity was launched from Florida on July 7, 2003, EDT (July 8, UTC). It landed on Mars Jan. 24, 2004, PDT (Jan. 25, EDT and UTC).

The terrain is favorable for the trek.

"The surface that Opportunity is driving across in Botany Bay is polygonally fractured outcrop that is remarkably good for driving," said Brad Joliff, an Opportunity science team member and long-term planner at Washington University in St. Louis. "The plates of outcrop, like a tiled mosaic pavement, have a thin covering of soil, not enough to form the wind-blown ripples we've had to deal with during some other long treks. The outcrop plates are light-toned, and the cracks between them are filled with dark, basaltic soil and our old friends the 'blueberries.'"

The BB-size spherules nicknamed "blueberries" are hematite-rich, erosion-resistant concretions that Opportunity discovered at its landing site and continued seeing on much of the ground between there and Endeavour Crater.

The rise of Solander Point to the south gives the team a very visible destination during the drive. That destination offers both a tall cross section of rock layers for examination and also an expanse of terrain that includes a north-facing slope, which is favorable for the solar-powered rover to stay active and mobile through the coming Martian southern-hemisphere winter.