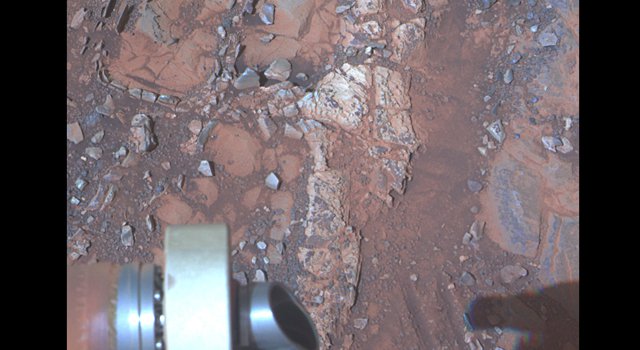 The pale rock in the upper center of this image, about the size of a human forearm, includes a target called "Esperance," which was inspected by NASA's Mars Exploration Rover Opportunity. Data from the rover's alpha particle X-ray spectrometer (APXS) indicate that Esperance's composition is higher in aluminum and silica, and lower in calcium and iron, than other rocks Opportunity has examined in more than nine years on Mars. Preliminary interpretation points to clay mineral content due to intensive alteration by water.› Full image and caption
Credit: NASA/JPL-Caltech/Cornell/Arizona State Univ. 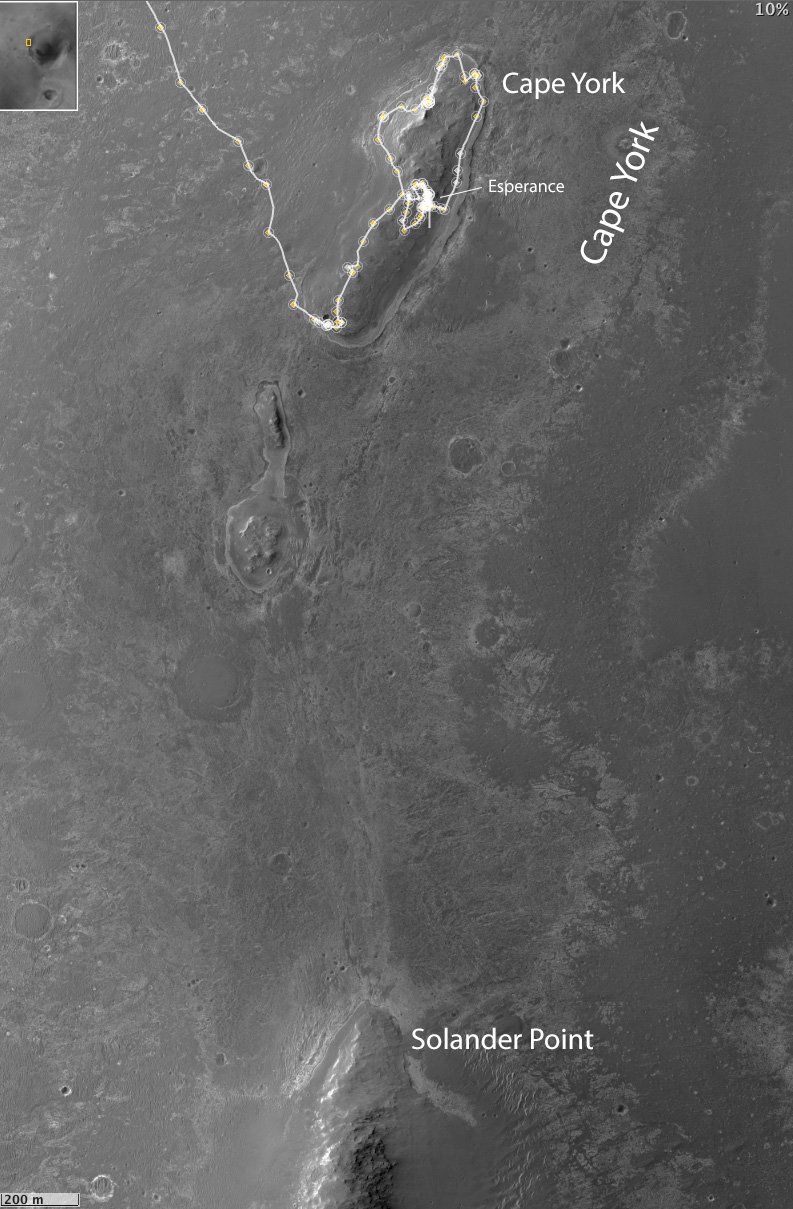 This map of a portion of the western rim of Endeavour Crater on Mars shows the area where NASA's Mars Exploration Rover Opportunity worked for 20 months, "Cape York," in relation to the area where the rover team plans for Opportunity to spend its sixth Martian winter, "Solander Point."› Full image and caption 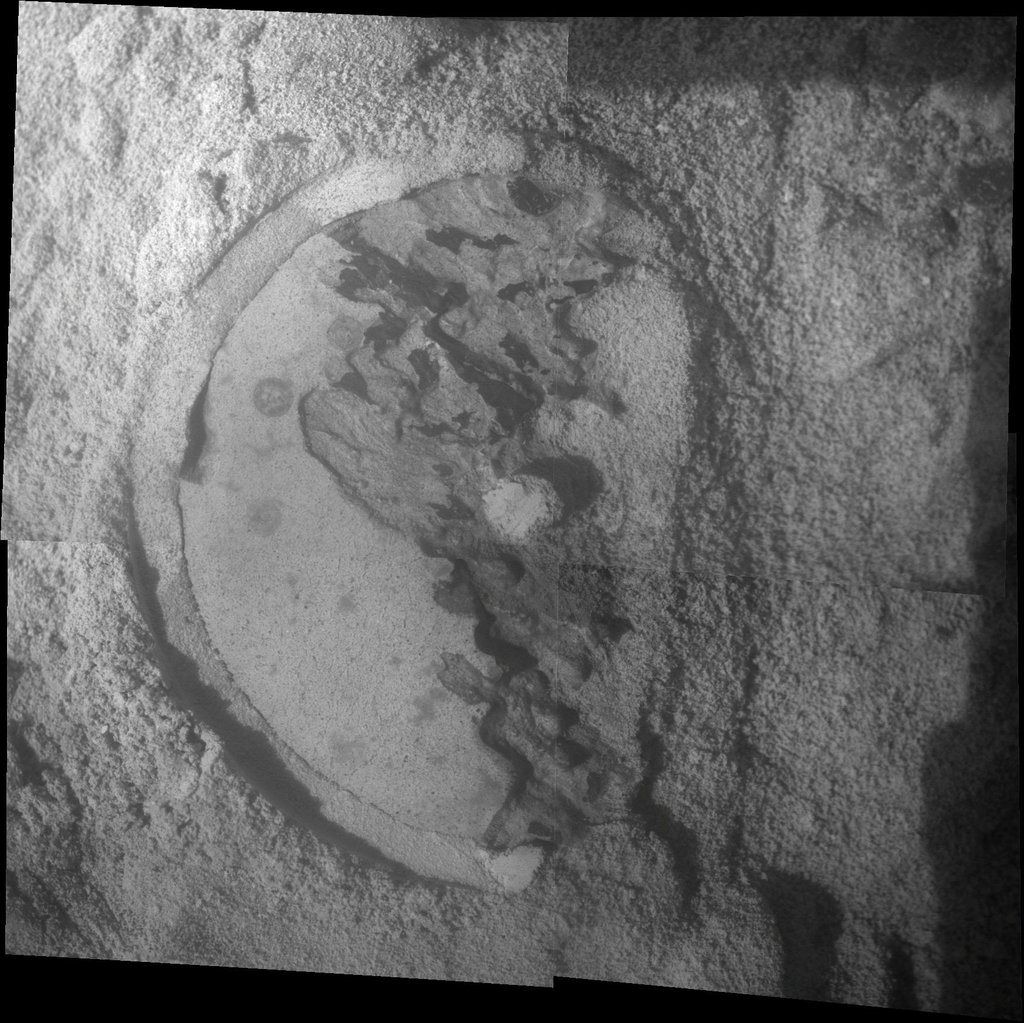 This mosaic of four frames shot by the microscopic imager on the robotic arm of NASA's Mars Exploration Rover Opportunity shows a rock target called "Esperance" after some of the rock's surface had been removed by Opportunity's rock abrasion tool, or RAT.› Full image and caption
Credit: NASA/JPL-Caltech/Cornell/USGS

NASA's senior Mars rover, Opportunity, is driving to a new study area after a dramatic finish to 20 months on "Cape York" with examination of a rock intensely altered by water.

PASADENA, Calif. -- NASA's senior Mars rover, Opportunity, is driving to a new study area after a dramatic finish to 20 months on "Cape York" with examination of a rock intensely altered by water.

The fractured rock, called "Esperance," provides evidence about a wet ancient environment possibly favorable for life. The mission's principal investigator, Steve Squyres of Cornell University, Ithaca, N.Y., said, "Esperance was so important, we committed several weeks to getting this one measurement of it, even though we knew the clock was ticking."

The mission's engineers at NASA's Jet Propulsion Laboratory, Pasadena, Calif., had set this week as a deadline for starting a drive toward "Solander Point," where the team plans to keep Opportunity working during its next Martian winter.

"What's so special about Esperance is that there was enough water not only for reactions that produced clay minerals, but also enough to flush out ions set loose by those reactions, so that Opportunity can clearly see the alteration," said Scott McLennan of the State University of New York, Stony Brook, a long-term planner for Opportunity's science team.

This rock's composition is unlike any other Opportunity has investigated during nine years on Mars -- higher in aluminum and silica, lower in calcium and iron.

The next destination, Solander Point, and the area Opportunity is leaving, Cape York, both are segments of the rim of Endeavour Crater, which spans 14 miles (22 kilometers) across. The planned driving route to Solander Point is about 1.4 miles (2.2 kilometers). Cape York has been Opportunity's home since the rover arrived at the western edge of Endeavour in mid-2011 after a two-year trek from a smaller crater.

"Based on our current solar-array dust models, we intend to reach an area of 15 degrees northerly tilt before Opportunity's sixth Martian winter," said JPL's Scott Lever, mission manager. "Solander Point gives us that tilt and may allow us to move around quite a bit for winter science observations."

Northerly tilt increases output from the rover's solar panels during southern-hemisphere winter. Daily sunshine for Opportunity will reach winter minimum in February 2014. The rover needs to be on a favorable slope well before then.

The first drive away from Esperance covered 81.7 feet (24.9 meters) on May 14. Three days earlier, Opportunity finished exposing a patch of the rock's interior with the rock abrasion tool. The team used a camera and spectrometer on the robotic arm to examine Esperance.

The team identified Esperance while exploring a portion of Cape York where the Compact Reconnaissance Spectrometer for Mars (CRISM) on NASA's Mars Reconnaissance Orbiter had detected a clay mineral. Clays typically form in wet environments that are not harshly acidic. For years, Opportunity had been finding evidence for ancient wet environments that were very acidic. The CRISM findings prompted the rover team to investigate the area where clay had been detected from orbit. There, they found an outcrop called "Whitewater Lake," containing a small amount of clay from alteration by exposure to water.

"There appears to have been extensive, but weak, alteration of Whitewater Lake, but intense alteration of Esperance along fractures that provided conduits for fluid flow," Squyres said. "Water that moved through fractures during this rock's history would have provided more favorable conditions for biology than any other wet environment recorded in rocks Opportunity has seen."

NASA's Mars Exploration Rover Project launched Opportunity to Mars on July 7, 2003, about a month after its twin rover, Spirit. Both were sent for three-month prime missions to study the history of wet environments on ancient Mars and continued working in extended missions. Spirit ceased operations in 2010.

JPL, a division of the California Institute of Technology in Pasadena, manages the Mars Exploration Rover Project for NASA's Science Mission Directorate. For more about Opportunity, visit: http://www.nasa.gov/rovers and http://marsrovers.jpl.nasa.gov . You can follow the project on Twitter and on Facebook at: http://twitter.com/MarsRovers and http://www.facebook.com/mars.rovers .