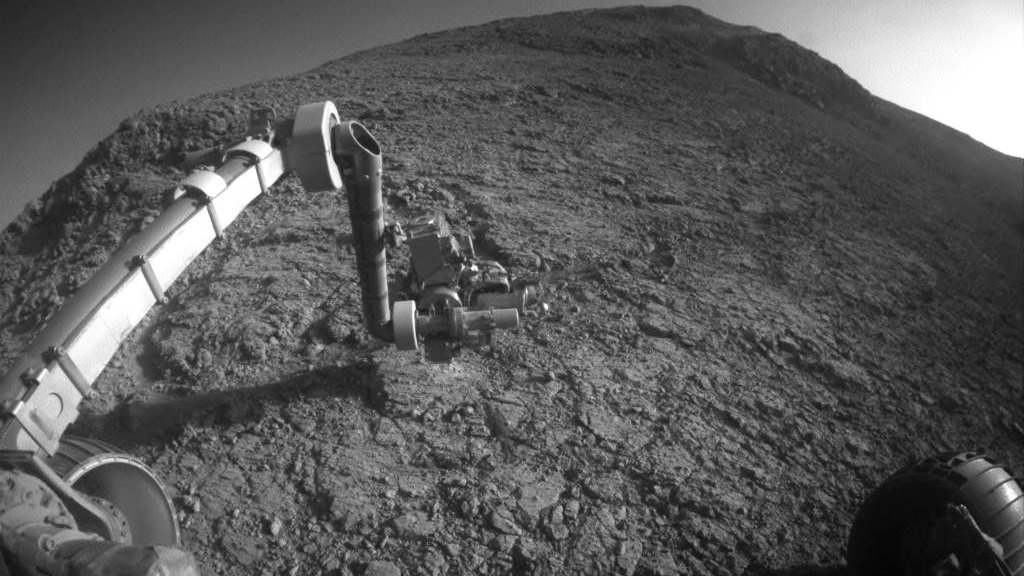 The target beneath the tool turret at the end of the rover's robotic arm in this image from NASA's Mars Exploration Rover Opportunity is "Private John Potts."› Full image and caption

NASA's Opportunity rover, which landed on Mars 12 years ago this week, remained active through the shortest-sunshine days of the current Martian winter.

› Power available to NASA's Mars rover Opportunity is increasing after the energy-minimum weeks of Martian winter.

› As the mission reaches the 12th anniversary of its landing on Mars, Opportunity is examining clues in "Marathon Valley" about Mars' history.

NASA's senior Mars rover, Opportunity, worked through the lowest-solar-energy days of the mission's seventh Martian winter, while using a diamond-toothed rock grinder and other tools in recent weeks to investigate clues about the Red Planet's environmental history.

The modern Mars environment lent a hand, providing wind that removed some dust from Opportunity's solar panels in the weeks before and after the Mars southern hemisphere's winter solstice on Jan. 2.

"Opportunity has stayed very active this winter, in part because the solar arrays have been much cleaner than in the past few winters," said Mars Exploration Rover Project Manager John Callas, of NASA's Jet Propulsion Laboratory, Pasadena, California.

With the winter solstice over, the amount of sunshine available to Opportunity will continue to increase for most of 2016.

The mission has just passed the 12th anniversary of its bouncy, hole-in-one landing on Mars. It landed on Jan. 24, 2004, PST (early Jan. 25, UTC). After the air-bag-cushioned craft stopped rolling inside Eagle Crater, which is about 72 feet (22 meters) in diameter, it opened to release the rover. Inspection of rocks in Eagle Crater during the originally planned mission of three months yielded evidence of wet, acidic environmental conditions on ancient Mars.

Researchers used Opportunity to examine a series of larger and ever more distant craters over the next few years, for access to deeper and older layers of Mars' history.

Each Martian year lasts about 1.9 Earth years. Because Mars is farther from the sun, it takes longer to complete each orbit. The north-south spin axis of Mars is tilted like Earth's, so Mars has summer and winter seasons, too. They are about twice as long as the seasons on Earth, though. That's why, 12 Earth years after Opportunity's landing, the rover is enduring its seventh Martian winter.

Opportunity has been exploring the western rim of a 14-mile-wide (22-kilometer-wide) crater named Endeavour since 2011. This winter, it is examining rocks on the southern side of "Marathon Valley," which slices through Endeavor Crater's rim from west to east. This is a location where observations by NASA's Mars Reconnaissance Orbiter have mapped concentrations of clay minerals that would have formed under wet, non-acidic conditions.

Researchers used Opportunity's rock abrasion tool this month to remove surface crust from a rock target called "Private John Potts." (The team is using names of members of the Lewis and Clark Expedition's Corps of Discovery as informal names for targets in Marathon Valley.) The composition and texture of the rock's exposed interior have been examined with instruments on Opportunity's robotic arm.

The winter work area on the valley's south side keeps the rover's solar panels tilted toward the sun crossing the northern sky. The benefits of dust-clearing events and the strategy of choosing winter locations on north-facing slopes are two key factors in extending Opportunity's productive career 48 times longer, so far, than the originally planned mission of three months after landing.

The solar panels are currently generating more than 460 watt hours per day. That is up about 40 percent from earlier in this Martian winter, but Opportunity has been able to conduct power-intensive operations such as driving and rock-grinding throughout the winter. By contrast, during Opportunity's first Martian winter on the Endeavour rim, power generation dipped below 300 watt-hours for more than two months, and the mission refrained from driving or rock-grinding for more than four months.

"With healthy power levels, we are looking forward to completing the work in Marathon Valley this year and continuing onward with Opportunity," Callas said.