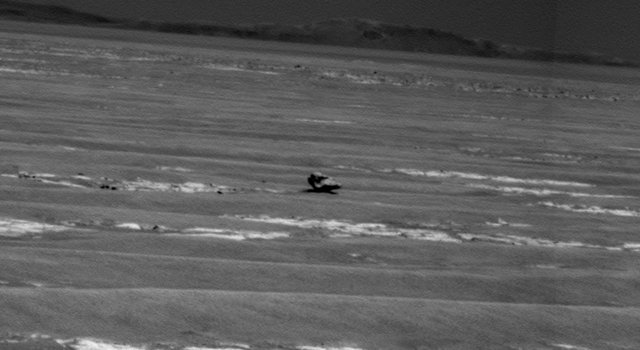 NASA's Mars Exploration Rover Opportunity used its panoramic camera to capture this view of a dark rock that may be an iron meteorite. Part of the rim of Endurance Crater is on the horizon.› Full image and caption
Credit: NASA/JPL-Caltech/Cornell University

A dark rock about the size of a toaster oven is visible in images NASA's Mars rover Opportunity took on Sept. 16. It may be a meteorite. The rover is going for a closer look.

PASADENA, Calif. -- Images that NASA's Mars Exploration Rover Opportunity took at the end of an 81-meter (266-foot) drive on Sept. 16 reveal a dark rock about 31 meters (102 feet) away. The rover's science team has decided to go get a closer look at the toaster-sized rock and determine whether it is an iron meteorite.

"The dark color, rounded texture and the way it is perched on the surface all make it look like an iron meteorite," said science-team member Matt Golombek of NASA's Jet Propulsion Laboratory, Pasadena, Calif. Opportunity has found four iron meteorites during the rover's exploration of the Meridiani Planum region of Mars since early 2004. Examination of these rocks has provided information about the Martian atmosphere, as well as the meteorites themselves.

The newfound rock has been given the informal name "Oileán Ruaidh" (pronounced ay-lan ruah), which is the Gaelic name for an island off the coast of northwestern Ireland. The rock is about 45 centimeters (18 inches) wide from the angle at which it was first seen.

Opportunity has driven 23.3 kilometers (14.5 miles) on Mars. The drive to this rock will take the total combined distance driven by Opportunity and its twin, Spirit, to more than 31 kilometers (19.26 miles).

JPL, a division of the California Institute of Technology in Pasadena, manages the Mars Exploration Rover mission for the NASA Science Mission Directorate, Washington. Opportunity landed on Mars in January 2004 for what was planned as a three-month mission. For more information about the mission, see http://marsrovers.jpl.nasa.gov.