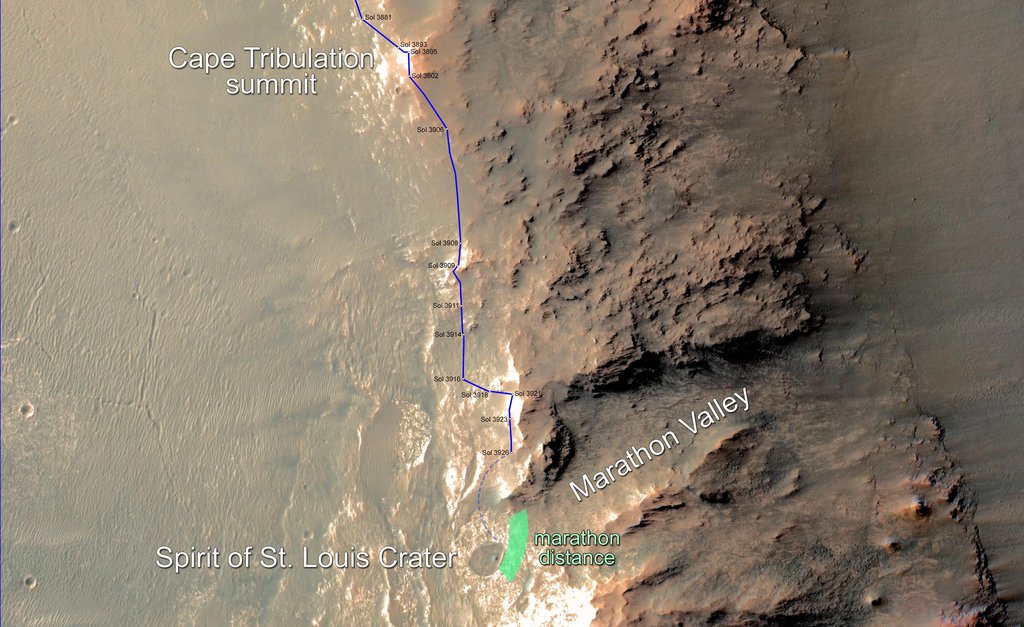 In February 2015, NASA's Mars Exploration Rover Opportunity is approaching a cumulative driving distance on Mars equal to the length of a marathon race. This map shows the rover's position relative to where it could surpass that distance.
Credit: NASA/JPL-Caltech/Univ. of Arizona
Full Image Details

Since landing on Mars in January 2004, NASA's Mars Exploration Rover Opportunity has driven nearly as far as a marathon footrace.

NASA's Mars Exploration Rover Opportunity is nearing a location on Mars at which its driving distance will surpass the length of a marathon race.

Opportunity is headed for a portion of the western rim of Endeavour Crater where observations by NASA's Mars Reconnaissance Orbiter have detected multiple types of clay minerals. These minerals are indicative of an ancient wet environment where water was more neutral rather than harshly acidic. More than six months ago, the rover team informally named that destination "Marathon Valley," having estimated what the odometry would total by the time Opportunity gets there.

"When Opportunity was in its prime mission 11 years ago, no one imagined this vehicle surviving a Martian winter, let alone completing a marathon on Mars," said Mars Exploration Rover Project Manager John Callas of NASA's Jet Propulsion Laboratory, Pasadena, California. "Now, that achievement is within reach as Opportunity approaches a strategic science destination. What's most important about the longevity and driving distance the mission keeps extending are not numerical thresholds, but the wealth of scientific information returned about Mars, made possible by these feats."

Before driving Opportunity into Marathon Valley, the team plans to use the rover for observations of an impact crater called "Spirit of Saint Louis Crater," at the entrance to the valley.

The team is operating Opportunity in a mode that avoids use of the rover's flash memory. In this mode, data gathered during each Martian day are stored in volatile memory and transmitted to an orbiter before the rover's overnight, energy-conserving "sleep." NASA orbiters Mars Odyssey and Mars Reconnaissance Orbiter relay the rover data to Earth.

Opportunity engineers plan in coming weeks to upload a software revision they have developed to enable resuming use of non-volatile flash memory. It is designed to restore Opportunity's capability to store data overnight or longer, for transmitting later.

During its original three-month prime mission, beginning after landing on Jan. 25, 2004, UST (Jan. 24, 2004, PST) Opportunity drove 0.48 mile (771.5 meters). Its twin, NASA's Mars Exploration Rover Spirit, landed three weeks earlier and covered 0.39 mile (635 meters) in its three-month prime mission. Both Spirit and Opportunity have returned compelling evidence about wet environments on ancient Mars. Spirit's mission ended in 2010. Since 2011, Opportunity has been investigating the western rim of Endeavour, a crater that is 14 miles (22 kilometers) in diameter.

The rover climbed to its highest elevation on the Endeavour rim on Jan. 6, 2015, reaching a point about 440 feet (135 meters) above the local plains. It has driven about 440 yards (400 meters) since then, mainly southward toward the entrance to Marathon Valley.