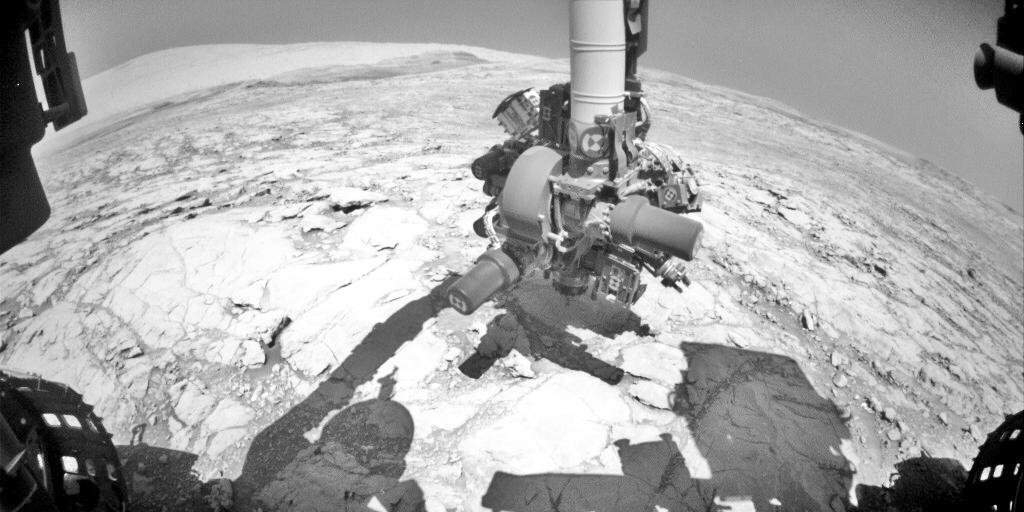 NASA's Curiosity Mars rover conducted a test on Oct. 17, 2017, as part of the rover team's development of a new way to use the rover's drill.
Credit: NASA/JPL-Caltech
Full Image Details 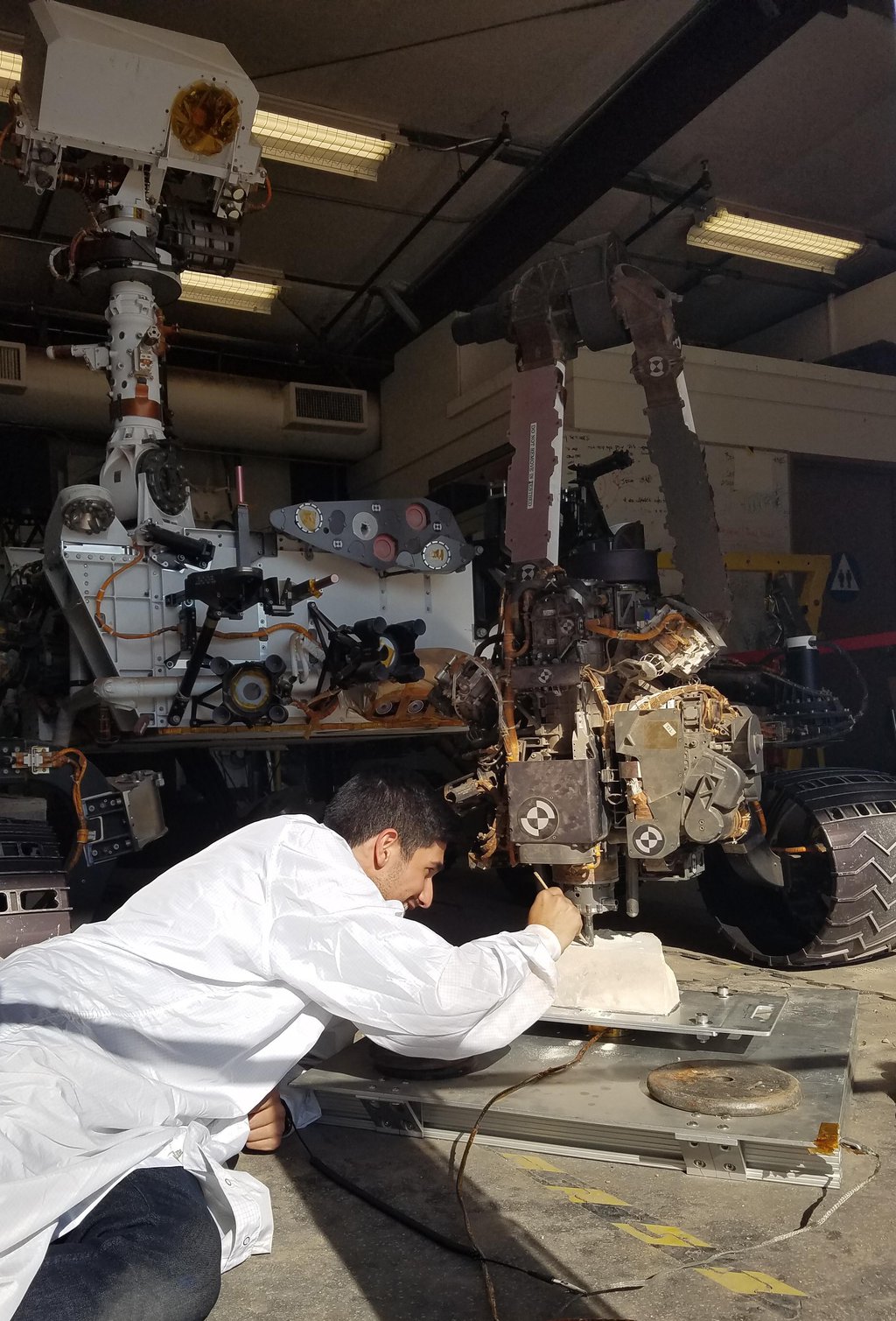 The team operating NASA's Curiosity Mars rover is developing techniques that the rover might be able to use to resume drilling into rocks on Mars in this June 2017 photo taken at JPL's Mars Yard.
Credit: NASA/JPL-Caltech
Full Image Details 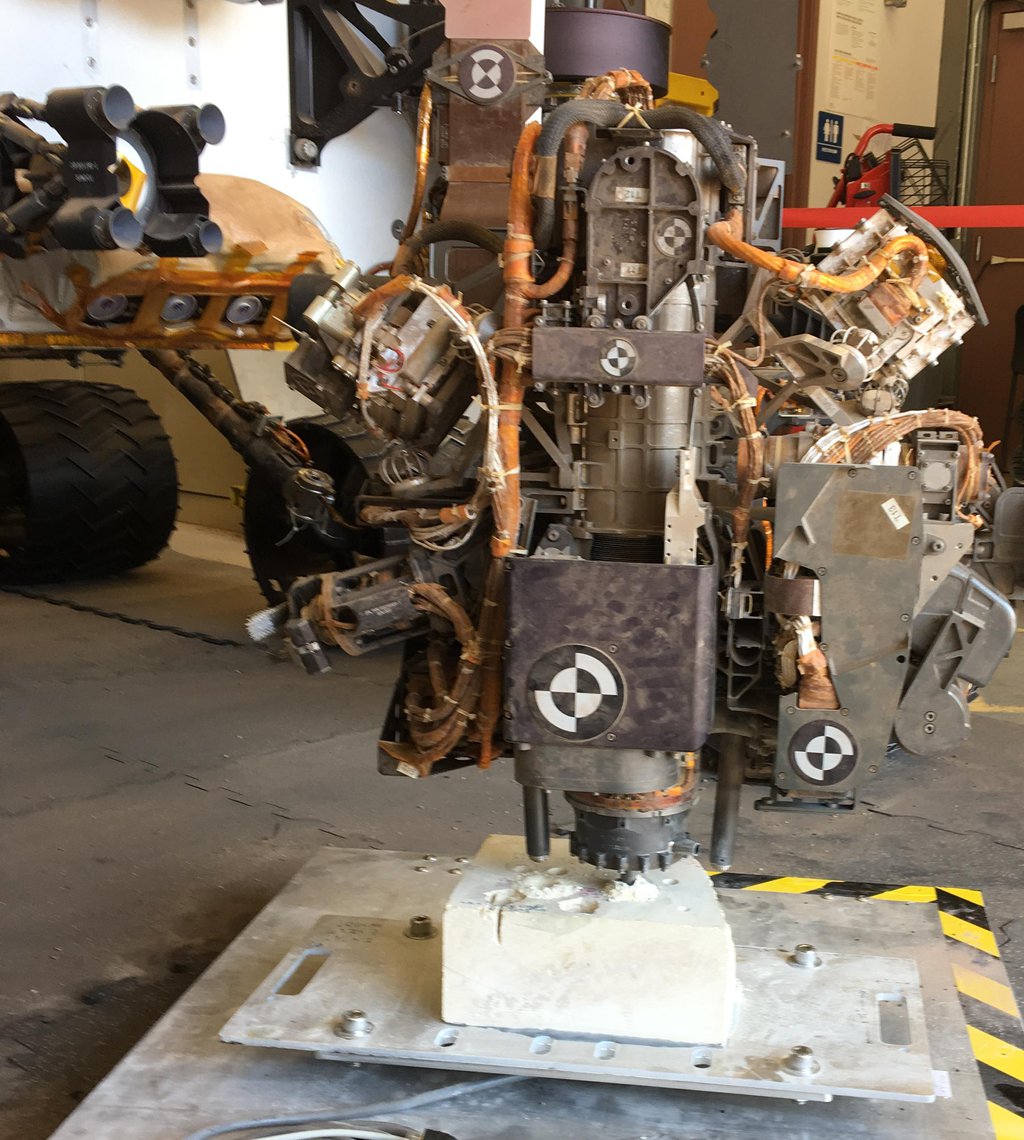 This photo taken in the Mars Yard at NASA's JPL, Pasadena, California, on Aug. 1, 2017, shows a step in development of possible alternative techniques that NASA's Curiosity Mars rover might be able to use to resume drilling into rocks on Mars.
Credit: NASA/JPL-Caltech
Full Image Details

The five-year-old mission is still several months from the soonest possible resumption of drilling into Martian rocks. Managers are enthusiastic about successful Earth-based tests of techniques to work around a mechanical problem that appeared late last year and suspended use of the rover's drill.

"We're steadily proceeding with due caution to develop and test ways of using the rover differently from ever before, and Curiosity is continuing productive investigations that don't require drilling," said Deputy Project Manager Steve Lee, of NASA's Jet Propulsion Laboratory, Pasadena, California.

Curiosity touched its drill to the ground Oct. 17 for the first time in 10 months. It pressed the drill bit downward, and then applied smaller sideways forces while taking measurements with a force sensor.

"This is the first time we've ever placed the drill bit directly on a Martian rock without stabilizers," said JPL's Douglas Klein, chief engineer for the mission's return-to-drilling development. "The test is to gain better understanding of how the force/torque sensor on the arm provides information about side forces."

This sensor gives the arm a sense of touch about how hard it is pressing down or sideways. Avoiding too much side force in drilling into a rock and extracting the bit from the rock is crucial to avoid having the bit get stuck in the rock.

Curiosity has used its drill to acquire sample material from Martian rocks 15 times so far, from 2013 to 2016. It collected powdered rock samples that were delivered to laboratory instruments inside the rover. On each of those occasions, two contact posts -- the stabilizers on either side of the bit -- were placed on the target rock while the bit was in a withdrawn position. Then a motorized feed mechanism within the drill extended the bit forward, and the bit's rotation and percussion actions penetrated the rock.

The drill's feed mechanism stopped working reliably in December 2016. After exploring possibilities of restoring the feed mechanism's reliability or using it despite unreliability, the project set a priority to develop an alternative method of drilling without use of the feed mechanism. The promising alternative uses motion of the robotic arm to directly advance the extended bit into a rock.

"We're replacing the one-axis motion of the feed mechanism with an arm that has five degrees of freedom of motion," Klein said. "That's not simple. It's fortunate the arm has the force/torque sensor."

The sensor's main use until now has been to monitor for a force so excessive of expectations that it would automatically halt all arm motion for the day. The new "feed-extended" drilling uses it to compensate for side loads. This test will help engineers determine how data from the sensor can be used most effectively.

Using this method, a near-twin of Curiosity at JPL has collected drilled samples from Earth rocks. The team has also developed methods to deliver drilled samples to the laboratory-instrument inlets on the test rover's deck without use of the drill's feed mechanism. Development of this alternative sample-transfer technique is needed because the process used previously depended on having the bit in a withdrawn, rather than extended, position.

"The development work and testing here at JPL has been promising," Lee said. "The next step is to assess the force/torque sensor on Mars. We've made tremendous progress in developing feed-extended drilling, using the rover's versatile capabilities beyond the original design concepts. While there are still uncertainties that may complicate attempts to drill on Mars again, we are optimistic."

The rover's current location is on "Vera Rubin Ridge" on lower Mount Sharp. Curiosity is nearing the top of the 20-story-tall ridge. It has been studying the extent and distribution of the iron-oxide mineral hematite in the rocks that make up the erosion-resistant ridge.

During the first year after Curiosity's landing near Mount Sharp, the mission accomplished a major goal by determining that, billions of years ago, a Martian lake offered conditions that would have been favorable for microbial life. Curiosity has since traversed through a diversity of environments where both water and wind have left their imprint. Vera Rubin Ridge and layers above it that contain clay and sulfate minerals provide tempting opportunities to learn even more about the history and habitability of ancient Mars. For more about Curiosity, visit: