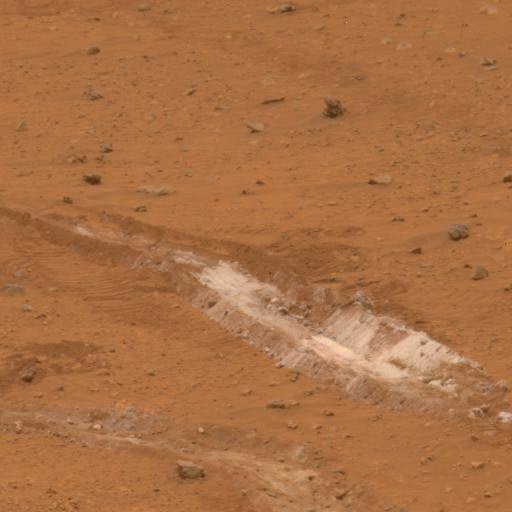 In March 2007, NASA's Spirit rover found a patch of bright-toned soil so rich in silica that scientists proposed water must have been involved in concentrating it.+ Caption and full image
Credit: NASA/JPL/Cornell

SAN FRANCISCO - Researchers using NASA's twin Mars rovers are sorting out two possible origins for one of Spirit's most important discoveries, while also getting Spirit to a favorable spot for surviving the next Martian winter.

SAN FRANCISCO - Researchers using NASA's twin Mars rovers are sorting out two possible origins for one of Spirit's most important discoveries, while also getting Spirit to a favorable spot for surviving the next Martian winter.

The puzzle is what produced a patch of nearly pure silica -- the main ingredient of window glass -- that Spirit found last May. It could have come from either a hot-spring environment or an environment called a fumarole, in which acidic steam rises through cracks. On Earth, both of these types of settings teem with microbial life.

"Whichever of those conditions produced it, this concentration of silica is probably the most significant discovery by Spirit for revealing a habitable niche that existed on Mars in the past," said Steve Squyres of Cornell University, Ithaca, N.Y., principal investigator for the rovers' science payload. "The evidence is pointing most strongly toward fumarolic conditions, like you might see in Hawaii and in Iceland. Compared with deposits formed at hot springs, we know less about how well fumarolic deposits can preserve microbial fossils. That's something needing more study here on Earth."

Halfway around Mars from Spirit, Opportunity continues adding information about types of wet environments on ancient Mars other than hot springs or fumaroles. It is examining layers exposed inside a crater, but still near the top of a stack of sulfate-rich layers hundreds of meters (yards) thick. Scientists read a history of conditions that evolved from wetter to drier, based on findings by Opportunity and observations of the region by Mars orbiters.

The solar-powered rovers have been active on Mars since January 2004, more than 15 times longer than originally planned. Their third Martian winter will not reach minimum sunshine until June, but Spirit already needs two days of power output to drive for an hour.

"Spirit is going into the winter with much more dust on its solar panels than in previous years," said John Callas of NASA's Jet Propulsion Laboratory, Pasadena, Calif., project manager for the rovers. "The last Martian winter, we didn't move Spirit for about seven months. This time, the rover is likely to be stationary longer and with significantly lower available energy each Martian day."

Dust storms that darkened Martian skies this past June dropped dust onto both rovers. However, gusts cleaned Opportunity's panels, and Opportunity is closer to the equator than Spirit is, so concerns for winter survival focus on Spirit. The team has selected a sun-facing slope of about 25 degrees on the northern edge of a low plateau, "Home Plate," as a safe winter haven for Spirit.

Both rovers resumed productive field work after the June dust storms. Spirit explored the top of Home Plate, in the vicinity of silica-rich soil it discovered before the dust storms hit.

"This stuff is more than 90 percent silica," Squyres said. "There aren't many ways to explain a concentration so high." One way is to selectively remove silica from the native volcanic rocks and concentrate it in the deposits Spirit found. Hot springs can do that, dissolving silica at high heat and then dropping it out of solution as the water cools. Another way is to selectively remove almost everything else and leave the silica behind. Acidic steam at fumaroles can do that. Scientists are still assessing both possible origins. One reason Squyres favors the fumarole story is that the silica-rich soil on Mars has an enhanced level of titanium. On Earth, titanium levels are relatively high in some fumarolic deposits.

Mineral mapping and high-resolution imagery from Mars orbiters are helping scientists put the findings of Spirit and Opportunity into broader geological context. Opportunity's exploration of the Meridiani region has taken advantage of the natural excavations at impact craters to inspect layers extending several meters below the surface of the regional plain. These sulfate-rich layers bear extensive evidence for a wet, acidic past environment. They are a small upper fraction of the sulfate-rich layering exposed elsewhere in Meridiani and examined from orbit.

"We see evidence from orbit for clay minerals under the layered sulfate materials," said Ray Arvidson of Washington University in St. Louis, deputy principal investigator for the rovers' science payload. "They indicate less acidic conditions. The big picture appears to be a change from a more open hydrological system, with rainfall, to more arid conditions with groundwater rising to the surface and evaporating, leaving sulfate salts behind."

For images and information about the rovers, visit: www.nasa.gov/rovers and http://marsrovers.jpl.nasa.gov .