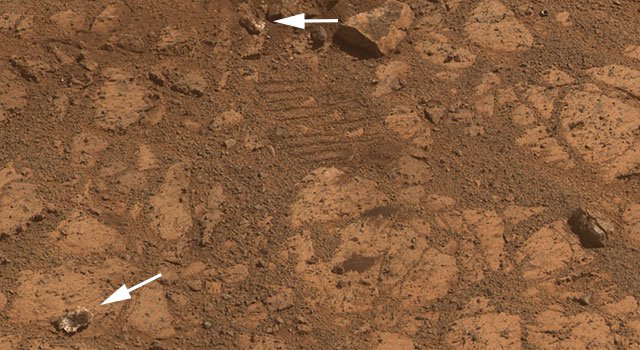 This image from the panoramic camera (Pancam) on NASA's Mars Exploration Rover Opportunity shows the location of "Pinnacle Island" rock before it appeared in front of the rover in early January 2014.› Full image and caption
Credit: NASA/JPL-Caltech/Cornell Univ./Arizona State Univ. 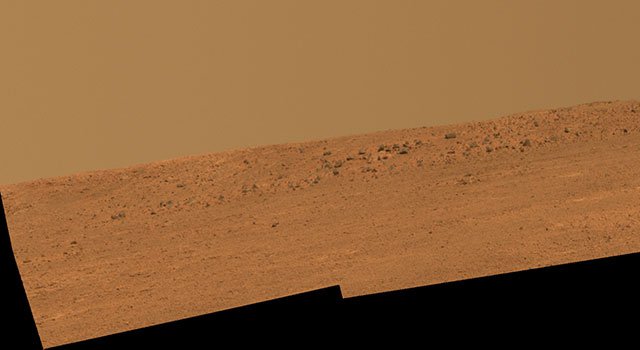 Researchers determine the Martian rock resembling a jelly doughnut is a piece of a larger rock broken and moved by the wheel of NASA's Mars Exploration Rover Opportunity.

Researchers have determined the now-infamous Martian rock resembling a jelly doughnut, dubbed Pinnacle Island, is a piece of a larger rock broken and moved by the wheel of NASA's Mars Exploration Rover Opportunity in early January.

Only about 1.5 inches wide (4 centimeters), the white-rimmed, red-centered rock caused a stir last month when it appeared in an image the rover took Jan. 8 at a location where it was not present four days earlier.

More recent images show the original piece of rock struck by the rover's wheel, slightly uphill from where Pinnacle Island came to rest.

"Once we moved Opportunity a short distance, after inspecting Pinnacle Island, we could see directly uphill an overturned rock that has the same unusual appearance," said Opportunity Deputy Principal Investigator Ray Arvidson of Washington University in St. Louis. "We drove over it. We can see the track. That's where Pinnacle Island came from."

Examination of Pinnacle Island revealed high levels of elements such as manganese and sulfur, suggesting these water-soluble ingredients were concentrated in the rock by the action of water. "This may have happened just beneath the surface relatively recently," Arvidson said, "or it may have happened deeper below ground longer ago and then, by serendipity, erosion stripped away material above it and made it accessible to our wheels."

Now that the rover is finished inspecting this rock, the team plans to drive Opportunity south and uphill to investigate exposed rock layers on the slope.

Opportunity is approaching a boulder-studded ridge informally named the McClure-Beverlin Escarpment, in honor of engineers Jack Beverlin and Bill McClure. Beverlin and McClure were the first recipients of the NASA Medal of Exceptional Bravery for their actions on Feb. 14, 1969, to save NASA's second successful Mars mission, Mariner 6, when the launch vehicle began to crumple on the launch pad from loss of pressure.

"Our team working on Opportunity's continuing mission of exploration and discovery realizes how indebted we are to the work of people who made the early missions to Mars possible, and in particular to the heroics of Bill McClure and Jack Beverlin," said rover team member James Rice of the Planetary Science Institute, Tucson, Ariz. "We felt this was really a fitting tribute to these brave men, especially with the 45th anniversary of their actions coming today."

Opportunity's work on the north-facing slope below the escarpment will give the vehicle an energy advantage by tilting its solar panels toward the winter sun. Feb. 14 is the winter solstice in Mars' southern hemisphere, which includes the region where Opportunity has been working since it landed in January 2004.

"We are now past the minimum solar-energy point of this Martian winter," said Opportunity Project Manager John Callas of NASA's Jet Propulsion Laboratory in Pasadena, Calif. "We now can expect to have more energy available each week. What's more, recent winds removed some dust from the rover's solar array. So we have higher performance from the array than the previous two winters."

During Opportunity's decade on Mars, and the 2004-2010 career of its twin, Spirit, NASA's Mars Exploration Rover Project has yielded a range of findings proving wet environmental conditions on ancient Mars -- some very acidic, others milder and more conducive to supporting life.