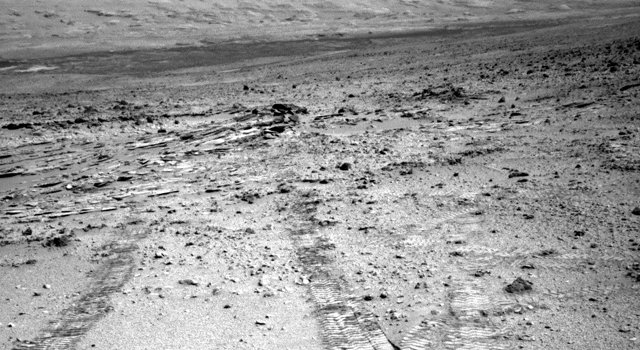 This view from the left Navigation Camera (Navcam) of NASA's Mars Rover Curiosity looks back at wheel tracks made during the first drive away from the last science target in the "Glenelg" area. The drive commenced a long trek toward the mission's long-term destination: Mount Sharp. Curiosity drove 59 feet (18) meters on the 324th Martian day, or sol, of the rover's work on Mars. It took this image that same sol, looking back toward the target sedimentary outcrop called "Shaler." Wheel tracks in the right foreground of the image were left by Curiosity's earlier passage through this area on its way toward Glenelg targets seven months earlier.› Full image and caption
Credit: NASA/JPL-Caltech

NASA's Mars rover Curiosity has begun a long trek toward Mount Sharp, leaving behind an area where it already accomplished its major science objective.

PASADENA, Calif. - With drives on July 4 and July 7, NASA's Mars rover Curiosity has departed its last science target in the "Glenelg" area and commenced a many-month overland journey to the base of the mission's main destination, Mount Sharp.

The rover finished close-up investigation of a target sedimentary outcrop called "Shaler" last week. On July 4, it drove 59 feet (18 meters) away from Shaler. On July 7, a second drive added another 131 feet (40 meters) on the trip toward a destination about 5 miles (8 kilometers) away, the entry to the lower layers of Mount Sharp.

Mount Sharp, in the middle of Gale Crater, exposes many layers where scientists anticipate finding evidence about how the ancient Martian environment changed and evolved. In the Glenelg area, where Curiosity worked for the first half of 2013, the rover found evidence for an ancient wet environment that had conditions favorable for microbial life. This means the mission already accomplished its main science objective.