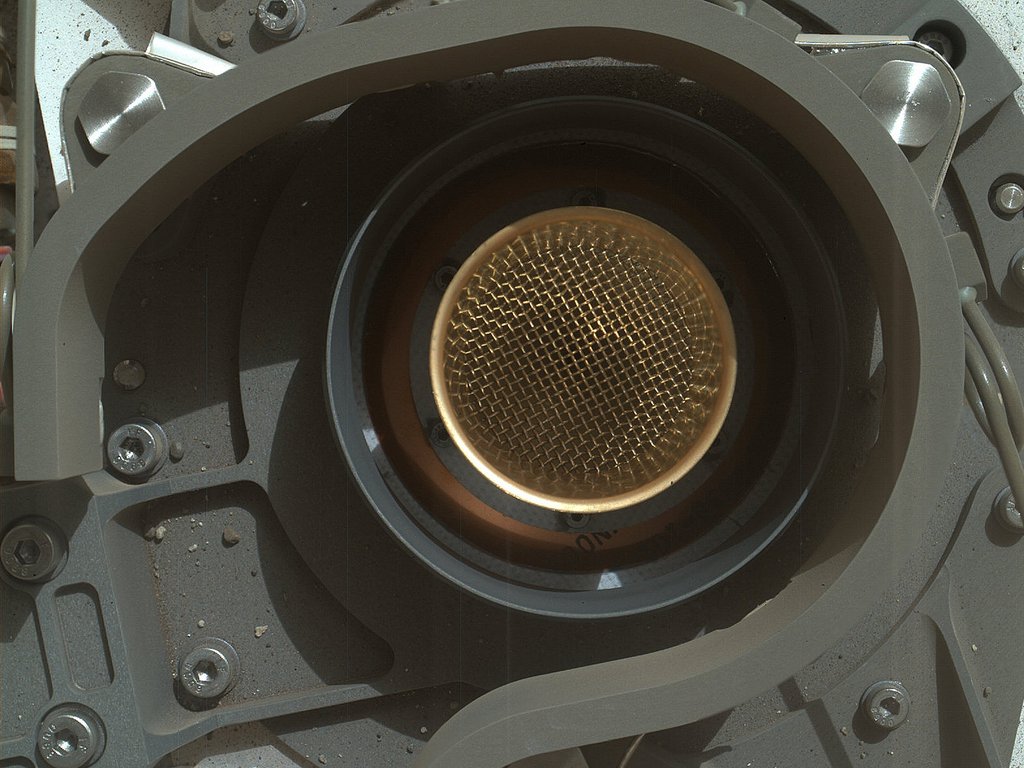 This image from NASA's Curiosity rover shows the open inlet where powdered rock and soil samples will be funneled down for analysis.› Full image and caption
Credit: NASA/JPL-Caltech 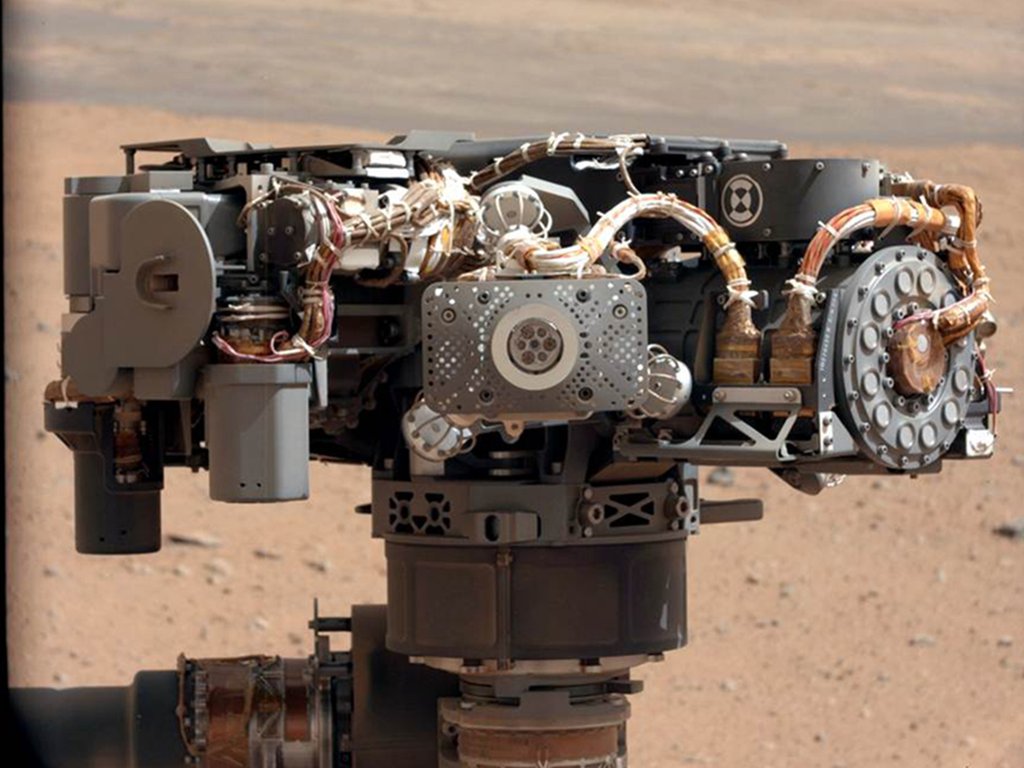 This image shows the Alpha Particle X-Ray Spectrometer (APXS) on NASA's Curiosity rover, with the Martian landscape in the background.› Full image and caption
Credit: NASA/JPL-Caltech/MSSS 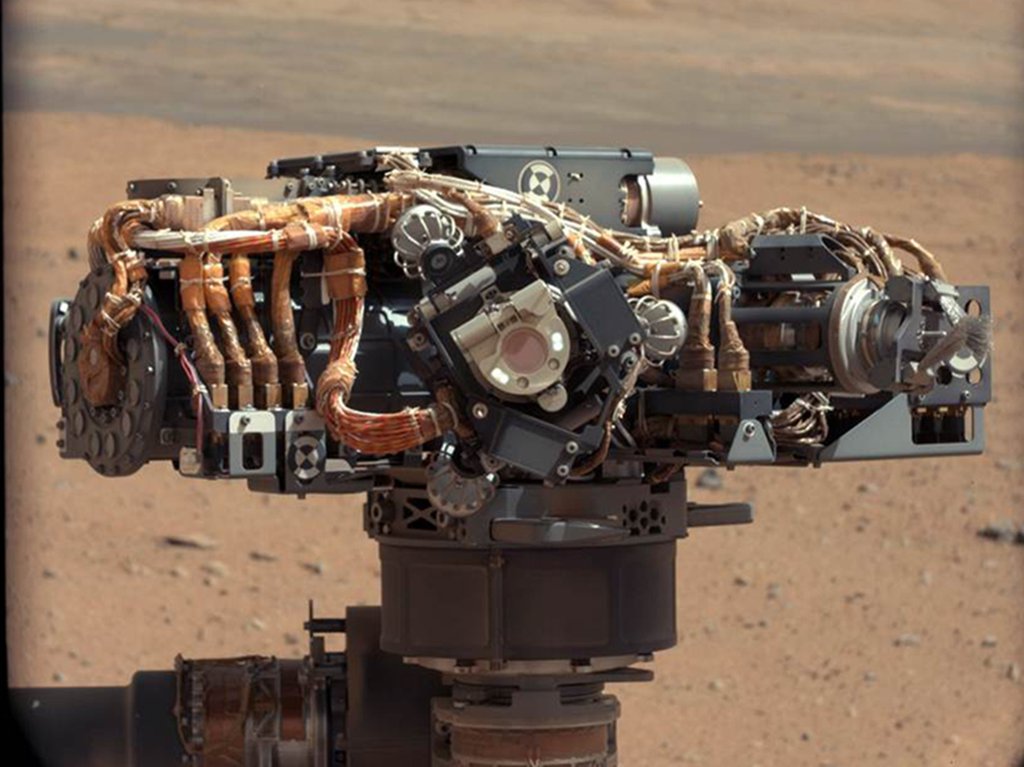 This image shows the Mars Hand Lens Imager (MAHLI) on NASA's Curiosity rover, with the Martian landscape in the background.› Full image and caption
Credit: NASA/JPL-Caltech/MSSS 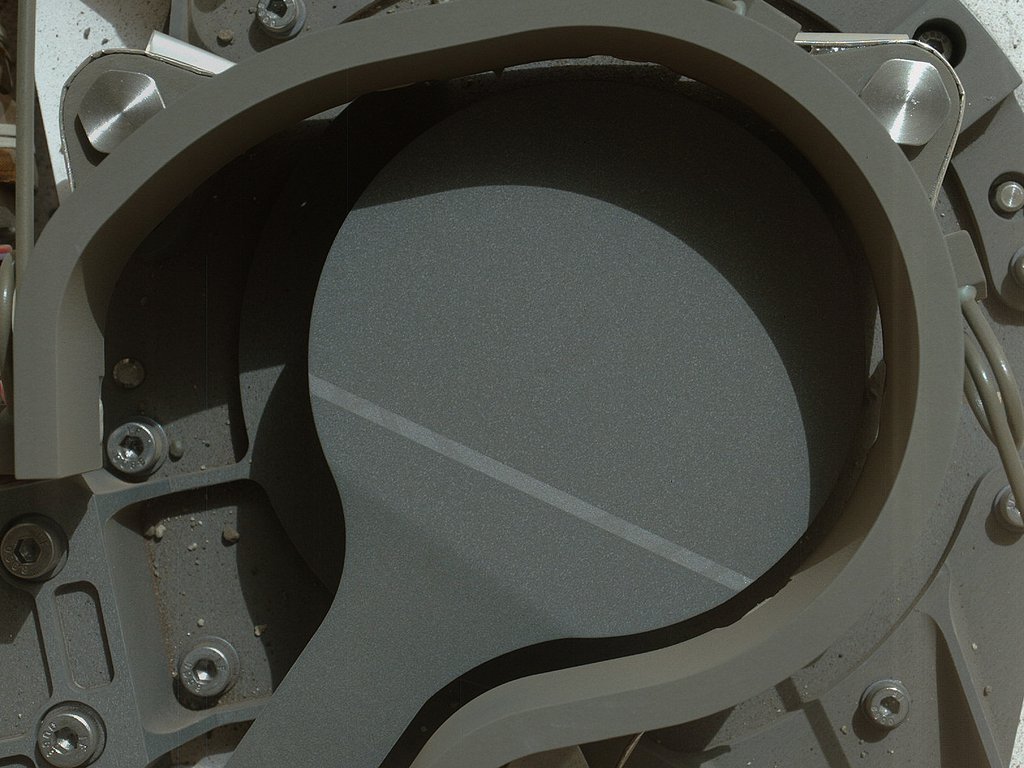 This image from NASA's Curiosity rover shows the cover on an inlet that will receive powdered rock and soil samples for analysis.› Full image and caption
Credit: NASA/JPL-Caltech/MSSS

This set of images from NASA's Curiosity rover shows the inlet covers for the Sample Analysis at Mars instrument opening and closing, as the rover continues to check out its instruments in the first phase after landing.› Full image and caption
Credit: NASA/JPL-Caltech/MSSS 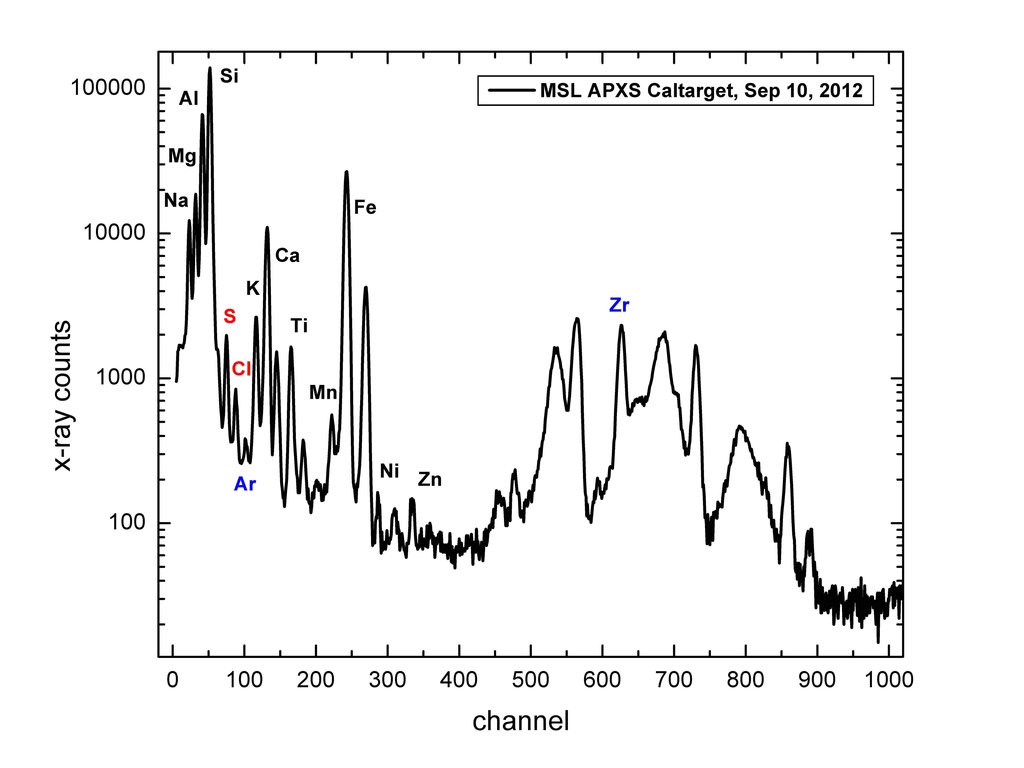 This graphic from NASA's Curiosity rover shows data obtained by the Alpha Particle X-Ray Spectrometer (APXS) from its calibration target on the 34th Martian day, or sol, of operations (Sept. 10, 2012).› Full image and caption
Credit: NASA/JPL-Caltech/University of Guelph

NASA's Mars Curiosity team has almost finished robotic arm tests in preparation for the rover to touch and examine its first Martian rock.

Tests with the 7-foot (2.1-meter) arm have allowed the mission team to gain confidence in the arm's precise maneuvering in Martian temperature and gravity conditions. During these activities, Curiosity has remained at a site it reached by its most recent drive on Sept. 5. The team will resume driving the rover this week and use its cameras to seek the first rock to touch with instruments on the arm.

"We're about to drive some more and try to find the right rock to begin doing contact science with the arm," said Jennifer Trosper, Curiosity mission manager at NASA's Jet Propulsion Laboratory in Pasadena, Calif.

Two science instruments -- a camera called Mars Hand Lens Imager (MAHLI) that can take close-up, color images and a tool called Alpha Particle X-Ray Spectrometer (APXS) that determines the elemental composition of a target rock -- have passed preparatory tests at the rover's current location. The instruments are mounted on a turret at the end of the arm and can be placed in contact with target rocks.

Curiosity's Canadian-made APXS had taken atmospheric readings earlier, but its first use on a solid target on Mars was this week on a calibration target brought from Earth. X-ray detectors work best cold, but even the daytime APXS tests produced clean data for identifying elements in the target.

"The spectrum peaks are so narrow, we're getting excellent resolution, just as good as we saw in tests on Earth under ideal conditions," said APXS principal investigator Ralf Gellert of the University of Guelph, in Ontario, Canada. "The good news is that we can now make high-resolution measurements even at high noon to support quick decisions about whether a sample is worthwhile for further investigations."

The adjustable-focus MAHLI camera this week has produced sharp images of objects near and far.

"Honestly, seeing those images with Curiosity's wheels in the foreground and Mount Sharp in the background simply makes me cry," said MAHLI principal investigator Ken Edgett of Malin Space Science Systems in San Diego. "I know we're just getting started, but it's already been an incredible journey."

MAHLI is also aiding evaluation of the arm's ability to position its tools and instruments. Curiosity moved the arm to predetermined "teach points" on Sept. 11, including points above each of three inlet ports where it will later drop samples of soil and powdered rock into analytical instruments inside the rover. Images from the MAHLI camera confirmed the placements. Photos taken before and after opening the inlet cover for the chemistry and mineralogy (CheMin) analytical instrument also confirmed good operation of the cover.

A test last week that checked X-rays passing through an empty sample cell in CheMin worked well. It confirmed the instrument beneath the inlet opening is ready to start analyzing soil and rock samples.

Curiosity is five weeks into a 2-year prime mission on Mars. It will use 10 science instruments to assess whether the selected field site inside Gale Crater has ever offered environmental conditions favorable for microbial life.