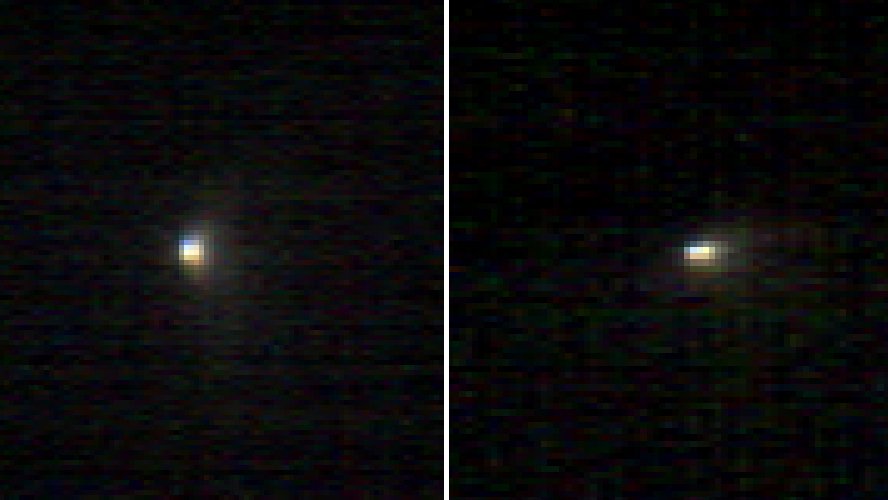 These two infrared images of comet C/2013 A1 Siding Spring were taken by the Compact Reconnaissance Imaging Spectrometer for Mars (CRISM) aboard NASA's Mars Reconnaissance Orbiter on Oct. 19, 2014. NASA/JPL-Caltech/JHUAPL› Full image and caption

The imaging spectrometer on NASA's Mars Reconnaissance Orbiter has provided an image of the coma surrounding a comet that flew near Mars this week.

The Compact Imaging Spectrometer for Mars (CRISM) observed comet C/2013 A1 Siding Spring as the comet sped close to Mars on Oct. 19. CRISM recorded imaging data in 107 different wavelengths, showing the inner part of the cloud of dust, called the coma, surrounding the comet's nucleus.

Two images from CRISM presenting three of the recorded wavelengths are online at:

Comet Siding Spring -- an Oort Cloud comet that may contain material from the formation of the solar system some 4.6 billion years ago -- was making its first voyage through the inner solar system. CRISM and many other instruments and spacecraft combined forces to provide an unprecedented data set for an Oort Cloud comet.

The appearance of color variations in the CRISM observations of the inner coma could be due to the properties of the comet's dust, possibly dust grain size or composition. The full spectra will be analyzed to better understand the reason for the color variations.

For more about CRISM, visit: