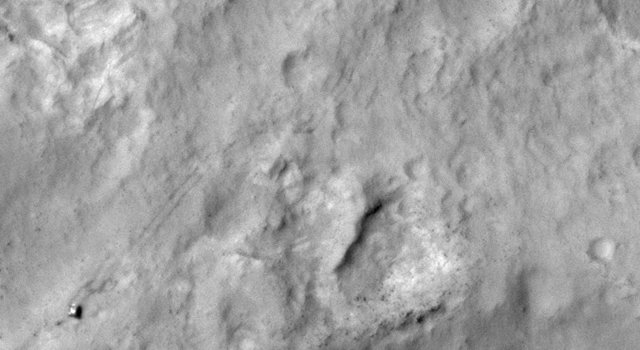 NASA's Curiosity Mars rover and tracks left by its driving appear in this portion of a Dec. 11, 2013, observation by the High Resolution Imaging Science Experiment (HiRISE) camera on NASA's Mars Reconnaissance Orbiter.› Full image and caption
Credit: NASA/JPL-Caltech/Univ. of Arizona 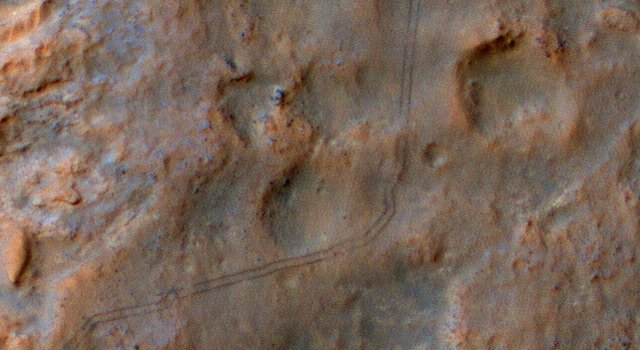 Two parallel tracks left by the wheels of NASA's Curiosity Mars rover cross rugged ground in this portion of a Dec. 11, 2013, observation by the High Resolution Imaging Science Experiment (HiRISE) camera on NASA's Mars Reconnaissance Orbiter. The rover itself does not appear in this part of the HiRISE observation.› Full image and caption
Credit: NASA/JPL-Caltech/Univ. of Arizona

An observation made last month by NASA's Mars Reconnaissance Orbiter shows the Curiosity rover and its tracks on the Martian surface.

Excerpts from the large HiRISE observation are at:

The tracks show where the rover has zigzagged around obstacles on its route toward the lower slopes of Mount Sharp, its next major destination.

HiRISE first imaged the Mars Science Laboratory spacecraft while it was descending on a parachute to place Curiosity on Mars 17 months ago. Since then, it has provided updated views of the rover's traverse, as seen from orbit.

HiRISE is operated by the University of Arizona, Tucson. The instrument was built by Ball Aerospace & Technologies Corp., Boulder, Colo. The Mars Reconnaissance Orbiter project and Mars Science Laboratory project are managed for NASA's Science Mission Directorate, Washington, by NASA's Jet Propulsion Laboratory, a division of the California Institute of Technology in Pasadena.