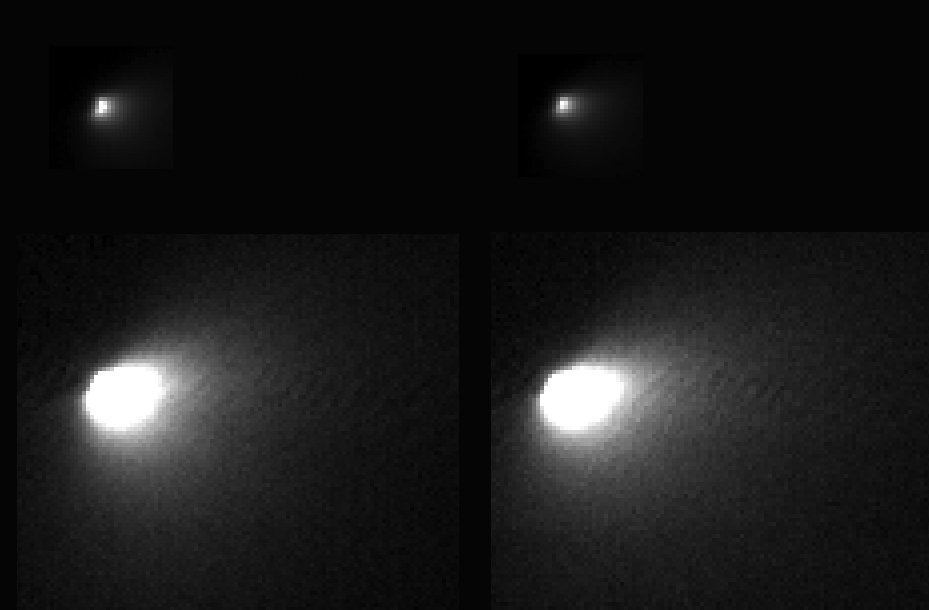 These images were taken of comet C/2013 A1 Siding Spring by NASA's Mars Reconnaissance Orbiter on Oct. 19, 2014, during the comet's close flyby of Mars and the spacecraft.› Full image and caption
Credit: NASA/JPL-Caltech/University of Arizona

A camera on NASA's Mars Reconnaissance Orbiter has taken the highest-resolution image ever made of an Oort Cloud comet, taking advantage of the comet's Mars flyby.

The images are the highest-resolution views ever acquired of a comet coming from the Oort Cloud at the fringes of the solar system. Other spacecraft have approached and studied comets with shorter orbits. This comet's flyby of Mars provided spacecraft at the Red Planet an opportunity to investigate from close range.

Images of comet Siding Spring from HiRISE are online at:

The highest-resolution of images of the comet's nucleus, taken from a distance of about 86,000 miles (138,000 kilometers), have a scale of about 150 yards (138 meters) per pixel. Telescopic observers had modeled the size of the nucleus as about half a mile, or one kilometer wide. However, the best HiRISE images show only two to three pixels across the brightest feature, probably the nucleus, suggesting a size smaller than half that estimate.

For more about HiRISE, visit: