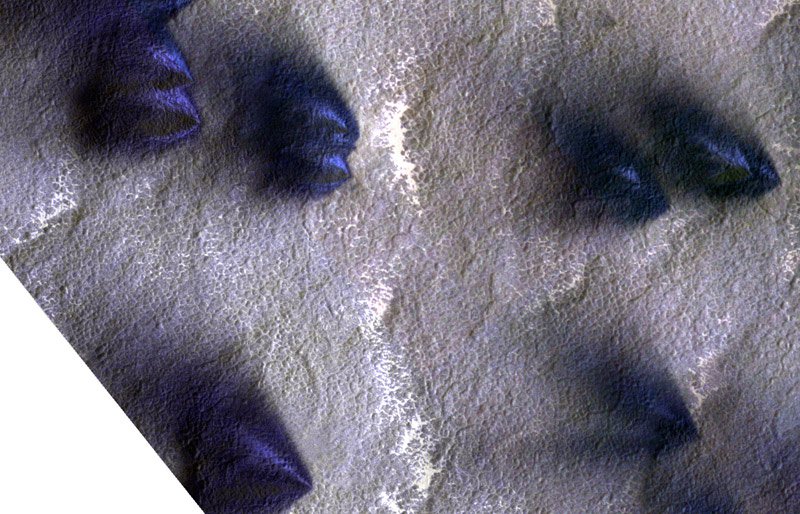 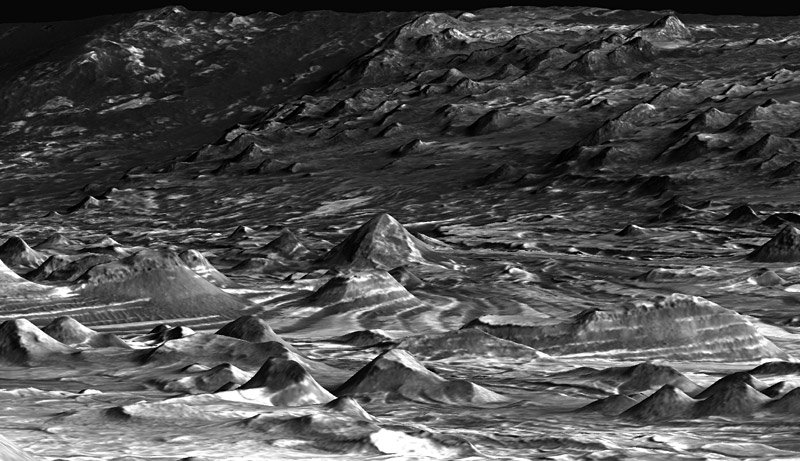 This is a perspective view of a scene within Mars' Candor Chasma. It shows how the surface would appear to a person standing on top of one of the many hills in the region and facing southeast.+ Full image and caption
Credit: NASA/JPL/University of Arizona

One type of landscape near Mars' south pole is called "cryptic terrain" because it once defied explanation, but new observations bolster and refine recent interpretations of how springtime outbursts of carbon-dioxide gas there sculpt intricate patterns and paint seasonal splotches.

"A lot of Mars looks like Utah, but this is an area that looks nothing like Planet Earth," said Candice Hansen of NASA's Jet Propulsion Laboratory, Pasadena, Calif., deputy principal investigator for the High Resolution Imaging Science Experiment (HiRISE) camera on NASA's Mars Reconnaissance Orbiter.

In addition to radially branching patterns called "spiders," which had been detected by an earlier Mars orbiter, other intriguing ground textures in the area appear in the new images. "In some places, the channels form patterns more like lace. In others, the texture is reminiscent of lizard skin," Hansen said.

Results from all six instruments on the Mars Reconnaissance Orbiter, which reached Mars last year, are described in dozens of presentations this week by planetary scientists in San Francisco at the fall meeting of the American Geophysical Union.

By taking stereo pictures of a target area from slightly different angles during different orbits, HiRISE can show the surface in three dimensions. Channels found to widen as they run uphill in the cryptic terrain region testify that the channels are cut by a gas, not a liquid.

Earlier evidence for jets of gas active in the region came from fan-shaped blotches appearing seasonally, which scientists interpret as material fallen to the surface downwind of vents where the gas escapes. Some of the fans are dark, others bright. "The dark fans are probably dust, but the exact composition of the brighter fans had remained unknown until now," said Tim Titus of the U.S. Geological Survey's Astrogeology Team, Flagstaff, Ariz.

Observations by the new orbiter's Compact Reconnaissance Imaging Spectrometer for Mars suggest that the bright fans are composed of carbon-dioxide frost. Here's the story researchers now propose: Spring warms the ground under a winter-formed coating of carbon dioxide ice. Thawing at the base of the coating generates carbon-dioxide gas, which carves channels as it pushes its way under the ice to a weak spot where it bursts free. The jet of escaping gas carries dust aloft and also cools so fast from expanding rapidly that a fraction of the carbon dioxide refreezes and falls back to the surface as frost.

The processes creating the cryptic terrain are current events on Mars. Repeated HiRISE observations of the same target area show the downwind fans can form and grow perceptibly in less than five days.

Other new findings from the Mars Reconnaissance Orbiter reveal processes of Martian environments long ago. A team including Chris Okubo of the University of Arizona, Tucson, used stereo HiRISE images to examine layered deposits inside Mars' Candor Chasma, part of Valles Marineris, the largest canyon system in the solar system.

"The high-resolution structural map allowed us to interpret the geological history of the area," Okubo said. "The layers are tilted in a way that tells us they are younger than the canyon." Spectrometer studies of the composition of these deposits had indicated water played a role in their formation, but their age relative to the formation of the canyon had been uncertain. The new findings suggest water was present after the canyon formed.

JPL, a division of the California Institute of Technology in Pasadena, manages the Mars Reconnaissance Orbiter mission for the NASA Science Mission Directorate, Washington. Lockheed Martin Space Systems, Denver, is the prime contractor for the project and built the spacecraft. The University of Arizona operates the HiRISE camera, which was built by Ball Aerospace and Technology Corp., Boulder, Colo. The Compact Reconnaissance Imaging Spectrometer for Mars team, led by Johns Hopkins University's Applied Physics Laboratory, includes expertise from universities, government agencies and small businesses in the United States and abroad.