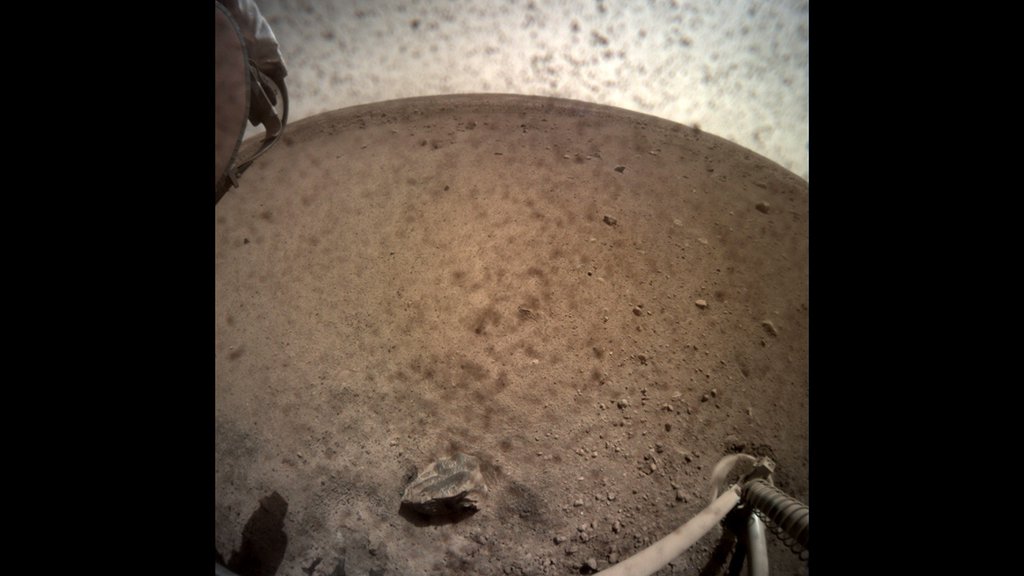 NASA's InSight spacecraft flipped open the lens cover on its Instrument Context Camera (ICC) on Nov. 30, 2018, and captured this view of Mars. Located below the deck of the InSight lander, the ICC has a fisheye view, creating a curved horizon. Some clumps of dust are still visible on the camera's lens. One of the spacecraft's footpads can be seen in the lower right corner. The seismometer's tether box is in the upper left corner.
Credit: NASA/JPL-Caltech

As visible in this two-frame set of images, NASA's InSight spacecraft unlatched its robotic arm on Nov. 27, 2018, the day after it landed on Mars.
Credit: NASA/JPL-Caltech

With InSight safely on the surface of Mars, the mission team is busy learning more about the spacecraft's landing site.

With InSight safely on the surface of Mars, the mission team at NASA's Jet Propulsion Laboratory in Pasadena, California, is busy learning more about the spacecraft's landing site. They knew when InSight landed on Nov. 26 that the spacecraft had touched down on target, a lava plain named Elysium Planitia. Now they've determined that the vehicle sits slightly tilted (about 4 degrees) in a shallow dust- and sand-filled impact crater known as a "hollow." InSight has been engineered to operate on a surface with an inclination up to 15 degrees.

"The science team had been hoping to land in a sandy area with few rocks since we chose the landing site, so we couldn't be happier," said InSight project manager Tom Hoffman of JPL. "There are no landing pads or runways on Mars, so coming down in an area that is basically a large sandbox without any large rocks should make instrument deployment easier and provide a great place for our mole to start burrowing."

Rockiness and slope grade factor into landing safety and are also important in determining whether InSight can succeed in its mission after landing. Rocks and slopes could affect InSight's ability to place its heat-flow probe - also known as "the mole," or HP3 - and ultra-sensitive seismometer, known as SEIS, on the surface of Mars.

Touching down on an overly steep slope in the wrong direction could also have jeopardized the spacecraft's ability to get adequate power output from its two solar arrays, while landing beside a large rock could have prevented InSight from being able to open one of those arrays. In fact, both arrays fully deployed shortly after landing.

The InSight science team's preliminary assessment of the photographs taken so far of the landing area suggests the area in the immediate vicinity of the lander is populated by only a few rocks. Higher-resolution images are expected to begin arriving over the coming days, after InSight releases the clear-plastic dust covers that kept the optics of the spacecraft's two cameras safe during landing.

"We are looking forward to higher-definition pictures to confirm this preliminary assessment," said JPL's Bruce Banerdt, principal investigator of InSight. "If these few images - with resolution-reducing dust covers on - are accurate, it bodes well for both instrument deployment and the mole penetration of our subsurface heat-flow experiment."

Once sites on the Martian surface have been carefully selected for the two main instruments, the team will unstow and begin initial testing of the mechanical arm that will place them there.

Data downlinked from the lander also indicate that during its first full day on Mars, the solar-powered InSight spacecraft generated more electrical power than any previous vehicle on the surface of Mars.

"It is great to get our first 'off-world record' on our very first full day on Mars," said Hoffman. "But even better than the achievement of generating more electricity than any mission before us is what it represents for performing our upcoming engineering tasks. The 4,588 watt-hours we produced during sol 1 means we currently have more than enough juice to perform these tasks and move forward with our science mission."

Launched from Vandenberg Air Force Base in California May 5, InSight will operate on the surface for one Martian year, plus 40 Martian days, or sols - the equivalent of nearly two Earth years. InSight will study the deep interior of Mars to learn how all celestial bodies with rocky surfaces, including Earth and the Moon, formed.

A number of European partners, including France's Centre National d'Études Spatiales (CNES) and the German Aerospace Center (DLR), are supporting the InSight mission. CNES, and the Institut de Physique du Globe de Paris (IPGP), provided the SEIS instrument, with significant contributions from the Max Planck Institute for Solar System Research (MPS) in Germany, the Swiss Institute of Technology (ETH) in Switzerland, Imperial College and Oxford University in the United Kingdom, and JPL. DLR provided the HP3 instrument, with significant contributions from the Space Research Center (CBK) of the Polish Academy of Sciences and Astronika in Poland. Spain's Centro de Astrobiología (CAB) supplied the wind sensors.