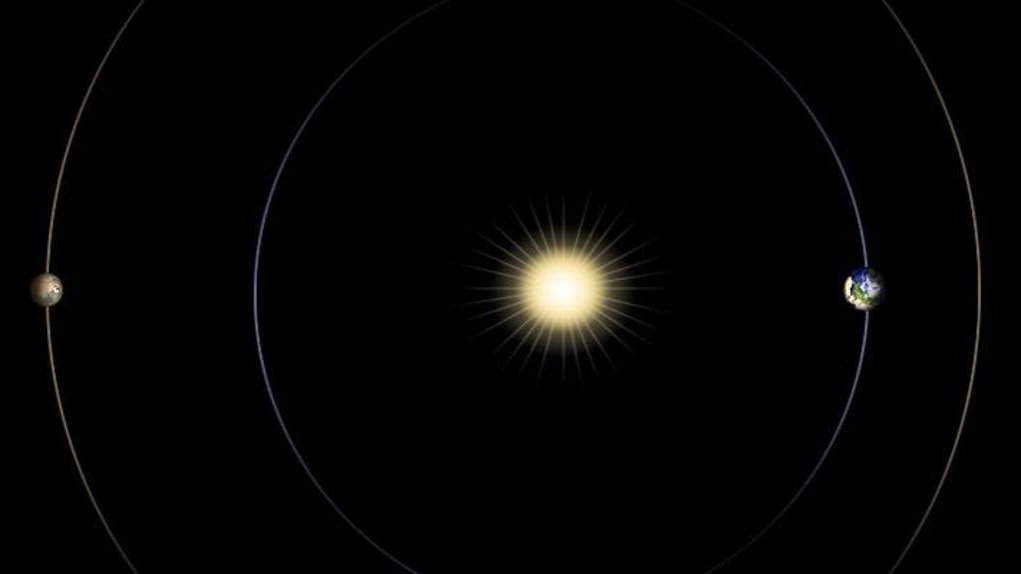 This diagram illustrates the positions of Mars, Earth and the sun during a period that occurs approximately every 26 months, when Mars passes almost directly behind the sun from Earth's perspective.› Full image and caption
Credit: NASA/JPL-Caltech

› In June 2015, Mars will pass almost directly behind the sun from Earth's perspective, a geometry called Mars solar conjunction.

› Because the sun disrupts radio transmissions between Earth and Mars during conjunction, communications are curtailed.

The arrangement of the sun between Earth and Mars is called Mars solar conjunction. It occurs about every 26 months as the two planets travel in their sun-centered orbits. The sun disrupts radio communications between the planets during the conjunction period. To prevent spacecraft at Mars from receiving garbled commands that could be misinterpreted or even harmful, the operators of Mars orbiters and rovers temporarily stop sending any commands.

The teams running NASA's three active Mars orbiters and two Mars rovers will refrain from sending commands to their spacecraft from about June 7 to June 21. During that period, the sun will be within two degrees of Mars in Earth's sky. (Don't try to look, though, because looking at the sun is dangerous to the eyes.) The operators also will put restrictions on commanding -- such as using only reduced data rates or communicating only in an emergency -- during the days before and after that period.

Spacecraft will continue making some science observations during the conjunction period, though rovers will not do any driving or arm movements.

"Our overall approach is based on what we did for the solar conjunction two years ago, which worked well," said Nagin Cox, a systems engineer at NASA's Jet Propulsion Laboratory, Pasadena, California, who is leading conjunction planning for NASA's Curiosity Mars rover. "It is really helpful to have been through this before."

NASA's MAVEN spacecraft, which arrived in Mars orbit last September, will be experiencing its first solar conjunction. Its team has prepared thoroughly. MAVEN -- short for Mars Atmosphere and Volatile Evolution -- will continue monitoring the solar wind reaching Mars and making other measurements. "The data will be stored and transmitted back to us after communications are reestablished at the end of the solar conjunction period," said James Morrissey, MAVEN deputy project manager at NASA's Goddard Space Flight Center, Greenbelt, Maryland.

Transmissions from NASA's two other Mars orbiters -- Mars Odyssey and Mars Reconnaissance Orbiter -- will continue through the conjunction period, but some of those transmissions are not expected to reach Earth. Science data transmitted during conjunction will also remain stored aboard the orbiters, for reliable retransmission in late June. The active Mars rovers -- Curiosity and Opportunity -- will send limited data to orbiters throughout conjunction for relay to Earth during and after conjunction.

Mars Odyssey, which reached Mars in 2001, will be in its seventh solar conjunction. For Opportunity and Mars Reconnaissance Orbiter, the 2015 solar conjunction is the sixth and fifth, respectively.

In preparation for conjunction, orbiter and Curiosity mission teams have been clearing some science data from spacecraft memories to optimize availability of memory for storing science data during the conjunction period. Data that Opportunity collects and sends daily to orbiters will be kept on the orbiters for replay after conjunction. No conjunction-period data from Opportunity will be kept on the rover. Opportunity will operate during conjunction in a mode avoiding use of non-volatile flash memory, the type of memory that can retain data when the rover powers down overnight.

NASA's five current missions at Mars are preparing the way for human-crewed missions there in the 2030s and later, in NASA's Journey to Mars strategy.