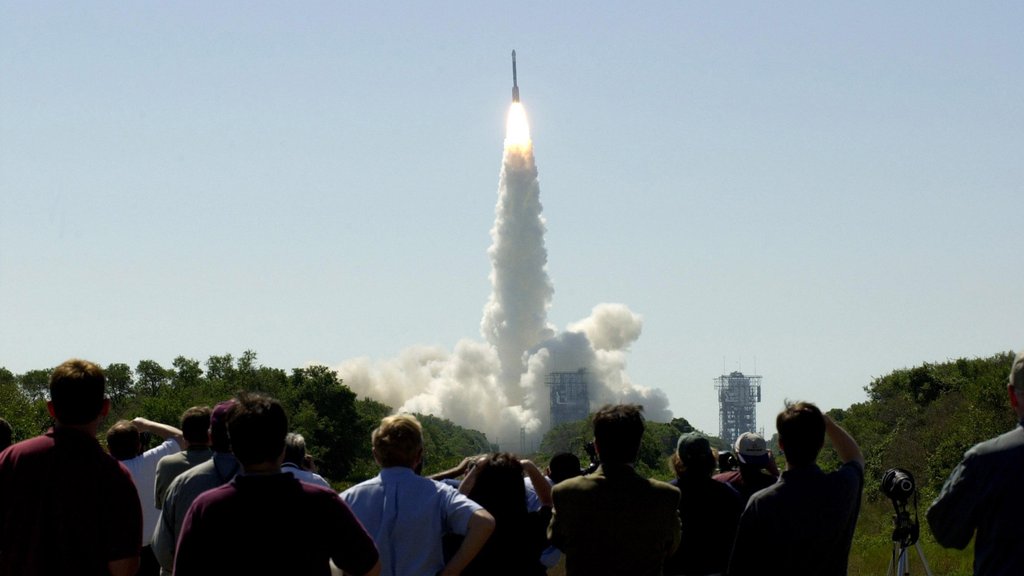 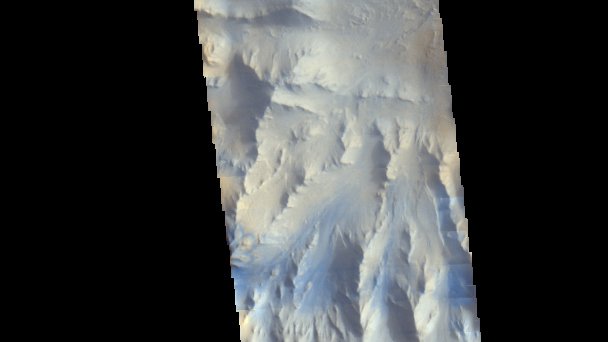 Morning clouds fill Coprates Chasma on Mars in this Nov. 25, 2015, image from the THEMIS camera on NASA's Mars Odyssey. No orbiter systematically observed Mars in morning sunlight before 2015. The clouds appear blue because ice particles in them scatter blue light more strongly than other colors.› Full image and caption
Credit: NASA/JPL-Caltech/Arizona State University

Back-to-back failures of two Mars missions launched in 1999 had prompted an overhaul of NASA's Mars plans. It worked: Not only has Odyssey itself operated successfully longer than any other spacecraft ever sent to Mars, but during Odyssey's lifespan so far, all six subsequent NASA missions sent to Mars have also succeeded.

A Delta II launch vehicle lifted Odyssey from Cape Canaveral Air Force Station, Florida, on April 7, 2001. When the spacecraft reached Mars on Oct. 24, 2001, it fired its main engine to enter orbit. A three-month "aerobraking" phase followed, using carefully controlled dips into the upper atmosphere of Mars to adjust the size and shape of the orbit in preparation for systematic mapping of the Red Planet.

The year of the launch and arrival played into NASA naming the mission 2001 Mars Odyssey as a tribute to the vision and spirit of space exploration portrayed in the works of science-fiction author Arthur C. Clarke, including the best-seller "2001: A Space Odyssey." Clarke (1917-2008) endorsed the mission's naming before the launch.

Odyssey completed its prime mission in 2004. With repeated mission extensions, it became the longevity champion of Mars spacecraft in December 2010.

"Every day for more than five years, Odyssey has been extending its record for how long a spacecraft can keep working at Mars," said Odyssey Project Manager David Lehman of NASA's Jet Propulsion Laboratory, Pasadena, California. "The spacecraft is remarkably healthy, and we have enough fuel to last for several more years."

"In addition to the quality of this spacecraft, the careful way it is operated has been crucial to how it has stayed so productive so long," said Odyssey Project Scientist Jeffrey Plaut of JPL. "Odyssey was designed for a four-year mission. We're in the 15th year, and it keeps doing everything we ask it to do."

Some of Odyssey's important findings were accomplished within the first year after launch. One suite of instruments found evidence for water ice close to the surface in large areas of Mars. Another investigation measured the natural radiation environment on the way from Earth to Mars and in orbit around Mars, gaining information vital for design of human missions in what has become NASA's Journey to Mars.

Odyssey's longevity has enabled other feats, such as complete global mapping of Mars both in daytime light and in nighttime infrared emissions.

Each full year of changing seasons on Mars lasts about 26 months, so Odyssey has observed the planet through more than six Martian years. These observations have revealed some seasonal patterns that repeat each year and other seasonal events, such as large dust storms, which differ significantly from year to year.

Just in the past year, Odyssey's orbit has put the spacecraft in position to observe Mars in early-morning light. Previously, the spacecraft flew over ground that was either in afternoon lighting or pre-dawn darkness. Maneuvers in 2014 and 2015 were designed to alter the geometry of the orbit with respect to the sun. The new geometry enables studies of morning clouds and fogs and comparison of ground temperatures in the morning to temperatures of the same sites in the afternoon and pre-dawn.

In addition to its direct contributions to planetary science, Odyssey provides important support for other missions in NASA's Journey to Mars through communication relay service and observations of candidate landing sites. More than 90 percent of the data received from NASA's Spirit and Opportunity rovers has been relayed via Odyssey. Relay support for NASA's Curiosity Mars rover is shared between the Mars Reconnaissance Orbiter and Odyssey.