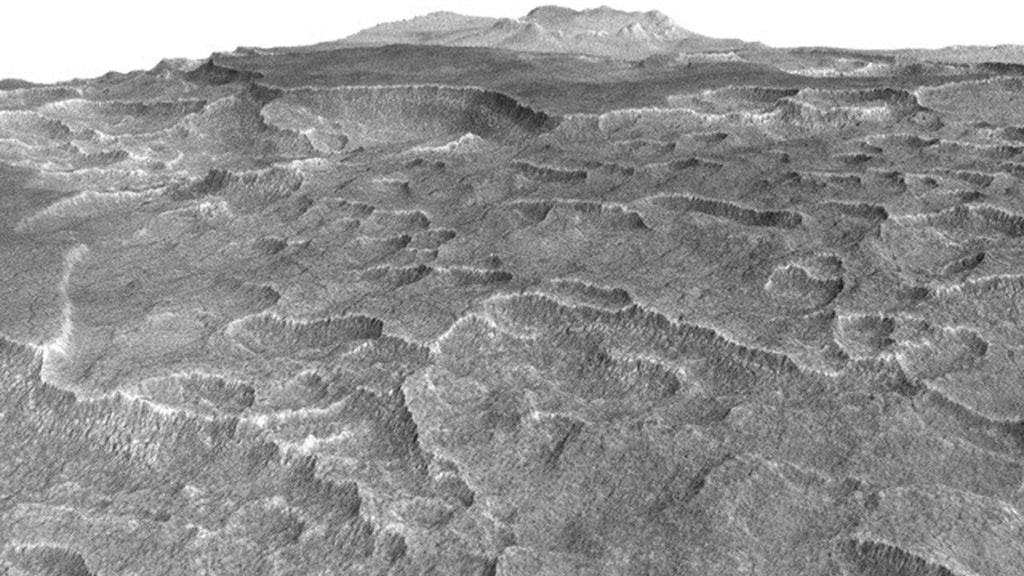 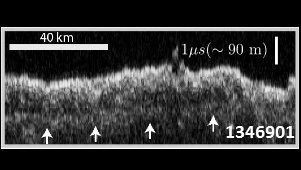 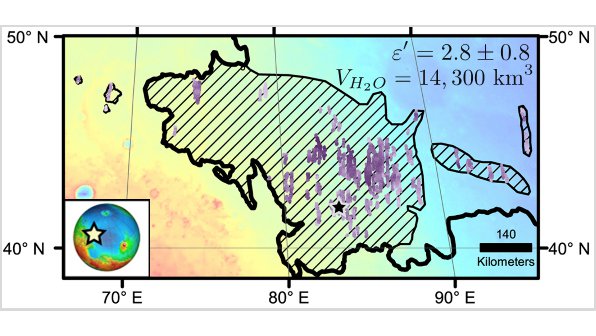 Diagonal striping on this map of a portion of Mars' Utopia Planitia region indicates the area where a large subsurface deposit rich in water ice was assessed using the Shallow Radar (SHARAD) instrument on NASA's Mars Reconnaissance Orbiter.› Full image and caption
Credit: NASA/JPL-Caltech/Univ. of Rome/ASI/PSI

Frozen beneath cracked, pitted plains on Mars lies about as much water as is in Lake Superior, researchers using NASA's Mars Reconnaissance Orbiter have determined.

› Water ice makes up half or more of an underground layer in a large region of Mars about halfway from the equator to the north pole.

› The amount of water in this deposit is about as much as in Lake Superior. It was assessed using a radar aboard a NASA spacecraft orbiting Mars.

› This research advances understanding about Mars' history and identifies a possible resource for future astronauts.

Frozen beneath a region of cracked and pitted plains on Mars lies about as much water as what's in Lake Superior, largest of the Great Lakes, researchers using NASA's Mars Reconnaissance Orbiter have determined.

Scientists examined part of Mars' Utopia Planitia region, in the mid-northern latitudes, with the orbiter's ground-penetrating Shallow Radar (SHARAD) instrument. Analyses of data from more than 600 overhead passes with the onboard radar instrument reveal a deposit more extensive in area than the state of New Mexico. The deposit ranges in thickness from about 260 feet (80 meters) to about 560 feet (170 meters), with a composition that's 50 to 85 percent water ice, mixed with dust or larger rocky particles.

At the latitude of this deposit -- about halfway from the equator to the pole -- water ice cannot persist on the surface of Mars today. It sublimes into water vapor in the planet's thin, dry atmosphere. The Utopia deposit is shielded from the atmosphere by a soil covering estimated to be about 3 to 33 feet (1 to 10 meters) thick.

"This deposit probably formed as snowfall accumulating into an ice sheet mixed with dust during a period in Mars history when the planet's axis was more tilted than it is today," said Cassie Stuurman of the Institute for Geophysics at the University of Texas, Austin. She is the lead author of a report in the journal Geophysical Research Letters.

Mars today, with an axial tilt of 25 degrees, accumulates large amounts of water ice at the poles. In cycles lasting about 120,000 years, the tilt varies to nearly twice that much, heating the poles and driving ice to middle latitudes. Climate modeling and previous findings of buried, mid-latitude ice indicate that frozen water accumulates away from the poles during high-tilt periods.

Martian Water as a Future Resource

The name Utopia Planitia translates loosely as the "plains of paradise." The newly surveyed ice deposit spans latitudes from 39 to 49 degrees within the plains. It represents less than one percent of all known water ice on Mars, but it more than doubles the volume of thick, buried ice sheets known in the northern plains. Ice deposits close to the surface are being considered as a resource for astronauts.

"This deposit is probably more accessible than most water ice on Mars, because it is at a relatively low latitude and it lies in a flat, smooth area where landing a spacecraft would be easier than at some of the other areas with buried ice," said Jack Holt of the University of Texas, a co-author of the Utopia paper who is a SHARAD co-investigator and has previously used radar to study Martian ice in buried glaciers and the polar caps.

The Utopian water is all frozen now. If there were a melted layer -- which would be significant for the possibility of life on Mars -- it would have been evident in the radar scans. However, some melting can't be ruled out during different climate conditions when the planet's axis was more tilted. "Where water ice has been around for a long time, we just don't know whether there could have been enough liquid water at some point for supporting microbial life," Holt said.

Utopia Planitia is a basin with a diameter of about 2,050 miles (3,300 kilometers), resulting from a major impact early in Mars' history and subsequently filled. NASA sent the Viking 2 Lander to a site near the center of Utopia in 1976. The portion examined by Stuurman and colleagues lies southwest of that long-silent lander.

Use of the Italian-built SHARAD instrument for examining part of Utopia Planitia was prompted by Gordon Osinski at Western University in Ontario, Canada, a co-author of the study. For many years, he and other researchers have been intrigued by ground-surface patterns there such as polygonal cracking and rimless pits called scalloped depressions -- "like someone took an ice-cream scoop to the ground," said Stuurman, who started this project while a student at Western.

In the Canadian Arctic, similar landforms are indicative of ground ice, Osinski noted, "but there was an outstanding question as to whether any ice was still present at the Martian Utopia or whether it had been lost over the millions of years since the formation of these polygons and depressions."

The large volume of ice detected with SHARAD advances understanding about Mars' history and identifies a possible resource for future use.

"It's important to expand what we know about the distribution and quantity of Martian water," said Mars Reconnaissance Orbiter Deputy Project Scientist Leslie Tamppari, of NASA's Jet Propulsion Laboratory, Pasadena, California. "We know early Mars had enough liquid water on the surface for rivers and lakes. Where did it go? Much of it left the planet from the top of the atmosphere. Other missions have been examining that process. But there's also a large quantity that is now underground ice, and we want to keep learning more about that."

Joe Levy of the University of Texas, a co-author of the new study, said, "The ice deposits in Utopia Planitia aren't just an exploration resource, they're also one of the most accessible climate change records on Mars. We don't understand fully why ice has built up in some areas of the Martian surface and not in others. Sampling and using this ice with a future mission could help keep astronauts alive, while also helping them unlock the secrets of Martian ice ages."

SHARAD is one of six science instruments on the Mars Reconnaissance Orbiter, which began its prime science phase 10 years ago this month. The mission's longevity is enabling studies of features and active processes all around Mars, from subsurface to upper atmosphere. The Italian Space Agency provided the SHARAD instrument and Sapienza University of Rome leads its operations. The Planetary Science Institute, based in Tucson, Arizona, leads U.S. involvement in SHARAD. JPL, a division of Caltech in Pasadena, manages the orbiter mission for NASA's Science Mission Directorate in Washington. Lockheed Martin Space Systems of Denver built the spacecraft and supports its operations.