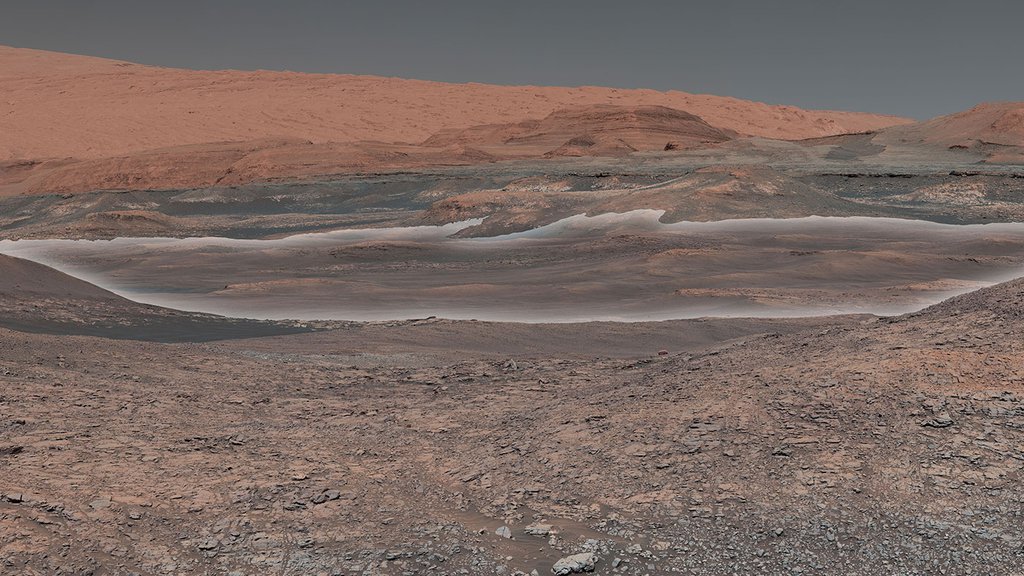 This mosaic taken by NASA's Mars Curiosity rover looks uphill at Mount Sharp, which Curiosity has been climbing since 2014. Highlighted in white is an area with clay-bearing rocks that scientists are eager to explore; it could shed additional light on the role of water in creating Mount Sharp. The mosaic was assembled from dozens of images taken by Curiosity's Mast Camera (Mastcam). It was taken on Sol 1931 back in January.› Full image and caption
Credit: NASA/JPL-Caltech/MSSS

NASA's Mars Curiosity rover just hit a new milestone: its two-thousandth Martian day on the Red Planet. An image mosaic taken recently offers a preview of what comes next.

NASA's Mars Curiosity rover just hit a new milestone: its two-thousandth Martian day, or sol, on the Red Planet. An image mosaic taken by the rover in January offers a preview of what comes next.

Looming over the image is Mount Sharp, the mound Curiosity has been climbing since September 2014. In the center of the image is the rover's next big, scientific target: an area scientists have studied from orbit and have determined contains clay minerals.

The formation of clay minerals requires water. Scientists have already determined that the lower layers of Mount Sharp formed within lakes that once spanned Gale Crater's floor. The area ahead could offer additional insight into the presence of water, how long it may have persisted, and whether the ancient environment may have been suitable for life.

Curiosity's science team is eager to analyze rock samples pulled from the clay-bearing rocks seen in the center of the image. The rover recently started testing its drill again on Mars for the first time since December 2016. A new process for drilling rock samples and delivering them to the rover's onboard laboratories is still being refined in preparation for scientific targets like the area with clay minerals.

Curiosity landed in August 2012 and has traveled 11.6 miles (18.7 kilometers) in that time. In 2013, the mission found evidence of an ancient freshwater-lake environment that offered all the basic chemical ingredients for microbial life. Since reaching Mount Sharp in 2014, Curiosity has examined environments where both waterand wind have left their marks. Having studied more than 600 vertical feet of rock with signs of lakes and groundwater, Curiosity's international science team concluded that habitable conditions lasted for at leastmillions of years.

More information about Curiosity is available at: