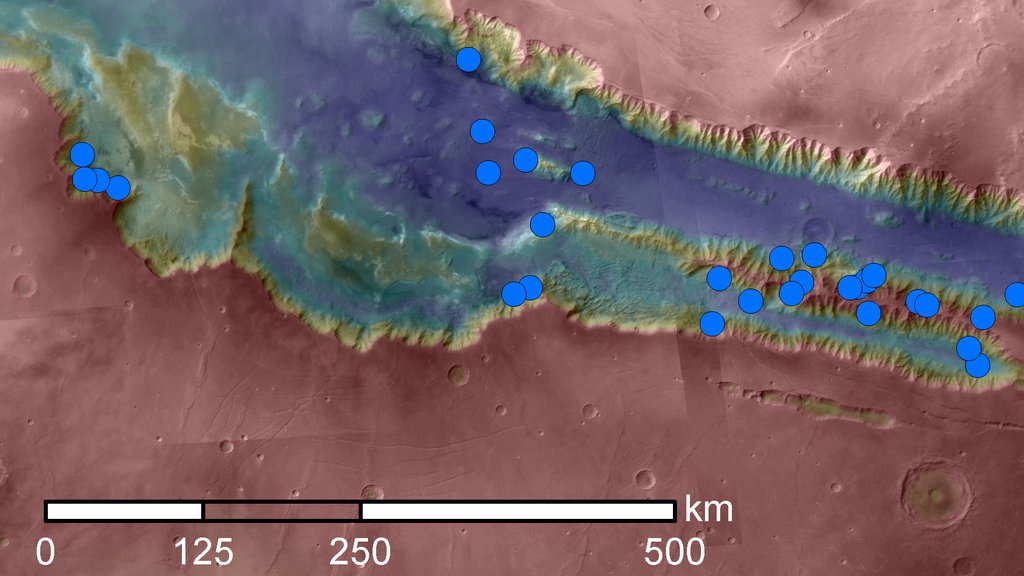 Blue dots on this map indicate sites of recurring slope lineae (RSL) in part of the Valles Marineris canyon network on Mars. RSL are seasonal dark streaks that may be indicators of liquid water. The area mapped here has the highest density of known RSL on Mars.› Full image and caption
Credit: NASA/JPL-Caltech/Univ. of Arizona 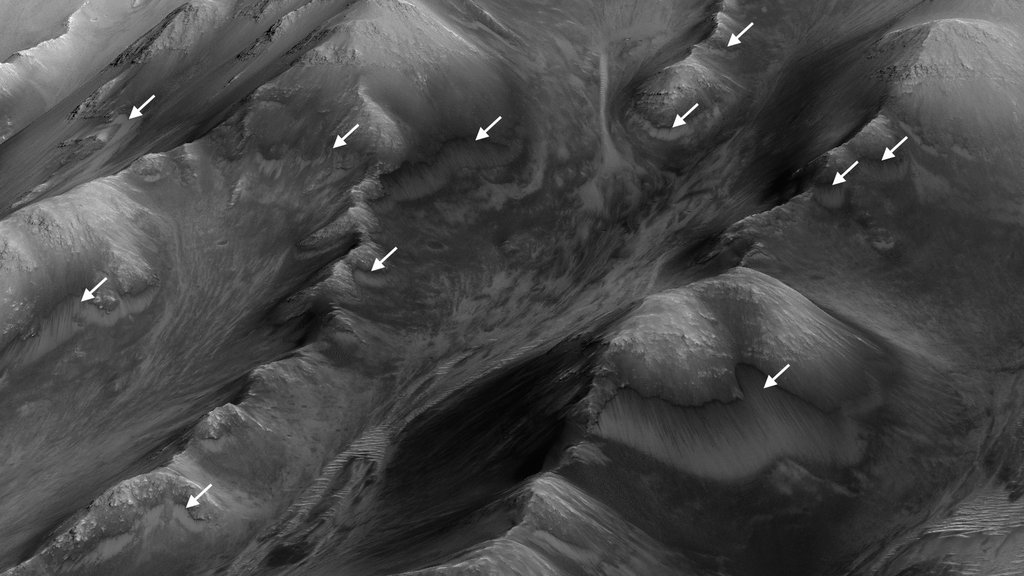 The white arrows indicate locations in this scene where numerous seasonal dark streaks, called "recurring slope lineae," have been identified in the Coprates Montes area of Mars' Valles Marineris by repeated observations from orbit.› Full image and caption
Credit: NASA/JPL-Caltech/Univ. of Arizona

› Big canyons on Mars hold thousands of seasonal dark streaks examined in a new study of such features, which might be signs of liquid water.

› The seasonal streaks at many locations are unlikely to result from underground water reaching the surface.

› Salts drawing water vapor from the atmosphere might be a key mechanism in how these streaks form, but puzzles and other possibilities remain.

The study published today investigated thousands of these warm-season features in the Valles Marineris region near Mars' equator. Some of the sites displaying the seasonal flows are canyon ridges and isolated peaks, ground shapes that make it hard to explain the streaks as resulting from underground water directly reaching the surface. It is highly unlikely that shallow ground ice would be present as a source for seasonal melting, given the warm temperatures in the equatorial canyons.

Water pulled from the atmosphere by salts, or mechanisms with no flowing water involved, remain possible explanations for the features at these sites.

These features are called recurring slope lineae, or RSL, a mouthful chosen to describe them without implying how they form. Since their discovery in 2011, Martian RSL have become one of the hottest topics in planetary exploration, the strongest evidence for any liquid water on the surface of modern Mars, even if transient. They appear as dark lines extending downslope during a warm season, then fading away during colder parts of the year, then repeating the progression in a following year. Water, in the form of hydrated salts, was confirmed at some RSL sites last year, including in Valles Marineris.

Research results published today present many findings from detailed observation of 41 RSL sites in central and eastern portions of Valles Marineris, the largest canyon system in the solar system. Each site is defined as the size of a single image from the High Resolution Imaging Science Experiment (HiRISE) camera on NASA's Mars Reconnaissance Orbiter: about 3.4 miles by 8 miles (5.4 by 12 kilometers). The number of individual lineae (flows) in each site ranges from a few to more than 1,000.

"There are so many of them, it's hard to keep track," said Matthew Chojnacki of the University of Arizona's Lunar and Planetary Laboratory, Tucson, and lead author of today's report in the Journal of Geophysical Research: Planets. "The occurrence of recurring slope lineae in these canyons is much more widespread than previously recognized. As far as we can tell, this is the densest population of them on the planet, so if they are indeed associated with contemporary aqueous activity, that makes this canyon system an even more interesting area than it is just from the spectacular geology alone."

The possibility of liquid water at or near the surface of Mars carries major ramifications for investigating whether life exists on Mars, since all known life relies on liquid water. Either liquid or frozen water near the surface could become an important resource for humans on Mars. Fresh crater impacts and other data have revealed water ice close to the surface at many locations in middle and high latitudes of Mars. If RSL are indicators of water, they extend possible water-access sites to low latitudes.

If water is involved in forming RSL, what is the mechanism? Seeking an answer, Chojnacki and five co-authors examined the geological context of canyonland RSL sites and also calculated how much water would need to be present if the streaks are due to liquid water seeping through a thin surface layer to darken the ground.

Many of the sites where RSL were previously identified are on inner walls of impact craters. At that type of site, a conceivable explanation could be that an extensive underground layer holding water was punctured by the crater-forming impact long ago and still feeds warm-season flows. No such underground layer fits the ridge or peak shapes at several of the RSL sites in the new study.

Another possible mechanism previously proposed for RSL is that some types of salts so strongly pull water vapor out of the Martian atmosphere that liquid brine forms at the ground surface. The new study bolsters the link between RSL and salts. Some sites bear bright, persistent streaks near the dark, seasonal ones. The bright streaks might result from salt left behind after evaporation of brine.

"There are problems with the mechanism of pulling water from the atmosphere, too," Chojnacki said. If it is seeping water that darkens RSL, the amount of liquid water required each year to form the streaks in the studied portion of Valles Marineris would total about 10 to 40 Olympic-size swimming pools (about 30,000 to 100,000 cubic meters), the researchers estimate. The amount of water vapor in the atmosphere above the whole Valles Marineris region is larger than that, but researchers have not identified a process efficient enough at extracting water from the atmosphere to get that much onto the surface.

"There do seem to be more ways atmosphere and surface interact in the canyons than in blander topography, such as clouds trailing out of the canyons and low-lying haze in the canyons." he said. "Perhaps the atmosphere-surface interactions in this region are associated with the high abundance of recurring slope lineae. We can't rule that out, but a mechanism to make the connection is far from clear."

An RSL-forming mechanism with very limited flowing water may also be possible. Based on an Earth resident's experience, it's easy to see a resemblance to wet ground extending from seeping water, but Mars is foreign, even when it looks familiar. Water-free processes do produce other flow features on Mars. RSL's formation mechanism might be entirely dry, or perhaps a hybrid "damp" model requiring much less water than suggested by flowing-water mechanisms.

Another factor added by the new study is that RSL not only darken the surface, but are also associated with material moving downslope. The new study documents slumping and other three-dimensional changes at some RSL sites, occurring seasonally in tandem with the streaks.

Other studies of RSL, including laboratory experiments simulating them on Earth, are in progress. The report published today offers this interim conclusion: "Collectively, results provide additional support for the notion that significant amounts of near-surface water can be found on Mars today and suggest that a widespread mechanism, possibly related to the atmosphere, is recharging RSL sources."