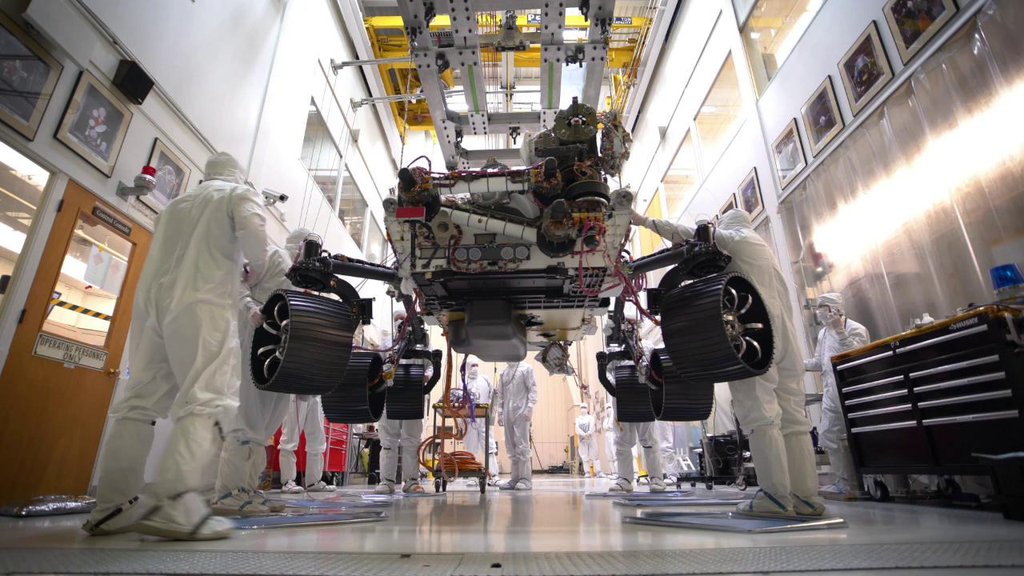 This time-lapse video, taken on Oct. 8, 2019, at NASA's Jet Propulsion Laboratory in Pasadena, California, captures the first time the Mars 2020 rover carries its full weight on its legs and wheels. The rover was photographed in JPL's Simulator Building, where it underwent weeks of testing. Image caption: NASA/JPL-Caltech

In time-lapse video, taken at JPL, captures the first time NASA's Mars 2020 rover carries its full weight on its legs and wheels.

This time-lapse video, taken on Oct. 8, 2019, at NASA's Jet Propulsion Laboratory in Pasadena, California, captures the first time NASA's Mars 2020 rover has carried its full weight on its legs and wheels.

"After years of design, analysis and testing, it is fantastic to see the rover on her wheels for the first time," said Ben Riggs, a mechanical systems engineer working on Mars 2020 at JPL. "The whole team looks forward to seeing her in the same configuration on Mars in the not too distant future."

The rover's legs (the black tubing visible above the wheels) are composed of titanium, while the wheels are made of aluminum. Measuring 20.7 inches (52.5 centimeters) in diameter and machined with traction-providing cleats, or grousers, the wheels are engineering models that will be replaced with flight models next year. Every wheel has its own motor. The two front and two rear wheels also have individual steering motors that enable the vehicle to turn a full 360 degrees in place.

When driving over uneven terrain, the rover's "rocker-bogie" suspension system - called that because of its multiple pivot points and struts - maintains a relatively constant weight on each wheel for stability. Rover drivers avoid terrain that would cause the vehicle to tilt more than 30 degrees, but even so, the rover can handle a 45-degree tilt in any direction without tipping over. It can also roll over obstacles and through depressions the size of its wheels.

The Mars 2020 rover was photographed in the Simulator Building at JPL, where it underwent weeks of testing, including an extensive evaluation of how its instruments, systems and subsystems operate in the frigid, near-vacuum environment it will face on Mars.

Interested K-12 students in U.S. public, private and home schools have one more week to enter the Mars 2020 Name the Rover essay contest. One grand prize winner will name the rover. The contest closes Nov. 1, 2019.