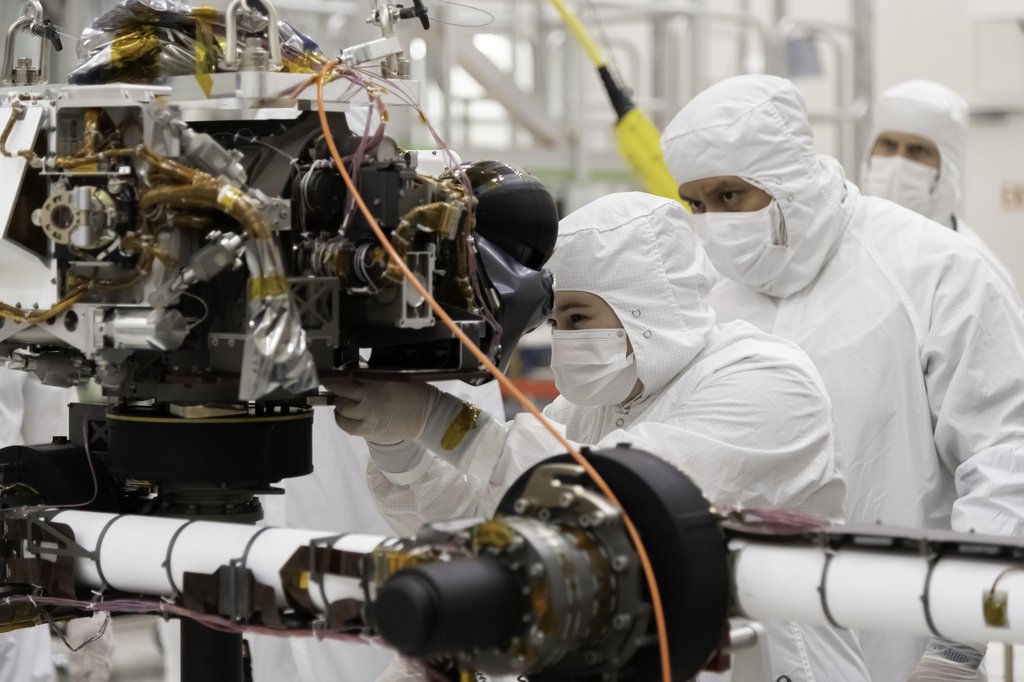 Engineers at JPL install a sensor-filled turret on the end of the rover's seven-foot-long (2.1-meter-long) robotic arm. The image was taken on July 11, 2019.
Credit: NASA/JPL-Caltech
Full Image Details

"Back when we started this project in 2013, we came up with a timeline to chart mission progress," said John McNamee, Mars 2020 project manager at NASA's Jet Propulsion Laboratory in Pasadena, California. "That every single major spacecraft component on a project with this level of innovation is synching right now with that timeline is a testament to the innovation and perseverance of a great team."

In this image, taken on July 11, 2019, engineers at JPL install a sensor-filled turret on the end of the rover's 7-foot-long (2.1-meter-long) robotic arm. The rover's turret includes HD cameras, the Scanning Habitable Environments with Raman & Luminescence for Organics & Chemicals (SHERLOC) science instrument, the Planetary Instrument for X-ray Lithochemistry (PIXL), and a percussive drill and coring mechanism.

On Mars, the arm and turret will work together, allowing the rover to work as a human geologist would: by reaching out to interesting geologic features, scraping, analyzing and even collecting them for further study via Mars 2020's Sample Caching System, which includes 17 motors and will collect samples of Martian rock and soil that will be returned to Earth by a future mission.