This high-definition image was taken on Sept. 7, 2018, during the third and final test flight of the ASPIRE payload. It was the fastest inflation of this size parachute in history and created a peak load of almost 70,000 pounds of force.
Credit: NASA/JPL-Caltech 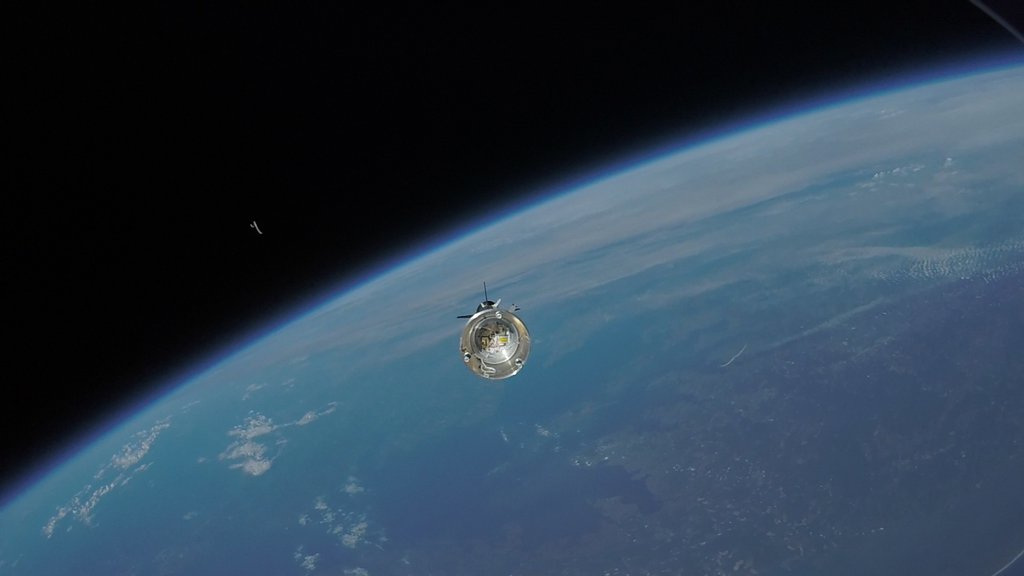 In this image, the second stage of the Black Brant IX sounding rocket separates from the ASPIRE payload. The third and final flight test of the ASPIRE payload was launched from NASA's Wallops Flight Facility on Sept. 7, 2018.
Credit: NASA/JPL-Caltech

The supersonic parachute that will handle the heaviest payload yet to the Red Planet - Mars 2020 rover - passes its final sounding rocket test with flying colors.

In the early hours of Sept. 7, NASA broke a world record.

Less than 2 minutes after the launch of a 58-foot-tall (17.7-meter) Black Brant IX sounding rocket, a payload separated and began its dive back through Earth's atmosphere. When onboard sensors determined the payload had reached the appropriate height and Mach number (38 kilometers altitude, Mach 1.8), the payload deployed a parachute. Within four-tenths of a second, the 180-pound parachute billowed out from being a solid cylinder to being fully inflated.

It was the fastest inflation in history of a parachute this size and created a peak load of almost 70,000 pounds of force.

This wasn't just any parachute. The mass of nylon, Technora and Kevlar fibers that make up the parachute will play an integral part in landing NASA's state-of-the-art Mars 2020 rover on the Red Planet in February 2021. The Jet Propulsion Laboratory's Advanced Supersonic Parachute Inflation Research Experiment (ASPIRE) project conducted a series of sounding rocket tests to help decide which parachute design to use on the Mars 2020 mission.

On Oct. 3, NASA's Mars 2020 mission management and members of its Entry, Descent, and Landing team met at JPL in Pasadena, California, and determined that the strengthened parachute had passed its tests and was ready for its Martian debut.

"Mars 2020 will be carrying the heaviest payload yet to the surface of Mars, and like all our prior Mars missions, we only have one parachute and it has to work," said John McNamee, project manager of Mars 2020 at JPL. "The ASPIRE tests have shown in remarkable detail how our parachute will react when it is first deployed into a supersonic flow high above Mars. And let me tell you, it looks beautiful."

The 67,000-pound (37,000-kilogram) load was the highest ever survived by a supersonic parachute. That's about an 85-percent higher load than what scientists would expect the Mars 2020 parachute to encounter during its deployment in Mars' atmosphere.

"Earth's atmosphere near the surface is much denser than that near the Martian surface, by about 100 times," said Ian Clark, the test's technical lead from JPL. "But high up - around 23 miles (37 kilometers) - the atmospheric density on Earth is very similar to 6 miles (10 kilometers) above Mars, which happens to be the altitude that Mars 2020 will deploy its parachute."

With the ASPIRE tests complete, the endeavors of Clark and his compatriots will be confined to the lower part of the stratosphere for the time being. But that doesn't mean the fun times are over.

"We are all about helping 2020 stick its landing 28 months from now," said Clark. "I may not get to shoot rockets to the edge of space for a while, but when it comes to Mars - and when it comes to getting there and getting down there safely - there are always exciting challenges to work on around here."