Mapping the Chemistry Needed for Life at Europa 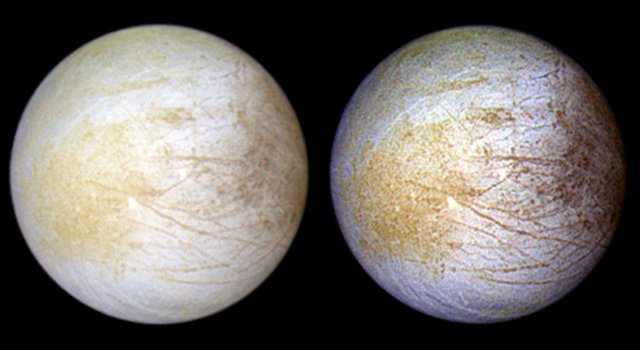 This color composite view combines violet, green, and infrared images of Jupiter's intriguing moon, Europa, for a view of the moon in natural color (left) and in enhanced color designed to bring out subtle color differences in the surface (right). The bright white and bluish part of Europa's surface is composed mostly of water ice, with very few non-ice materials. In contrast, the brownish mottled regions on the right side of the image may be covered by hydrated salts and an unknown red component. The yellowish mottled terrain on the left side of the image is caused by some other unknown component. Long, dark lines are fractures in the crust, some of which are more than 3,000 kilometers (1,850 miles) long.› Full image and caption
Credit: NASA/JPL/University of Arizona

A new study led by a NASA researcher provides the first observations of the global distribution of hydrogen peroxide across the surface of Jupiter's moon Europa.

A new paper led by a NASA researcher shows that hydrogen peroxide is abundant across much of the surface of Jupiter's moon Europa. The authors argue that if the peroxide on the surface of Europa mixes into the ocean below, it could be an important energy supply for simple forms of life, if life were to exist there. The paper was published online recently in the Astrophysical Journal Letters.

"Life as we know it needs liquid water, elements like carbon, nitrogen, phosphorus and sulfur, and it needs some form of chemical or light energy to get the business of life done," said Kevin Hand, the paper's lead author, based at NASA's Jet Propulsion Laboratory, Pasadena, Calif. "Europa has the liquid water and elements, and we think that compounds like peroxide might be an important part of the energy requirement. The availability of oxidants like peroxide on Earth was a critical part of the rise of complex, multicellular life."

The paper, co-authored by Mike Brown of the California Institute of Technology in Pasadena, analyzed data in the near-infrared range of light from Europa, using the Keck II Telescope on Mauna Kea, Hawaii, over four nights in September 2011. The highest concentration of peroxide found was on the side of Europa that always leads in its orbit around Jupiter, with a peroxide abundance of 0.12 percent relative to water. (For perspective, this is roughly 20 times more diluted than the hydrogen peroxide mixture available at drug stores.) The concentration of peroxide in Europa's ice then drops off to nearly zero on the hemisphere of Europa that faces backward in its orbit.

Hydrogen peroxide was first detected on Europa by NASA's Galileo mission, which explored the Jupiter system from 1995 to 2003, but Galileo observations were of a limited region. The new results show that peroxide is widespread across much of the surface of Europa, and the highest concentrations are reached in regions where Europa's ice is nearly pure water with very little sulfur contamination. The peroxide is created by the intense radiation processing of Europa's surface ice that comes from the moon's location within Jupiter's strong magnetic field.

"The Galileo measurements gave us tantalizing hints of what might be happening all over the surface of Europa, and we've now been able to quantify that with our Keck telescope observations," Brown said. "What we still don't know is how the surface and the ocean mix, which would provide a mechanism for any life to use the peroxide."

The study was funded in part by the NASA Astrobiology Institute through the Icy Worlds team based at JPL, a division of Caltech. The NASA Astrobiology Institute, based at NASA's Ames Research Center, Moffett Field, Calif., is a partnership among NASA, 15 U.S. teams and 13 international consortia. The Institute is part of NASA's astrobiology program, which supports research into the origin, evolution, distribution and future of life on Earth and the potential for life elsewhere.