Looking Back at the Jupiter Crash 20 Years Later 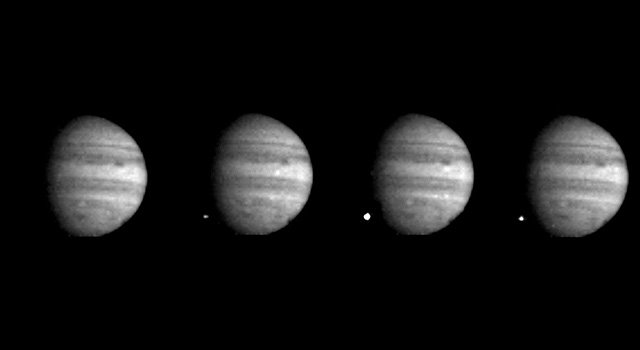 Twenty years ago, space assets from NASA/JPL watched as the fragments of comet Shoemaker-Levy 9 made their historic plunge into the atmosphere of Jupiter.

Twenty years ago, human and robotic eyes observed the first recorded impact between cosmic bodies in the solar system, as fragments of comet Shoemaker-Levy 9 slammed into the atmosphere of Jupiter. Between July 16 and July 22, 1994, space- and Earth-based assets managed by NASA's Jet Propulsion Laboratory in Pasadena, California, joined an armada of other NASA and international telescopes, straining to get a glimpse of the historic event:

- NASA's Galileo spacecraft, still a year-and-a-half out from its arrival at Jupiter, had a unique view of fireballs that erupted from Jupiter's southern hemisphere as the comet fragments struck.

- NASA's Hubble Space Telescope, using the JPL-developed and -built Wide Field and Planetary Camera 2, observed the comet and the impact scars it left on Jupiter.

- The giant radio telescopes of NASA's Deep Space Network -- which perform radio and radar astronomy research in addition to their communications functions -- were tasked with observing radio emissions from Jupiter's radiation belt, looking for disturbances caused by comet dust.

- NASA's Voyager 2 spacecraft, then about 3.7 billion miles (6 billion kilometers) from Jupiter, observed the impacts with its ultraviolet spectrometer and a planetary radio astronomy instrument.

- The Ulysses spacecraft also made observations during the comet impact from about 500 million miles (800 million kilometers) away. Ulysses observed radio transmissions from Jupiter with its combined radio wave and plasma wave instrument.

The work of scientists in studying the Shoemaker-Levy 9 impact raised awareness about the potential for asteroid impacts on Earth and the need for predicting them ahead of time, important factors in the formation of NASA's Near-Earth Object Program Office. The NEO Program Office coordinates NASA-sponsored efforts to detect, track and characterize potentially hazardous asteroids and comets that could approach Earth.

The Galileo mission was managed by NASA's Jet Propulsion Laboratory in Pasadena, California, for the agency's Science Mission Directorate. JPL also manages the Voyager mission and the Deep Space Network for NASA. NASA's Near-Earth Object Program at NASA Headquarters, Washington, manages and funds the search, study and monitoring of asteroids and comets whose orbits periodically bring them close to Earth. JPL manages the Near-Earth Object Program Office for NASA's Science Mission Directorate in Washington. JPL is a division of the California Institute of Technology, Pasadena.

For more information about the Shoemaker-Levy 9 impact, visit: http://solarsystem.nasa.gov/planets/profile.cfm?Object=Com_PShoemakerLevy9