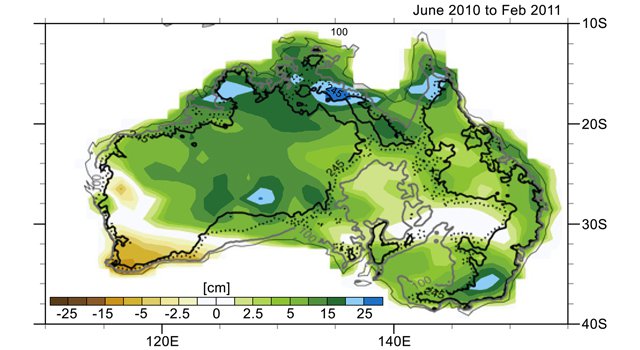 Changes in Australia's mass as reported by data from NASA's Gravity Recovery and Climate Experiment (GRACE) satellites from June 2010 to February 2011. Areas in greens and blues depict the greatest increases in mass, caused by excessive precipitation. The contour lines represent various land surface elevations. A new study co-authored and co-funded by NASA finds extensive flooding in Australia, combined with the continent's soils and unique topography, were the biggest contributors to the drop in global sea level observed in 2010 and 2011.
Credit: NCAR/NASA/JPL-Caltech

A new NASA co-funded study finds the 'Land Down Under' played a unique and complex role in the temporary drop in global sea level observed from 2010 to 2011.

A unique and complex set of circumstances came together over Australia from 2010 to 2011 to cause Earth's smallest continent to be the biggest contributor to the observed drop in global sea level rise during that time, finds a new study co-authored and co-funded by NASA.