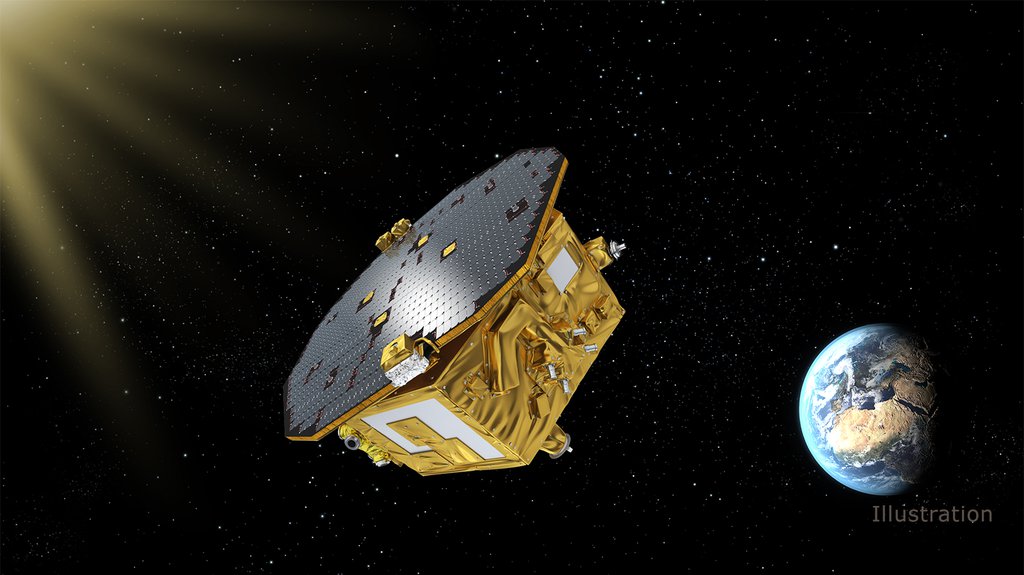 The LISA Pathfinder spacecraft, which launched on Dec. 3, 2015, from Kourou, French Guiana, will help pave the way for a mission to detect gravitational waves.
Credit: ESA 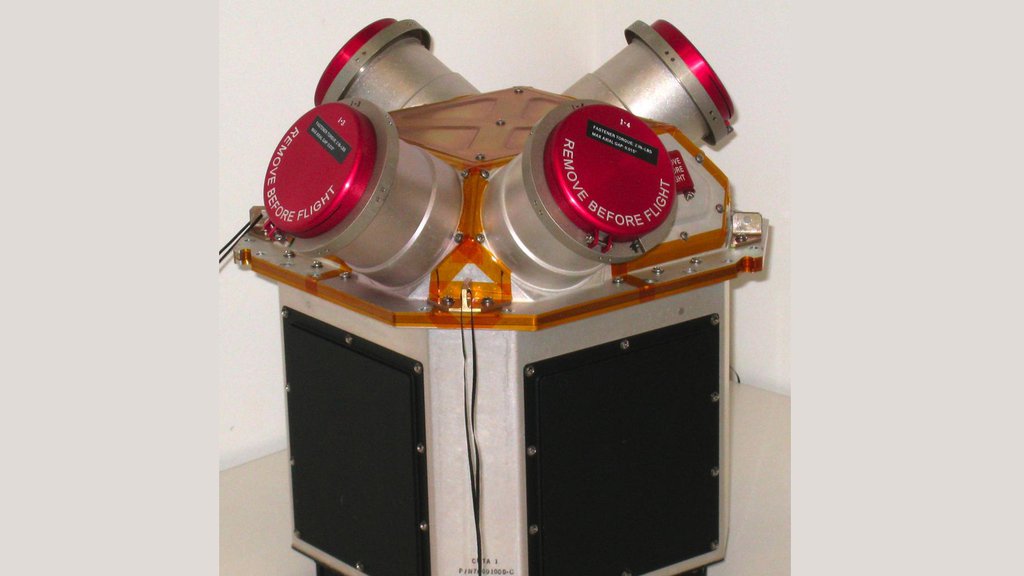 The LISA Pathfinder spacecraft is on its way to space, having successfully launched from Kourou, French Guiana (Dec. 3 local time/Dec. 2 PST).

The LISA Pathfinder spacecraft is on its way to space, having successfully launched from Kourou, French Guiana (Dec. 3 local time/Dec. 2 PST). On board is the state-of-the-art Disturbance Reduction System (DRS), a thruster technology developed at NASA's Jet Propulsion Laboratory, Pasadena, California.

The incredible faintness of gravitational waves makes it critical to keep a spacecraft stable enough to detect them. But there are obstacles to staying completely still, even in seemingly empty space. Most notably, solar radiation pressure -- the force exerted by sunlight -- pushes on the spacecraft ever so delicately. In fact, the force of solar radiation pressure on LISA Pathfinder is analogous to the weight of a grain of sand on earth.

The Disturbance Reduction System uses colloid micronewton thrusters, the first of their kind, to keep the spacecraft as still as possible and compensate for solar pressure. These thrusters electrically charge small liquid droplets and accelerate them through an electric field in order to generate thrust. Developed by Busek Co., Natick, Massachusetts, with technical support from JPL, the thrusters will deliver 5 to 30 micronewtons of thrust (about the weight of a mosquito) continuously, with exquisite precision, to counteract the force of sunlight.

The DRS microthrusters aim to control the spacecraft's position to within a millionth of a millimeter, using software provided by NASA's Goddard Spaceflight Center, Greenbelt, Maryland.

"The DRS is one of the most precise thruster systems for a spacecraft ever qualified for use in space," said Phil Barela, DRS project manager at JPL.

To test the concept of gravitational-wave detection technology, LISA Pathfinder uses two cube-shaped test masses. These masses are objects designed to respond -- to the greatest extent possible -- only to gravity. They are made of a mixture of gold and platinum, which means they are very dense and also non-magnetic. Each weighs about 4 pounds (2 kilograms) and measures 1.8 inches (4.6 centimeters) on a side. The masses will float in separate vacuum chambers, 15 inches (38 centimeters) apart.

The spacecraft's position will be continuously adjusted using its ultra-precise thrusters to stay centered about these test masses. Using lasers, the position of the freely floating test masses will be measured, by an ESA-provided interferometer instrument, to an accuracy of 100,000th of the width of a human hair.

LISA Pathfinder will not directly detect gravitational waves, but it will demonstrate technologies necessary to observe these mysterious phenomena. A full-scale observatory could use the same kind of sensors, but they would be housed in three individual spacecraft separated by about 600,000 miles (1 million kilometers). Scientists could then measure how gravitational waves change the distance between the test masses, which would be a difference on the scale of picometers (one picometer is one trillionth of a meter).

"A system akin to the DRS could be used on a future gravitational-wave mission for stability," said Charles Dunn, project technologist for the DRS at JPL.

The DRS may also pave the way for similar advanced thruster systems like it to be used by other spacecraft. For example, a DRS-like system could be used to stabilize a future spacecraft that needs to be very still in order to detect exoplanets.

DRS could also be used for formation flying. For example, a constellation of small satellites could incorporate the thrusters in order to be perfectly synchronous while flying together. Even a single satellite in Earth orbit could benefit from DRS, as the system would allow for fine control of its path.

LISA Pathfinder launched on a Vega rocket and will take about seven weeks to reach its operational orbit. The spacecraft will orbit what is called the Lagrange Point L1, about 930,000 miles (1.5 million kilometers) from Earth in the direction of the sun.

The spacecraft will then begin a six-week commissioning period followed by eight months of technology demonstration. ESA's LISA Technology Package, with a different set of cold gas thrusters and separate software that controls them, will be demonstrated for the first four months. The DRS will be tested for about four months after that.