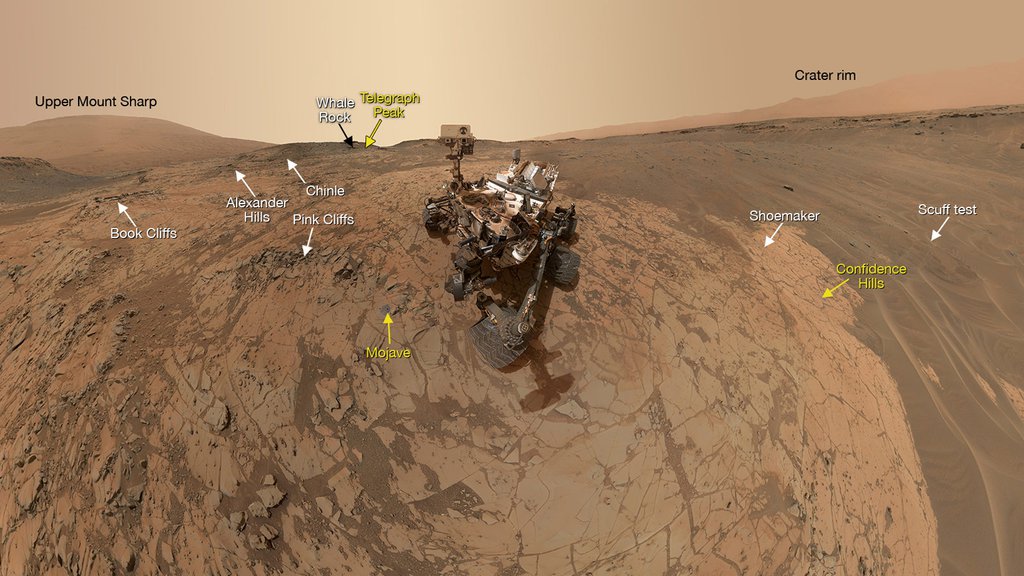 This self-portrait of NASA's Curiosity Mars rover shows the vehicle at the "Mojave" site, where its drill collected the mission's second taste of Mount Sharp.› Full image and caption
Credit: NASA/JPL-Caltech/MSSS |

NASA's Curiosity Mars rover used the camera on its robotic arm to record the pieces of a portrait that shows the rover within a panorama of the area it is studying.

A sweeping view of the "Pahrump Hills" outcrop on Mars, where NASA's Curiosity rover has been working for five months, surrounds the rover in Curiosity's latest self-portrait.

The selfie scene is assembled from dozens of images taken by the Mars Hand Lens Imager (MAHLI) camera on the rover's robotic arm.

Pahrump Hills is an outcrop of the bedrock that forms the basal layer of Mount Sharp, at the center of Mars' Gale Crater. The mission has examined the outcrop with a campaign that included a "walkabout" survey and then increasingly detailed levels of inspection. The rover climbed from the outcrop's base to higher sections three times to create vertical profiles of the rock structures and chemistry, and to select the best targets for sample-collection drilling.

The component images for this self-portrait were taken in late January, while Curiosity was at a drilling site called "Mojave 2." At that site, the mission collected its second drilled sample of Pahrump Hills for laboratory analysis. The first sample was collected in September from a site called "Confidence Hills." Since leaving the Mojave site, Curiosity has driven to another location visible in the scene, where drilling at a site called "Telegraph Peak" is planned.

Curiosity took previous self-portraits with the MAHLI camera at three sites it explored before reaching the base of Mount Sharp.

"Compared with the earlier Curiosity selfies, we added extra frames for this one so we could see the rover in the context of the full Pahrump Hills campaign," said rover team member Kathryn Stack at NASA's Jet Propulsion Laboratory, Pasadena, California. "From the Mojave site, we could include every stop we've made during the campaign."

Malin Space Science Systems, San Diego, developed, built and operates MAHLI. JPL, a division of the California Institute of Technology in Pasadena, built the rover and manages the project for NASA's Science Mission Directorate in Washington.