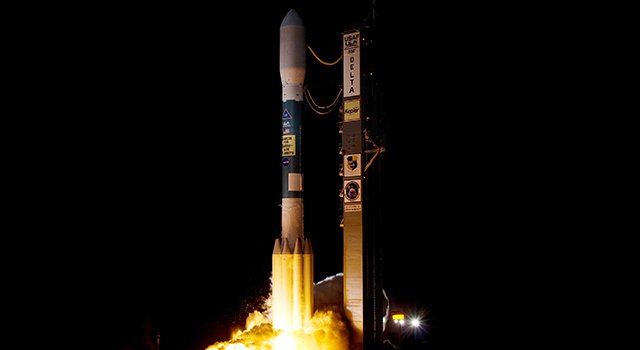 Since then, Kepler has unveiled a whole new side of our galaxy -- one that is teeming with planets. Because of Kepler, we now know that most stars have planets, Earth-sized planets are common, and planets quite unlike those in our solar system exist.

By analyzing Kepler data, scientists have identified more than 3,600 candidates believed to be planets, and verified that 961 of those candidates actually are planets, many as small as Earth. Discoveries made using Kepler now account for more than half of all the known exoplanets.

"In five years, Kepler has revolutionized our view of our place in the universe," said James Fanson, the former project manager for the mission at NASA's Jet Propulsion Laboratory in Pasadena, Calif., during development and launch. "Now we know Earth-sized planets are common across the galaxy."

Kepler's finds include planets that orbit in the habitable zone, the range of distances from a star where the surface temperature of an orbiting planet may be suitable for life-giving liquid water. One example of a habitable-zone planet found by the mission is known as Kepler-22b. At 2.4 times the size of Earth, it is thought to be too big to be rocky and support life. Scientists believe other habitable-zone planets found by the Kepler mission might be rocky, such as Kepler-62f, which is 40 percent larger in size than Earth.

A twin to Earth -- a planet with the same temperature and size as our planet -- has not yet been identified, but the analysis is far from over, as scientists continue to search the Kepler data for the tiny signature of such a planet.

Other Kepler discoveries include hundreds of star systems hosting multiple planets, and establishing a new class of planetary system where planets orbit more than one sun.

In August of last year, the mission ended its science observations after a faulty reaction wheel affected the telescope's ability to point precisely. The mission may be able to operate in a different mode and continue to do science. This next-generation mission proposal, called K2, will be considered for funding by NASA in the 2014 Astrophysics Senior Review of Operating Missions.

"Kepler really has reaped an amazing harvest of planets as well as other important and exciting results; much more than we had dared hope for," said Nick Gautier, the deputy project scientist for the mission at JPL. "Kepler has demonstrated that essentially every star has planets. This is a philosophical game changer for thinking about humanity's place in the universe."