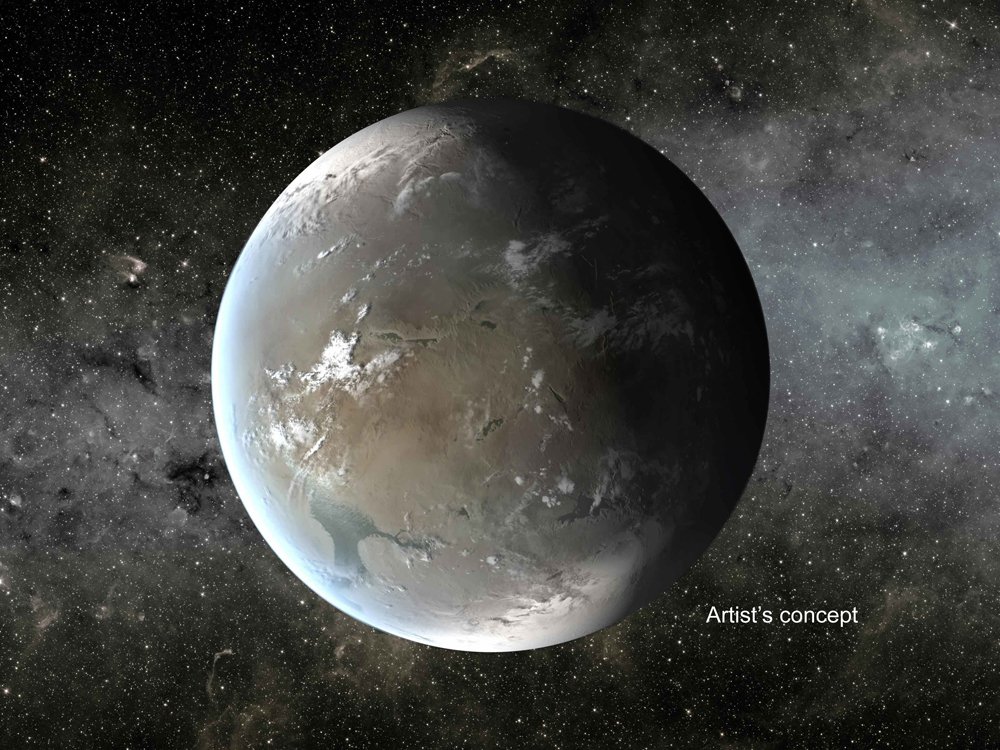 The artist's concept depicts Kepler-62f, a super-Earth-size planet in the habitable zone of a star smaller and cooler than the sun, located about 1,200 light-years from Earth in the constellation Lyra.› Full image and caption
Credit: NASA/Ames/JPL-Caltech 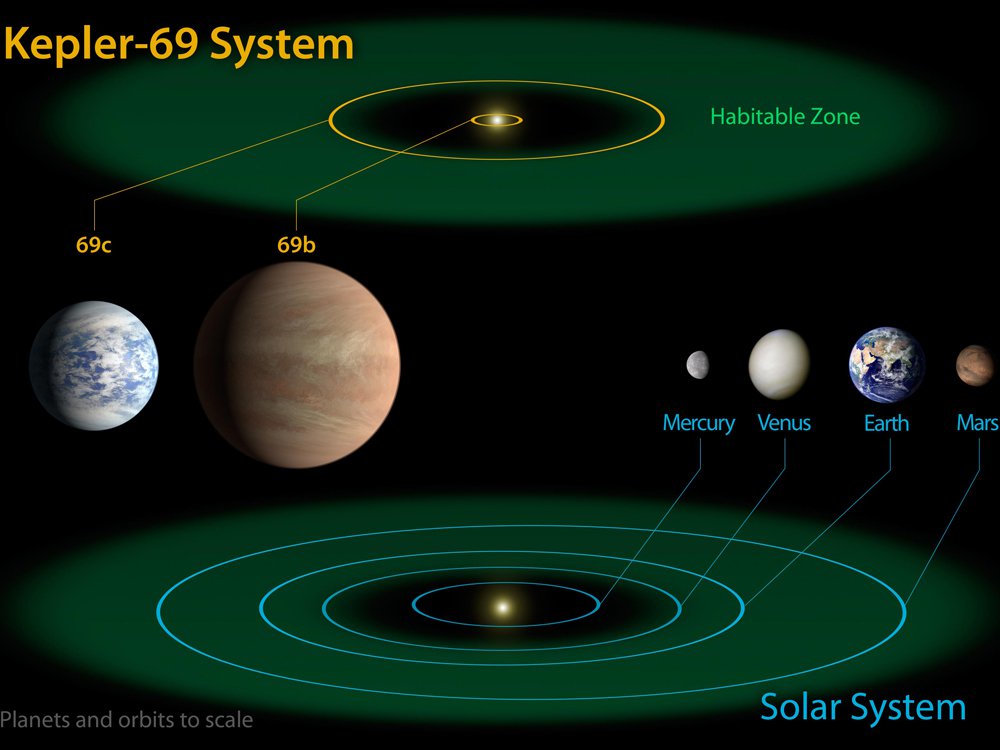 The diagram compares the planets of the inner solar system to Kepler-69, a two-planet system about 2,700 light-years from Earth in the constellation Cygnus.› Full image and caption
Credit: NASA/Ames/JPL-Caltech 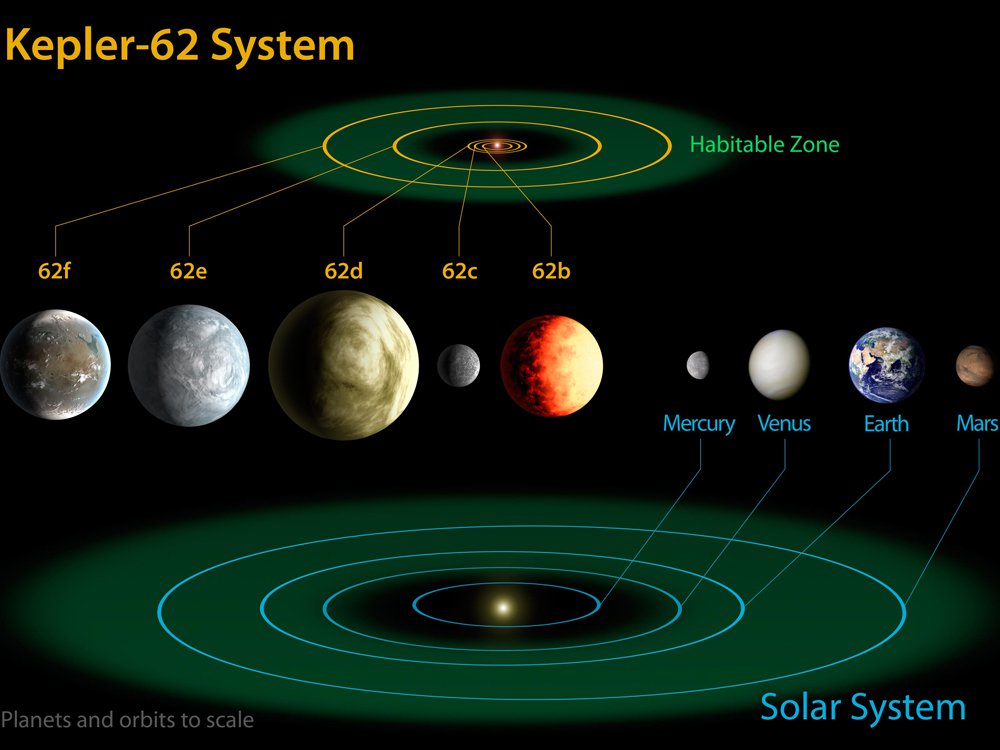 The diagram compares the planets of the inner solar system to Kepler-62, a five-planet system about 1,200 light-years from Earth in the constellation Lyra.› Full image and caption
Credit: NASA/Ames/JPL-Caltech 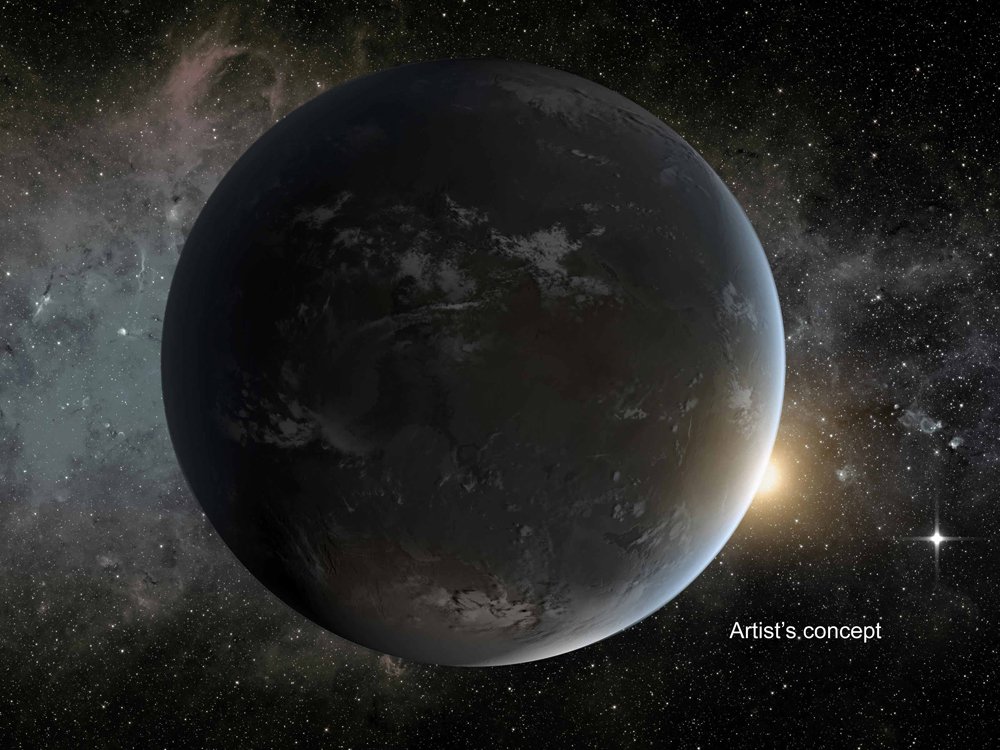 This artist's concept depicts in the foreground planet Kepler-62f, a super-Earth-size planet in the habitable zone of its star, which is seen peeking out from behind the right edge of the planet.› Full image and caption
Credit: NASA/Ames/JPL-Caltech 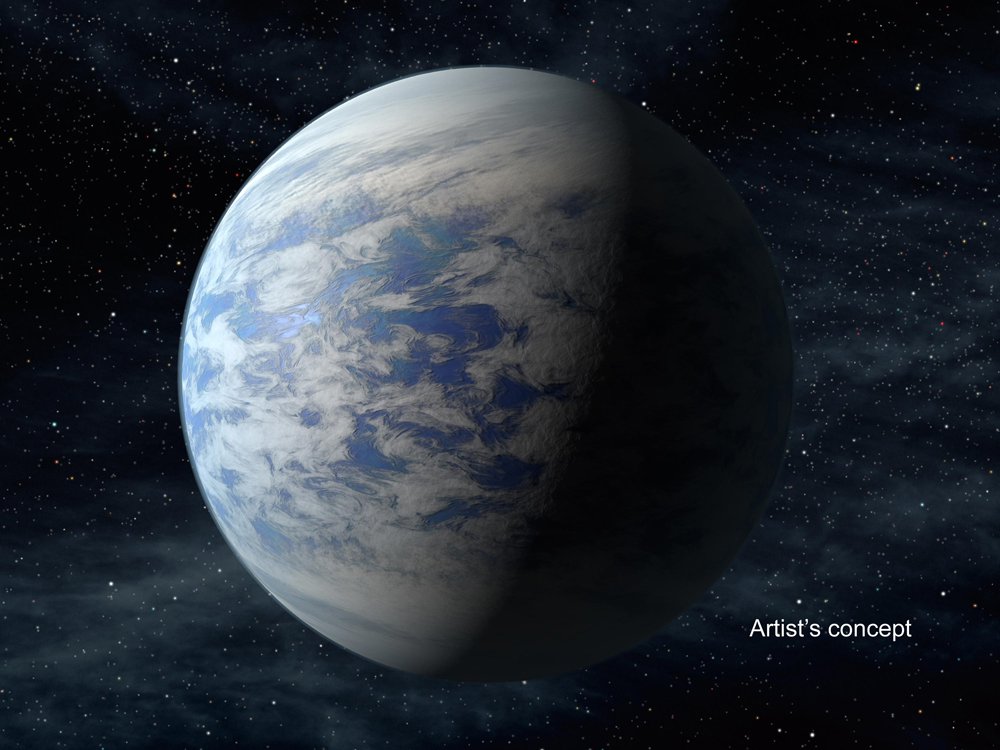 The artist's concept depicts Kepler-69c, a super-Earth-size planet in the habitable zone of a star like our sun, located about 2,700 light-years from Earth in the constellation Cygnus.› Full image and caption
Credit: NASA/Ames/JPL-Caltech 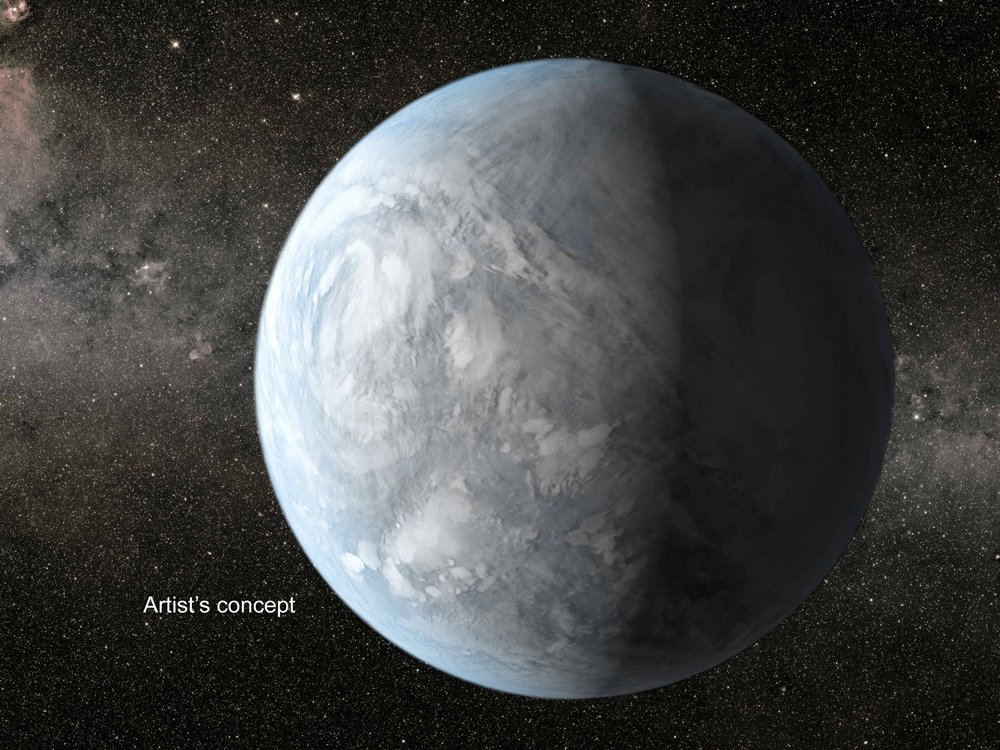 The artist's concept depicts Kepler-62e, a super-Earth-size planet in the habitable zone of a star smaller and cooler than the sun, located about 1,200 light-years from Earth in the constellation Lyra.› Full image and caption
Credit: NASA Ames/JPL-Caltech

PASADENA, Calif. -- NASA's Kepler mission has discovered two new planetary systems that include three super-Earth-size planets in the "habitable zone," the range of distance from a star where the surface temperature of an orbiting planet might be suitable for liquid water.

The third planet, Kepler-69c, is 70 percent larger than the size of Earth, and orbits in the habitable zone of a star similar to our sun. Astronomers are uncertain about the composition of Kepler-69c, but its orbit of 242 days around a sun-like star resembles that of our neighboring planet Venus.

Scientists do not know whether life could exist on the newfound planets, but their discovery signals we are another step closer to finding a world similar to Earth around a star like our sun.

"The Kepler spacecraft has certainly turned out to be a rock star of science," said John Grunsfeld, associate administrator of the Science Mission Directorate at NASA Headquarters in Washington. "The discovery of these rocky planets in the habitable zone brings us a bit closer to finding a place like home. It is only a matter of time before we know if the galaxy is home to a multitude of planets like Earth, or if we are a rarity."

The Kepler space telescope, which simultaneously and continuously measures the brightness of more than 150,000 stars, is NASA's first mission capable of detecting Earth-size planets around stars like our sun.

Orbiting its star every 122 days, Kepler-62e was the first of these habitable zone planets identified. Kepler-62f, with an orbital period of 267 days, was later found by Eric Agol, associate professor of astronomy at the University of Washington and co-author of a paper on the discoveries published in the journal Science.

The size of Kepler-62f is now measured, but its mass and composition are not. However, based on previous studies of rocky exoplanets similar in size, scientists are able to estimate its mass by association.

"The detection and confirmation of planets is an enormously collaborative effort of talent and resources, and requires expertise from across the scientific community to produce these tremendous results," said William Borucki, Kepler science principal investigator at NASA's Ames Research Center at Moffett Field, Calif., and lead author of the Kepler-62 system paper in Science. "Kepler has brought a resurgence of astronomical discoveries and we are making excellent progress toward determining if planets like ours are the exception or the rule."

The two habitable zone worlds orbiting Kepler-62 have three companions in orbits closer to their star, two larger than the size of Earth and one about the size of Mars. Kepler-62b, Kepler-62c and Kepler-62d orbit every five, 12 and 18 days, respectively, making them very hot and inhospitable for life as we know it.

The five planets of the Kepler-62 system orbit a star classified as a K2 dwarf, measuring just two-thirds the size of the sun and only one-fifth as bright. At seven billion years old, the star is somewhat older than the sun. It is about 1,200 light-years from Earth in the constellation Lyra.

A companion to Kepler-69c, known as Kepler-69b, is more than twice the size of Earth and whizzes around its star every 13 days. The Kepler-69 planets' host star belongs to the same class as our sun, called G-type. It is 93 percent the size of the sun and 80 percent as luminous and is located approximately 2,700 light-years from Earth in the constellation Cygnus.

"We only know of one star that hosts a planet with life, the sun. Finding a planet in the habitable zone around a star like our sun is a significant milestone toward finding truly Earth-like planets," said Thomas Barclay, Kepler scientist at the Bay Area Environmental Research Institute in Sonoma, Calif., and lead author of the Kepler-69 system discovery published in the Astrophysical Journal.

When a planet candidate transits, or passes in front of the star from the spacecraft's vantage point, a percentage of light from the star is blocked. The resulting dip in the brightness of the starlight reveals the transiting planet's size relative to its star. Using the transit method, Kepler has detected 2,740 candidates. Using various analysis techniques, ground telescopes and other space assets, 122 planets have been confirmed.

Early in the mission, the Kepler telescope primarily found large, gaseous giants in very close orbits of their stars. Known as "hot Jupiters," these are easier to detect due to their size and very short orbital periods. Earth would take three years to accomplish the three transits required to be accepted as a planet candidate. As Kepler continues to observe, transit signals of habitable zone planets the size of Earth that are orbiting stars like the sun will begin to emerge.