Kepler Data Suggest Earth-size Planets May Be Next Door 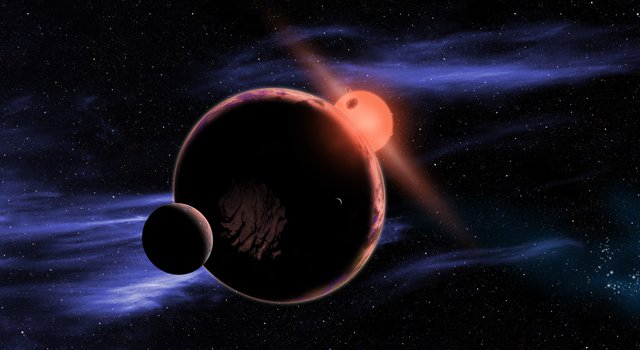 Astronomers estimate that six percent of red dwarfs have a temperate Earth-size planet, as close as 13 light-years away.› Full image and caption
Credit: D. Aguilar/Harvard-Smithsonian Center for Astrophysics

Astronomers using data from NASA's Kepler space telescope estimate that six percent of red dwarf stars in the galaxy have Earth-size planets in their habitable zones.

Using publicly available data from NASA's Kepler space telescope, astronomers at the Harvard-Smithsonian Center for Astrophysics estimate that six percent of red dwarf stars in the galaxy have Earth-size planets in the "habitable zone," the range of distances from a star where the surface temperature of an orbiting planet might be suitable for liquid water.

The majority of the sun's closest stellar neighbors are red dwarfs. Researchers now believe that an Earth-size planet with a moderate temperature may be just 13 light-years away.

"We don't know if life could exist on a planet orbiting a red dwarf, but the findings pique my curiosity and leave me wondering if the cosmic cradles of life are more diverse than we humans have imagined," said Natalie Batalha, Kepler mission scientist at NASA's Ames Research Center in Moffett Field, Calif.

The research team analyzed 95 planet candidates in the Kepler catalog orbiting 64 red dwarf stars. Most of these candidates aren't the right size or temperature to be considered Earth-like, as defined by the size relative to Earth and the distance from the host star. However, three candidates are both temperate and smaller than twice the size of Earth.

Red dwarf stars are smaller, cooler and fainter than our sun. An average red dwarf is only one-third as large and one-thousandth as bright as the sun. Consequently, the not-too-hot or not-too-cold habitable zone would be much closer to a cooler star than it is to the sun.

"This close-in habitable zone around cooler stars makes planets more vulnerable to the effects of stellar flares and gravitational interactions, complicating our understanding of their likely habitability," said Victoria Meadows, professor at the University of Washington, Seattle, and principal investigator with the NASA Astrobiology Institute. "But, if the planets predicted by this study are indeed found very nearby, then it will make it easier for us to make the challenging observations needed to learn more about them, including whether or not they can or do support life."

Kepler is the first NASA mission capable of finding Earth-size planets in or near the habitable zone. Kepler is detecting planets and possible candidates with a wide range of sizes and orbital distances to help scientists better understand our place in the galaxy.

For more information about the discovery, see the full press release .

For information about the Kepler Mission, visit: http://www.nasa.gov/kepler .