Jupiter's Io Generates Power and Noise, But No Magnetic Field 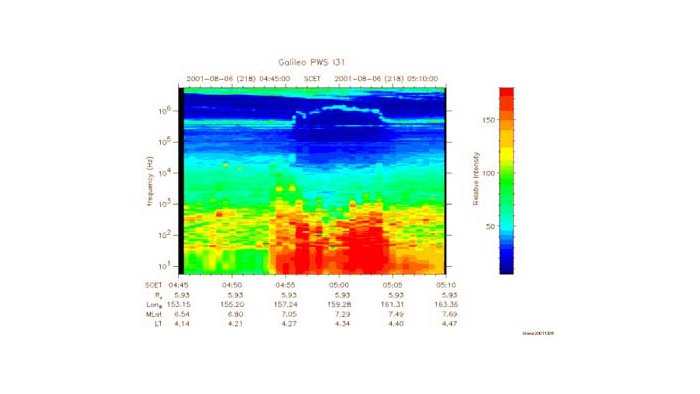 A great roar of acoustic waves near the north and south poles of Jupiter's moon Io shouts about the power of the volcanic moon.

A great roar of acoustic waves near the north and south poles of Jupiter's moon Io shouts about the power of the volcanic moon.

The wave data, new pictures and other information collected recently by NASA's Galileo spacecraft provide insight into what happens above Io's surface, at its colorful volcanoes and inside its hot belly. Scientists presented the findings Monday at a meeting of the American Geophysical Union in San Francisco.

Galileo, managed by NASA's Jet Propulsion Laboratory, Pasadena, Calif., has been orbiting Jupiter for six years. As it flew near Io's poles in August and October, the density of charged particles it was passing through suddenly increased about tenfold when the spacecraft crossed the path of a magnetic-field connection between Io and Jupiter, reported Dr. Donald Gurnett of the University of Iowa, Iowa City. The waves, indicating the density, travel in a plasma of charged particles, and would be silent to the ear, but Iowa researchers converted them to sound waves to make the patterns audible. Audio clips are available online at http://www.jpl.nasa.gov/videos/io .

"You hear a whistling sound from Jupiter's radio emissions, then, just when you go over the pole, you hear a tremendous roar that starts abruptly, then stops abruptly," Gurnett said. "It's like the noise from a huge electrical power generator." Io actually generates as much wattage as about 1,000 nuclear power plants.

The region of increased density is where electrons and ions come up from Io's tenuous atmosphere and follow a "flux tube" where field lines from Jupiter's strong magnetic field intersect Io. In a 1999 flyby of Io, Galileo had provided some indication of the higher density over the moon's poles. This year's two Io flybys were the first to show that those denser areas coincide with the magnetic-field flux tube, Gurnett said.

Recent magnetic-field measurements tell us something new about the plumes erupting from Io's volcanoes and about the moon's molten core, said Dr. Margaret Kivelson of the University of California, Los Angeles.

"If this is the mechanism that's producing the currents, it may help us in the search for active plumes," she said.

Galileo's routes near Io's north pole in August and near its south pole in October were chosen for gaining measurements to determine whether Io generates an intrinsic magnetic field of its own within the greater magnetic field generated by Jupiter.

"There's no intrinsic field," Kivelson said. "We can put that question to rest." That means Io's molten iron core does not have the same type of convective overturning by which Earth's molten core generates Earth's magnetic field. Lack of that overturning fits a model of Io's core being heated from the outside, by tidal flexing of the layers around it, rather than being heated from the center.

The heat generated inside Io by the tidal tug of Jupiter makes this moon the most volcanically active world in the solar system. A new color picture of one large volcanic crater, Tupan Patera, shows various red, green, yellow and black surface materials laid down by volcanic interactions of molten rock and sulfur compounds, said Dr. Elizabeth Turtle of the University of Arizona, Tucson. Tupan, named for a Brazilian god of thunder, is one of Io's most persistent volcanoes. Another new image reveals roofed-over portions of a long lava channel, indicating that insulation provided by the cover helped lengthen a large lava flow.

New images of Io are available from JPL at http://www.jpl.nasa.gov/images/io and from the University of Arizona Planetary Image Research Laboratory at http://pirlwww.lpl.arizona.edu/missions/Galileo/releases/ .

NASA's Jet Propulsion Laboratory, a division of the California Institute of Technology in Pasadena, manages Galileo for NASA's Office of Space Science, Washington, D.C. Additional information about the mission is available online at: http://galileo.jpl.nasa.gov .