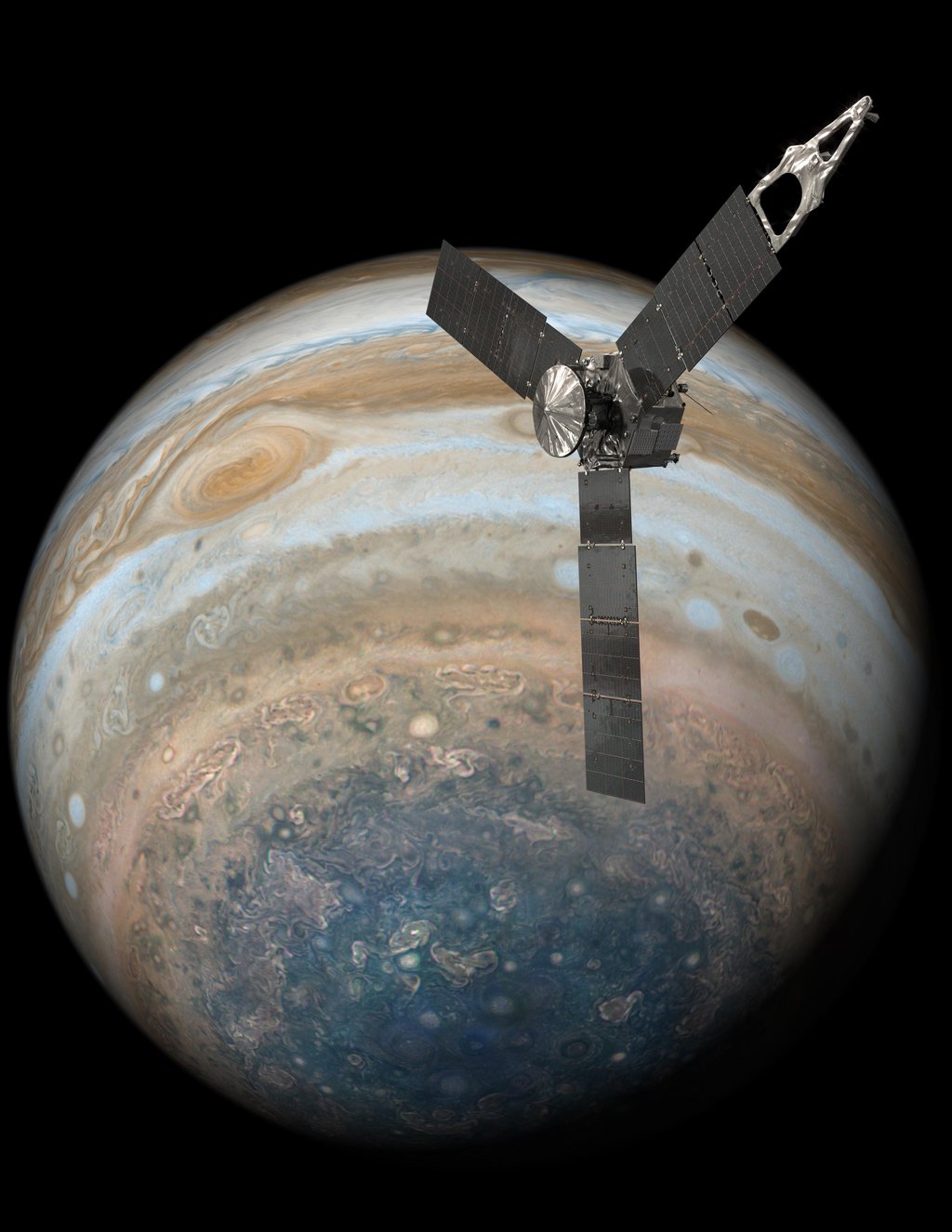 UPDATED Jan. 19, 2023: Data received from Juno indicates the first four of 90 images taken by the spacecraft’s JunoCam outreach camera during its most recent flyby of Jupiter (Perijove 47) were degraded: two were unusable and two had a high level of image noise. The JunoCam team believes the loss of these images is due to an anomalous temperature rise that occurred when the camera power was turned on in preparation for the flyby. Subsequent images – captured after the instrument returned to normal temperatures – were not degraded. The team plans to leave the instrument turned on after the next flyby, Perijove 48, rather than powering it off and then on again before Perijove 49.

JunoCam is a color, visible-light camera designed to capture pictures of Jupiter’s cloud tops. It was included on the spacecraft specifically for purposes of public engagement; although its images have been helpful to the science team, it is not considered one of the mission’s science instruments. The camera was originally designed to operate in Jupiter’s high-energy particle environment for at least seven orbits but has survived far longer. The spacecraft will make its 48th pass of the planet on Jan. 22.

UPDATED Jan. 10, 2023: Juno returned to nominal operations Dec. 29, 2022, after going into safe mode on Dec. 17 in response to the onboard computer memory anomaly that occurred during its Dec. 14 close pass of Jupiter. As expected, the majority of the science data collected during the flyby (including all data related to Jupiter’s moon Io) was successfully received and only a small portion was corrupted by the anomaly. Instrument recovery activities are now complete, and the spacecraft is functioning nominally. Juno’s next flyby of Jupiter will occur on Sunday, Jan. 22.

The science data from the solar-powered spacecraft’s most recent flyby of Jupiter and its moon Io appears to be intact.

NASA’s Juno spacecraft completed its 47th close pass of Jupiter on Dec. 14. Afterward, as the solar-powered orbiter was sending its science data to mission controllers from its onboard computer, the downlink was disrupted.

The issue – an inability to directly access the spacecraft memory storing the science data collected during the flyby – was most likely caused by a radiation spike as Juno flew through a radiation-intensive portion of Jupiter’s magnetosphere. Mission controllers at NASA’s Jet Propulsion Laboratory and its mission partners successfully rebooted the computer and, on Dec. 17, put the spacecraft into safe mode, a precautionary status in which only essential systems operate.

As of Dec. 22, steps to recover the flyby data yielded positive results, and the team is now downlinking the science data. There is no indication that the science data through the time of closest approach to Jupiter, or from the spacecraft’s flyby of Jupiter’s moon Io, was adversely affected. The remainder of the science data collected during the flyby is expected to be sent down to Earth over the next week, and the health of the data will be verified at that time. The spacecraft is expected to exit safe mode in about a week’s time. Juno’s next flyby of Jupiter will be on Jan. 22, 2023.

NASA’s Jet Propulsion Laboratory, a division of Caltech in Pasadena, California, manages the Juno mission for the principal investigator, Scott J. Bolton, of the Southwest Research Institute in San Antonio. Juno is part of NASA’s New Frontiers Program, which is managed at NASA’s Marshall Space Flight Center in Huntsville, Alabama, for the agency’s Science Mission Directorate in Washington. Lockheed Martin Space in Denver built and operates the spacecraft.