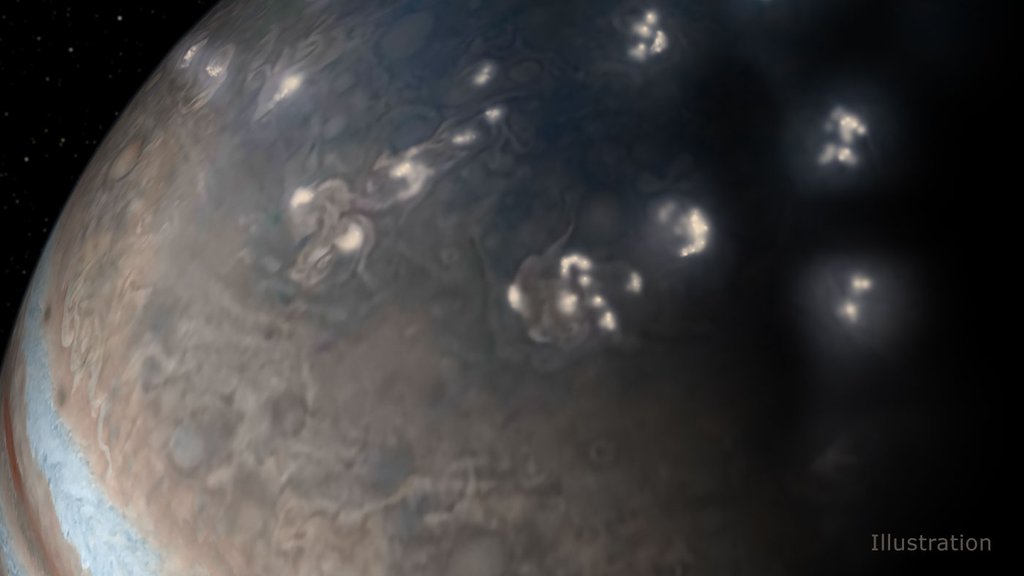 This artist's concept of lightning distribution in Jupiter's northern hemisphere incorporates a JunoCam image with artistic embellishments. Data from NASA's Juno mission indicates that most of the lightning activity on Jupiter is near its poles.› Full image and caption
Credit: NASA/JPL-Caltech/SwRI/JunoCam

NASA's Juno spacecraft finds lightning on Jupiter is same as in Earth in some ways, opposite in others.

Ever since NASA's Voyager 1 spacecraft flew past Jupiter in March, 1979, scientists have wondered about the origin of Jupiter's lightning. That encounter confirmed the existence of Jovian lightning, which had been theorized for centuries. But when the venerable explorer hurtled by, the data showed that the lightning-associated radio signals didn't match the details of the radio signals produced by lightning here at Earth.

In a new paper published in Nature today, scientists from NASA's Juno mission describe the ways in which lightning on Jupiter is actually analogous to Earth's lightning. Although, in some ways, the two types of lightning are polar opposites.

"No matter what planet you're on, lightning bolts act like radio transmitters -- sending out radio waves when they flash across a sky," said Shannon Brown of NASA's Jet Propulsion Laboratory in Pasadena, California, a Juno scientist and lead author of the paper. "But until Juno, all the lightning signals recorded by spacecraft [Voyagers 1 and 2, Galileo, Cassini] were limited to either visual detections or from the kilohertz range of the radio spectrum, despite a search for signals in the megahertz range. Many theories were offered up to explain it, but no one theory could ever get traction as the answer."

Enter Juno, which has been orbiting Jupiter since July 4, 2016. Among its suite of highly sensitive instruments is the Microwave Radiometer Instrument (MWR), which records emissions from the gas giant across a wide spectrum of frequencies.

"In the data from our first eight flybys, Juno's MWR detected 377 lightning discharges," said Brown. "They were recorded in the megahertz as well as gigahertz range, which is what you can find with terrestrial lightning emissions. We think the reason we are the only ones who can see it is because Juno is flying closer to the lighting than ever before, and we are searching at a radio frequency that passes easily through Jupiter's ionosphere."

While the revelation showed how Jupiter lightning is similar to Earth's, the new paper also notes that where these lightning bolts flash on each planet is actually quite different.

"Jupiter lightning distribution is inside out relative to Earth," said Brown. "There is a lot of activity near Jupiter's poles but none near the equator. You can ask anybody who lives in the tropics -- this doesn't hold true for our planet."

Why do lightning bolts congregate near the equator on Earth and near the poles on Jupiter? Follow the heat.

Earth's derives the vast majority of its heat externally from solar radiation, courtesy of our Sun. Because our equator bears the brunt of this sunshine, warm moist air rises (through convection) more freely there, which fuels towering thunderstorms that produce lightning.

Jupiter's orbit is five times farther from the Sun than Earth's orbit, which means that the giant planet receives 25 times less sunlight than Earth. But even though Jupiter's atmosphere derives the majority of its heat from within the planet itself, this doesn't render the Sun's rays irrelevant. They do provide some warmth, heating up Jupiter's equator more than the poles -- just as they heat up Earth. Scientists believe that this heating at Jupiter's equator is just enough to create stability in the upper atmosphere, inhibiting the rise of warm air from within. The poles, which do not have this upper-level warmth and therefore no atmospheric stability, allow warm gases from Jupiter's interior to rise, driving convection and therefore creating the ingredients for lightning.

"These findings could help to improve our understanding of the composition, circulation and energy flows on Jupiter," said Brown. But another question looms. "Even though we see lightning near both poles, why is it mostly recorded at Jupiter's north pole?"

In a second Juno lightning paper published today in Nature Astronomy, Ivana Kolmašová of the Czech Academy of Sciences, Prague, and colleagues, present the largest database of lightning-generated low-frequency radio emissions around Jupiter (whistlers) to date. The data set of more than 1,600 signals, collected by Juno's Waves instrument, is almost 10 times the number recorded by Voyager 1. Juno detected peak rates of four lightning strikes per second (similar to the rates observed in thunderstorms on Earth) which is six times higher than the peak values detected by Voyager 1.

"These discoveries could only happen with Juno," said Scott Bolton, principal investigator of Juno from the Southwest Research Institute, San Antonio. "Our unique orbit allows our spacecraft to fly closer to Jupiter than any other spacecraft in history, so the signal strength of what the planet is radiating out is a thousand times stronger. Also, our microwave and plasma wave instruments are state-of-the-art, allowing us to pick out even weak lightning signals from the cacophony of radio emissions from Jupiter. "

More information on Juno can be found at:

More information about Jupiter can be found at: