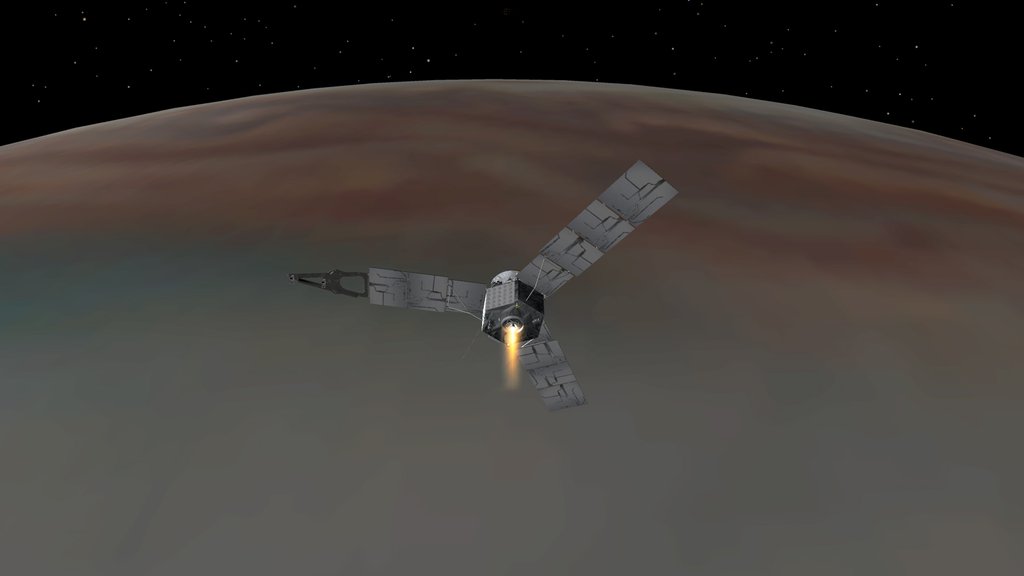 NASA's Juno mission, launched nearly five years ago, will soon reach its final destination: the most massive planet in our solar system, Jupiter. On the evening of July 4, at roughly 9 p.m. PDT (12 a.m. EDT, July 5), the spacecraft will complete a burn of its main engine, placing it in orbit around the king of planets.

At 7:41 p.m. PDT (10:41 p.m. EDT), Juno switches to its low-gain antenna. Fine-tune adjustments are then made to the spacecraft's attitude. Twenty-two minutes before the main engine burn, at 7:56 p.m. PDT (10:56 p.m. EDT), the spacecraft spins up from 2 to 5 revolutions per minute (RPM) to help stabilize it for the orbit insertion burn.

At 8:18 p.m. PDT (11:18 p.m. EDT), Juno's 35-minute main-engine burn will begin. This will slow it enough to be captured by the giant planet's gravity. The burn will impart a mean change in velocity of 1,212 mph (542 meters a second) on the spacecraft. It is performed in view of Earth, allowing its progress to be monitored by the mission teams at NASA's Jet Propulsion Laboratory in Pasadena, California, and Lockheed Martin Space Systems in Denver, via signal reception by Deep Space Network antennas in Goldstone, California, and Canberra, Australia.

After the main engine burn, Juno will be in orbit around Jupiter. The spacecraft will spin down from 5 to 2 RPM, turn back toward the sun, and ultimately transmit telemetry via its high-gain antenna.

Juno starts its tour of Jupiter in a 53.5-day orbit. The spacecraft saves fuel by executing a burn that places it in a capture orbit with a 53.5-day orbit instead of going directly for the 14-day orbit that will occur during the mission's primary science collection period. The 14-day science orbit phase will begin after the final burn of the mission for Juno's main engine on October 19.

Learn more about the June mission, and get an up-to-date schedule of events, at: