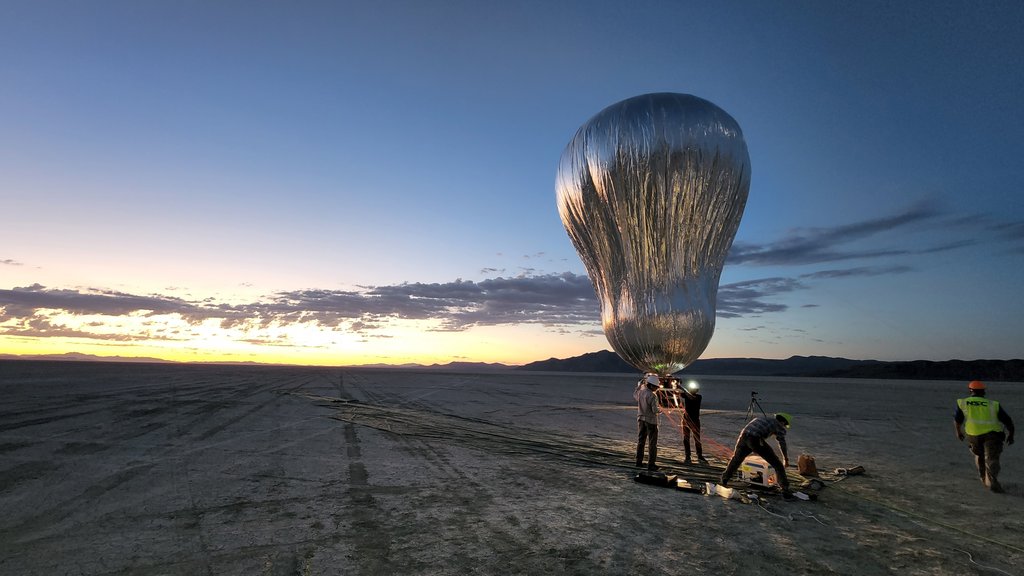 A prototype aerial robotic balloon, or aerobot, is readied for a sunrise test flight at Black Rock Desert, Nevada, in July 2022, by team members from JPL and Near Space Corporation. The aerobot successfully completed two flights, demonstrating controlled altitude flight.

A scaled-down version of the aerobot that could one day take to the Venusian skies successfully completed two Nevada test flights, marking a milestone for the project.

The intense pressure, heat, and corrosive gases of Venus’ surface are enough to disable even the most robust spacecraft in a matter of hours. But a few dozen miles overhead, the thick atmosphere is far more hospitable to robotic exploration.

One concept envisions pairing a balloon with a Venus orbiter, the two working in tandem to study Earth’s sister planet. While the orbiter would remain far above the atmosphere, taking science measurements and serving as a communication relay, an aerial robotic balloon, or aerobot, about 40 feet (12 meters) in diameter would travel into it.

To test this concept, a team of scientists and engineers from NASA’s Jet Propulsion Laboratory in Southern California and the Near Space Corporation in Tillamook, Oregon, recently carried out two successful flights of a prototype balloon that’s about a third of that size. 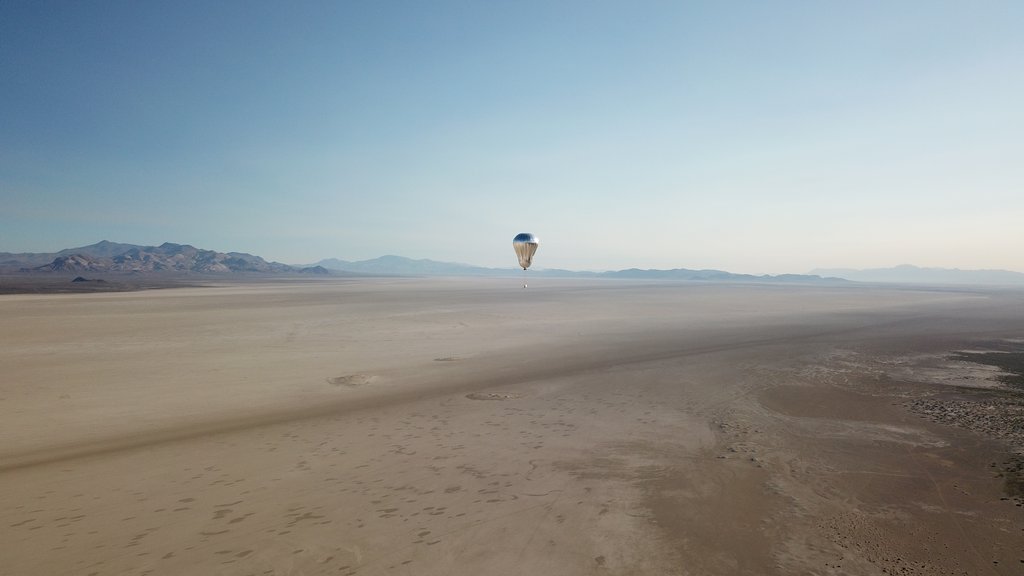 The one-third scale prototype aerobot is designed to withstand the corrosive chemicals in Venus’ atmosphere. During the flights, the balloon’s materials were tested for the first time, giving the team confidence that a larger aerobot design could operate in Venus skies.

The shimmering silver balloon ascended more than 4,000 feet (1 kilometer) over Nevada’s Black Rock Desert to a region of Earth’s atmosphere that approximates the temperature and density the aerobot would experience about 180,000 feet (55 kilometers) above Venus. Coordinated by Near Space, these tests represent a milestone in proving the concept’s suitability for accessing a region of Venus’ atmosphere too low for orbiters to reach, but where a balloon mission could operate for weeks or even months.

“We’re extremely happy with the performance of the prototype. It was launched, demonstrated controlled-altitude maneuvers, and was recovered in good condition after both flights,” said robotics technologist Jacob Izraelevitz, who leads the balloon development as the JPL principal investigator of the flight tests. “We’ve recorded a mountain of data from these flights and are looking forward to using it to improve our simulation models before exploring our sister planet.”

The Venus aerobot prototype is a “balloon within a balloon,” with a rigid inner reservoir that can control the quantity of helium venting to and from the flexible outer balloon. Flying above the Black Rock Desert, the aerobot used this function for the first time to control its altitude.

The only balloon-borne exploration of Venus’ atmosphere to date was a part of the twin Soviet Vega 1 and 2 missions that arrived at the planet in 1985. The two balloons (which were about 11.5 feet, or 3.6 meters, in diameter when filled with helium) lasted a little over 46 hours before their instruments’ batteries ran out. Their short time in the Venusian atmosphere provided a tantalizing hint of the science that could be achieved by a larger, longer-duration balloon platform floating within the planet’s atmosphere.

The ultimate goal of the aerobot would be to travel on the Venusian winds, floating from east to west, circumnavigating the planet for at least 100 days. The aerobot would serve as a platform for a range of science investigations, from monitoring the atmosphere for acoustic waves generated by venusquakes to analyzing the chemical composition of the clouds. The accompanying orbiter would receive data from the aerobot and relay it to Earth while providing a global view of the planet. 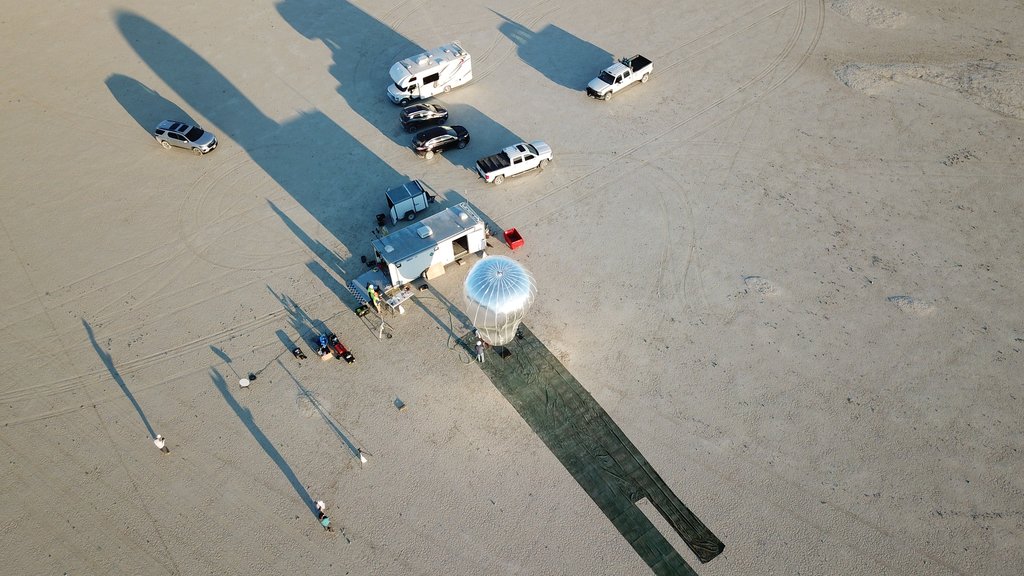 The Venus aerobot team readies the inflated aerobot for the launch of its first flight over Black Rock Desert, Nevada, in July 2022, in this view from a drone overhead.

Much like a Mars rover is commanded to drive to an interesting rock or other feature, the aerobot can be directed to raise and lower its altitude – something the Vega balloons couldn’t do – to conduct science between about 171,000 and 203,000 feet (52 and 62 kilometers) within Venus’ atmosphere.

The prototype balloon was fabricated using Near Space’s techniques for performance aerospace inflatables. Designed as a “balloon within a balloon,” it has a rigid inner reservoir filled with helium under high pressure and an encapsulating outer helium balloon that can expand and contract. To increase altitude, helium vents from the inner reservoir into the outer balloon, which expands to give the aerobot additional buoyancy. When it’s time to reduce altitude, helium is pumped back into the reservoir, causing the outer balloon to shrink and decrease the aerobot’s buoyancy.

“The success of these test flights is a huge deal for us: We’ve successfully demonstrated the technology we’ll need for investigating the clouds of Venus,” said Paul Byrne, an associate professor at Washington University in St. Louis and aerobot science collaborator. “These tests form the foundation for how we can achieve long-term robotic exploration high above Venus’ hellish surface.”

No Picnic in the Clouds

While this region of Venus’ atmosphere is more forgiving than its lower reaches, long-duration flights in the rocky planet’s clouds, which contain sulfuric acid and other corrosive chemicals, would be no picnic. So the multilayered material developed for the aerobot’s outer balloon includes an acid-proof coating, a metallization layer to reduce solar heating, and a structural inner layer that keeps it strong enough to carry the science instruments below. New techniques have also been developed to ensure a long-duration acid-proof seal with minimal helium leakage from the seams.

“The materials being used for Venus survivability are challenging to fabricate with, and the robustness of handling we’ve demonstrated in the Nevada launch and recovery gives us confidence for balloon’s reliability on Venus,” said co-investigator Tim Lachenmeier, chief executive officer of Near Space.

While the recent Nevada tests were a milestone for a future concept designed with Venus in mind, the researchers say the technology could also be used by high-altitude science balloons that need to control their altitude in Earth’s skies.