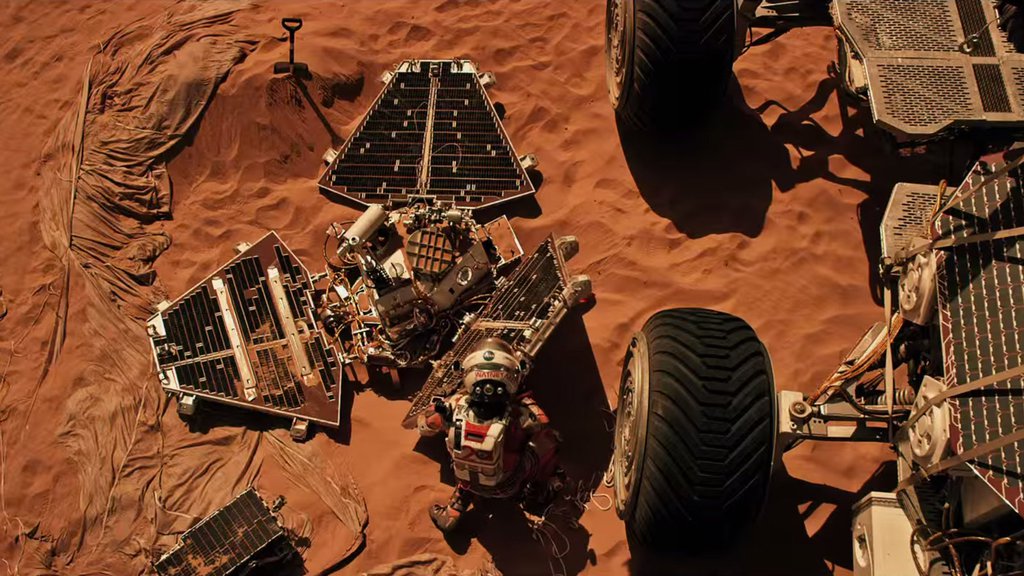 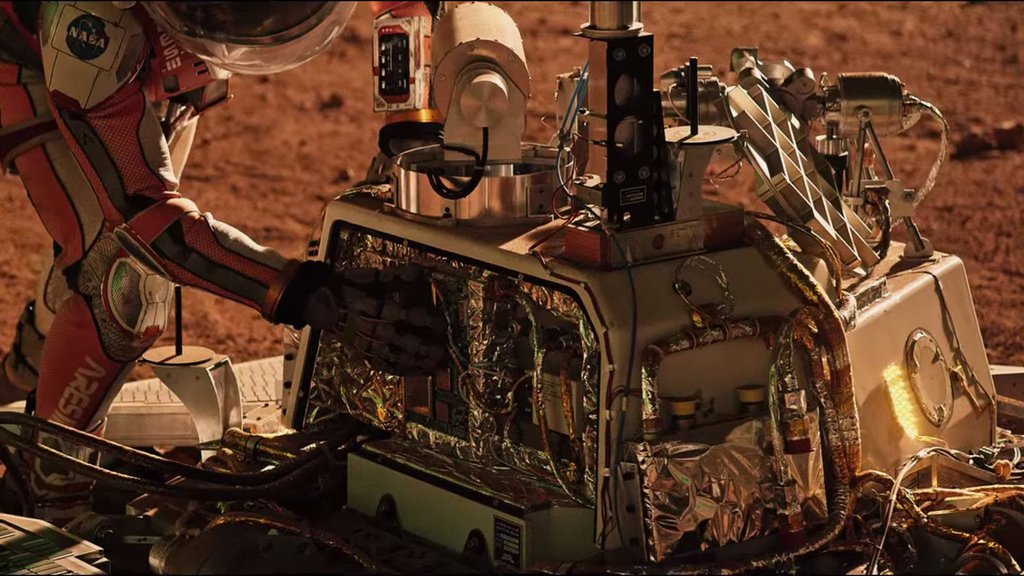 Producers of "The Martian" turned to JPL for inspiration in bringing the story to life on screen.
Credit: 20th Century Fox

NASA's Jet Propulsion Laboratory plays an important role in the novel and film "The Martian."

When fictional astronaut Mark Watney becomes stranded alone on the Red Planet in the novel and film "The Martian," people and technology from NASA's Jet Propulsion Laboratory in Pasadena, California, play important roles in his castaway adventure. Acclaimed for its attention to scientific and technical detail, "The Martian" is steeped in decades of real-life Mars exploration that JPL has led for NASA.

For more details about how NASA is focused on our journey to Mars, visit:

(There are mild spoilers in the next section -- if you haven't read or seen "The Martian," you might want to skip to the following section.)

Perhaps most crucial to the story of "The Martian," JPL designed, built and operated the Mars Pathfinder lander and its Sojourner rover, which landed on Mars in 1997 and operated for about three months. The hardy Pathfinder probe figures prominently into Watney's ability to communicate with Earth and survive his long ordeal. One of the technical details "The Martian" gets right is that, just as in the story, the real Pathfinder had a reprogrammable computer that an astronaut could, in principle, plug into and control.

The story also captures the famous can-do attitude of JPL engineers, who dive headlong into the challenge of helping communicate with the stranded astronaut and later, launching supplies to help keep him alive. And JPL's celebrated ingenuity is on display in the navigator who comes up with the solution for how to bring the entire Ares crew home. Since the beginning of the Space Age, JPL has been the world leader in deep space navigation -- from being first to conduct gravity assists around other planets to today's daredevil flybys of Saturn and its moons by Cassini.

Fictional JPL director Bruce Ng is a major supporting character in the story, and like the real JPL directors past and present, comes from a technical background. (The current real-life JPL director tends to dress a bit more formally, but has been known to sport a Hawaiian shirt from time to time.) However, while the heads of NASA, JPL and the agency's Mars program are portrayed in the story as working through tough challenges on their own, their real-life counterparts rely on teams of scientists and engineers to help provide innovative solutions.

Watney finds a creative solution to stay warm on frigid Mars using a power system called an RTG -- a radioisotope thermoelectric generator -- a "space battery" that converts heat from the natural radioactive decay of plutonium-238 into reliable electrical power. NASA's Curiosity Mars rover uses just such a power system on Mars today. JPL has for decades led the advancement of materials used to make thermocouples -- the essential components of an RTG that convert heat into electricity. And JPL is working in partnership with the U.S. Department of Energy to develop new materials that could make the next generation of RTGs 25 percent more efficient than the generator currently being used by the Curiosity.

In creating the film version of "The Martian," producers turned to JPL for technical drawings and photos of Pathfinder, in order to accurately portray the historic spacecraft in the movie. The production team also visited JPL for research that would help them create a future version of the laboratory on film, down to the well-known informality of its culture. And cast member Jessica Chastain, who played Mars mission commander Melissa Lewis, visited JPL as part of preparation for her role.

Paving the Way for the Real Martians

JPL is NASA's leading center for robotic exploration of the solar system, and has provided a variety of orbiters, landers and rovers to help reveal the true nature of Mars. Similar to its efforts prior to the Apollo landings on the moon, NASA has been sending robotic spacecraft to Mars, in part, to better characterize the environment human astronauts might face when visiting the Red Planet. Thus, as NASA studies Mars to understand its potential habitability for simple forms of life -- now and in the ancient past -- its fleet of Mars missions is also paving the way for human journeys.

Some of these robotic missions have found signs of water in the Martian subsurface that potentially could be exploited by astronauts for life support and growing plants for food, as well as making rocket fuel. NASA's Curiosity rover has a detector, called RAD, which was designed to observe the radiation environment on the cruise to Mars and after the rover landed. These data are vital to understanding how astronauts need to be protected when they make the journey to Mars. And NASA's Mars Reconnaissance Orbiter, with its powerful imaging camera, has mapped the planet at high resolution, allowing us to see Mars on a human scale as we plan for trips by astronauts.

Looking forward, JPL is developing the technological capabilities to land payloads on the Martian surface larger than the one-ton Curiosity rover. These technologies include the Low-Density Supersonic Decelerator (LDSD) project, which is testing a mammoth parachute and a giant inflatable decelerator. LDSD is an important step toward landing payloads to support human missions, which will need a variety of massive provisions, including habitats packed with food and water, pressurized rovers, and rockets for returning to orbit from the Martian surface.

JPL is also advancing precision landing technologies needed to place an autonomous Mars Ascent Vehicle, as featured in "The Martian," in a desired location, years before the arrival of a human crew. The self-controlled landing of the Curiosity rover in 2012 was a major milestone on the path to this capability.

And in addition to spacecraft missions to Mars, JPL manages NASA's Deep Space Network -- the vital communications link with spacecraft across the solar system, including those on Mars. The Network would also be used to keep in touch with future astronauts on deep-space voyages between Earth and Mars.

Early in the film version of "The Martian," as he works out how to survive on Mars, Watney mentions the founders of JPL, noting that they were daring students from the California Institute of Technology in Pasadena. Caltech still staffs and manages JPL for NASA. In recent years, the laboratory has adopted a quote from President Teddy Roosevelt -- "Dare Mighty Things" -- as its unofficial motto. That boldness lives on as JPL helps support NASA's real-life journey to Mars.

JPL manages NASA's Mars program, along with the agency's Mars Science Laboratory and its Curiosity rover, the Mars Reconnaissance Orbiter and the LDSD project.