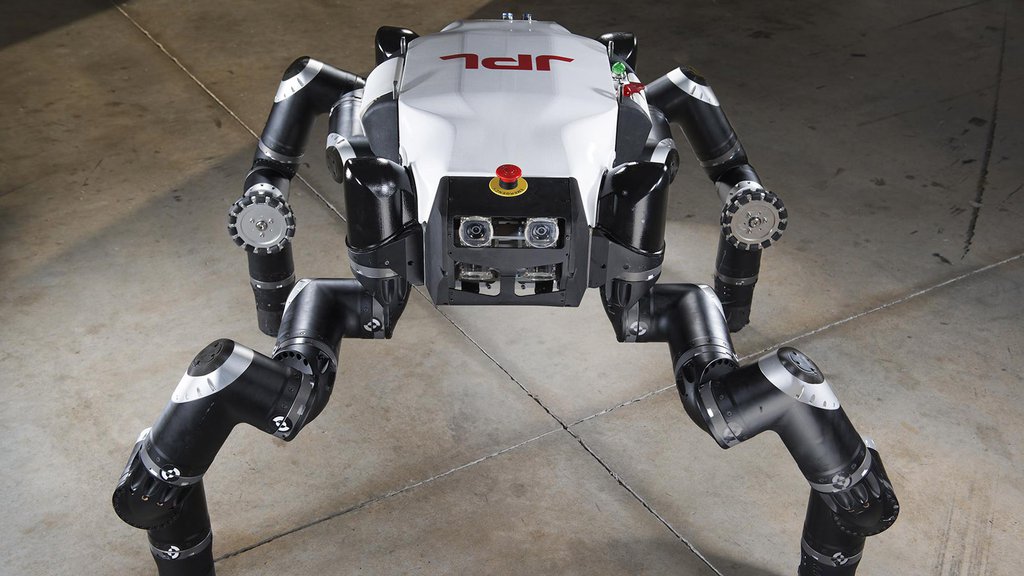 Limbed robot RoboSimian, which was developed at JPL, will compete in the DARPA Robotics Challenge, June 5 and 6.› Full image and caption
Credit: JPL-Caltech

During the two-day competition, which is open to the public and free for spectators, robots will compete simultaneously across four different courses during hour-long runs. In addition to participating in the tournament, JPL will have a booth at an on-site robotics exposition, joining about 70 groups showcasing technologies relating to disaster response, robotics and unmanned systems.

With seven sets of stereo cameras for seeing and four limbs for maneuvering and manipulation, RoboSimian has been designed to traverse complicated terrain and perform dexterous tasks. The robot also features a LiDAR (Light Detection and Ranging) device for mapping its environment in 3-D. RoboSimian and its competitors will be faced with such tasks as driving a vehicle and getting out of it, opening a door, cutting a hole in a wall, opening a valve and crossing a field of debris.

The DRC Finals are the culmination of a three-year program to develop robots capable of assisting humans in responding to natural and man-made disasters. It was launched following the 2011 earthquake and tsunami that devastated the Tohoku region of Japan, with the goal of better preparing humans to confront the threats posed by future disasters. Through two preliminary rounds of competition, DARPA and the DRC teams have redefined what is possible in supervised autonomy, physical adaptability and human-machine control interfaces. Teams will vie for a first prize of $2 million.

Track the latest information about the challenge on Twitter with the hashtag #DARPADRC.