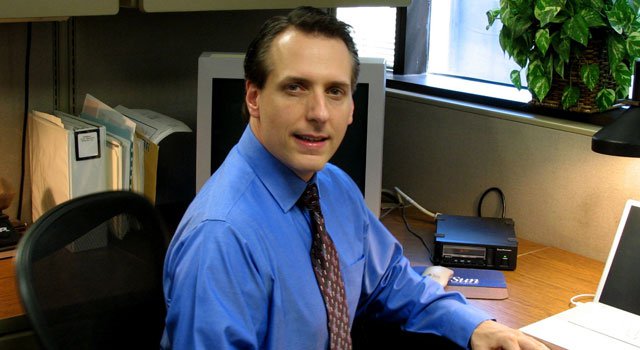 Jon Giorgini, an engineer at JPL, has received the prestigious Harold Masursky Award, presented by the American Astronomical Society's Division for Planetary Sciences.

The Masursky Award recognizes individuals for outstanding service to planetary science and exploration through engineering, managerial, programmatic or public service activities. Giorgini runs JPL's Horizons system, an online database that can generate locations and orbits for the almost half-million known celestial bodies in our solar system.

The award citation states in part: A specialist at the NASA Jet Propulsion Laboratory, Jon developed and implemented the on-line Horizons system that is used by the international scientific community to generate accurate ephemeris information for the 450,000 currently known objects in the solar system. This includes the sun, planets, their moons, asteroids, comets, and many spacecraft... This system is used by observers, researchers, and mission planners to plan observations and track the targets of space and ground-based telescopes, as well as spacecraft. Since its inception in October 1996, the Horizons system has responded to more than ten million requests (on average, more than 2200 per day) received from 300,000 unique locations.

Giorgini, a senior engineer in JPL's Solar System Dynamics Group, was a navigator for the Magellan spacecraft during its mapping of Venus (1991-1993), developing and implementing the new navigation methodology for the first interplanetary aerobrake. He created JPL's "On-Site Orbit Determination" system -- software used at the Goldstone and Arecibo planetary radar sites to track and update the orbits of radar targets. He then returned to navigation for the Mars Global Surveyor aerobrake planning and interplanetary phases (1995-1997), followed by the Near-Earth Asteroid Rendezvous mission navigation and radio science teams (1997-2001). As a member of the asteroid radar observing team (1994-present), he is responsible for orbit analysis and predictions used to operate radar tracking systems at Goldstone and Arecibo. He has worked on more than 290 asteroid radar targets since 1994 and is co-discoverer of 27 asteroid satellites. He discovered the potential Earth impact hazard posed by the asteroid 1950 DA, and developed methods to assess dynamics and impact potential over centuries. Giorgini is author or co-author of 99 research papers and four book chapters.

Giorgini's outside activities have included climbs of Mount Kilimanjaro and Vinson Massif, the highest mountains in Africa and Antarctica. He has practiced martial arts and kickboxing for the last 22 years.