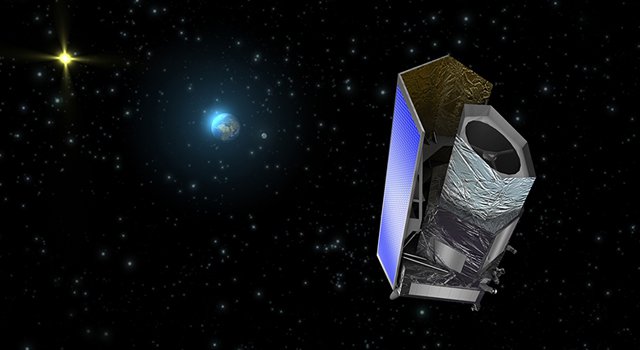 This artist's concept shows the Euclid spacecraft. The telescope will launch to an orbit around the sun-Earth Lagrange point L2. The Lagrange point is a location where the gravitational pull of two large masses, the sun and Earth in this case, precisely equals the force required for a small object, such as the Euclid spacecraft, to maintain a relatively stationary position behind Earth as seen from the sun.› Full image and caption
Credit: ESA/C. Carreau

The European Space Agency has selected three NASA-nominated science teams to participate in their planned Euclid mission, including one led by NASA's Jet Propulsion Laboratory.

NASA is a partner in the Euclid mission, a space telescope designed to probe the mysteries of dark energy and dark matter. Euclid is currently scheduled to launch in 2020.

JPL will provide 16 advanced infrared detectors and four spare detectors for one of two instruments planned for the mission. In addition, JPL will contribute to science planning and data analysis with the help of its 43-member science team, the largest of the three U.S. teams. This team, led by JPL scientist Jason Rhodes, is composed of 29 scientists recently nominated by NASA, and 14 U.S. scientists who are already part of Euclid.

The other two U.S. science teams are led by Ranga-Ram Chary of the Infrared Processing and Analysis Center at the California Institute of Technology, Pasadena; and Alexander Kashlinsky of NASA's Goddard Space Flight Center, Greenbelt, Md.; with three and seven members, respectively.

Rhodes also was appointed by NASA to be a member of ESA's principal 12-member Euclid Science Team and the U.S. representative for the Euclid Consortium's governing body. The Euclid Consortium is an international body of 1,000 members, including the U.S. science team members, and will build the instruments and analyze the science data jointly.

"Understanding the hidden contents of the universe and the nature of the dark energy will require the collaboration of astronomers and engineers around the world," said Rhodes.

Euclid will observe up to two billion galaxies occupying more than one-third of the sky with the goal of better understanding the contents of our universe. Everyday matter that we see around us, for example in tables and chairs, people and even stars, makes up only a few percent of everything in our cosmos. If you could fill a bucket with the mass and energy contents of our universe, this everyday matter would fill only a small fraction. A larger amount, about 24 percent, would consist of dark matter, an invisible substance that does not reflect or emit any light, but exerts a gravitational tug on other matter.

The majority of our universal bucket, about 73 percent, is thought to be filled with dark energy, something even more mysterious than dark matter. Whereas dark matter pulls through its gravity, dark energy is thought to be a repulsive force pushing matter apart. Scientists think dark energy may be responsible for stretching our universe apart at ever-increasing speeds, an observation that earned the Nobel Prize in 2011.

Euclid scientists will use two methods to make the most precise measurements yet of our "dark" universe. The first method, called weak lensing, involves analyzing the shapes of billions of galaxies across more than half the age of the universe. When dark matter lies in front of galaxies, it can't be seen, but its gravity distorts the light from the galaxies behind it. More dark matter will lead to slightly larger distortions. By measuring these minute distortions, scientists can understand the amount and distribution of the dark matter between these galaxies and us.

Changes in these dark matter structures over time are governed by interplay between the attractive force of gravity and the repulsive dark energy. Thus, studying galaxy shapes reveals information about both dark matter and dark energy.

The second method, called galaxy clustering or baryon acoustic oscillations, will serve as an independent measurement of dark energy. Early in the universe, galaxies were imprinted with a standard distance between them. This distance -- referred to as a standard ruler -- expands as the universe itself expands. By making precise measurements of the distances between tens of millions of galaxies, the scientists will be able to chart this expansion and learn more about the dark energy driving it. Observations of how the galaxies are clustered will also further probe dark matter.

The JPL-led U.S. science team will employ both of these methods and work together with the rest of the Euclid scientists to shine light on the darkest riddles of our cosmos. Of the 43 team members, six are based at JPL. They are: Olivier Dore, Peter Eisenhardt, Alina Kiessling, Leonidas Moustakas, Jason Rhodes and Daniel Stern. Two additional team members, Peter Capak and Harry Teplitz, are based at the Infrared Processing and Analysis Center.

Euclid is a European Space Agency mission with science instruments and data analysis provided by the Euclid consortium with important participation from NASA. NASA's Euclid Project Office is based at JPL. JPL will contribute the infrared flight detectors for one of Euclid's two science instruments. NASA Goddard will assist with infrared detector characterization and will perform detailed testing on flight detectors prior to delivery. Three U.S. science teams, led by JPL, Goddard and the Infrared Processing and Analysis Center at Caltech, will contribute to science planning and data analysis. Caltech manages JPL for NASA.