JPL to Assist in Oil and Gas Tech Development 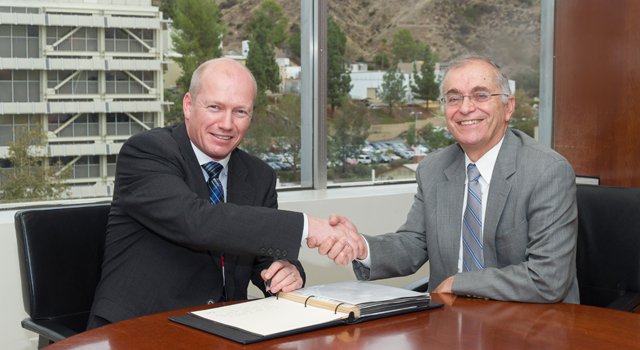 Senior members from the oil and gas company Statoil were at NASA's Jet Propulsion Laboratory to participate in a ceremony for a recently signed agreement with NASA.

Charles Elachi, director of NASA's Jet Propulsion Laboratory in Pasadena, Calif., met with top executives of the Norwegian-based oil and gas company, Statoil, on Friday, Nov. 22, in a ceremonial signing of a new agreement to assist in the development and subsequent transfer of technologies to Statoil and America's oil and gas activities. The focus will be on enabling safe and efficient development and production of U.S. and world fossil fuel reserves.

Technologies developed by JPL for the harsh and difficult environments of space will be applied to the demanding environments of oil and gas production. The agreement also provides an opportunity for JPL to benefit from synergistic technology currently being developed in the oil and gas sector that might be used for space exploration.

Statoil has large holdings in the U.S., in such challenging environments as offshore and tight shale formations. It is number 39 on the Forbes 500 list of the world's largest companies.

"This agreement is the latest example of how NASA and JPL technologies can benefit us here on Earth. It's also an example of how collaborations with other industries can be beneficial to space exploration," said JPL Director Charles Elachi.

In addition to a general tour of JPL prior to the signing ceremony, Statoil representatives also had an opportunity to see JPL's Microdevices Laboratory, where some of these technologies are being developed.