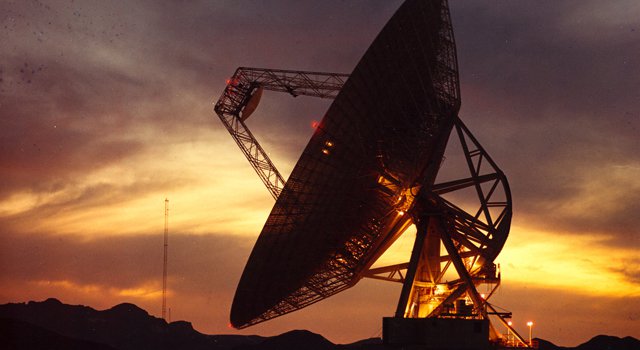 The Goldstone Deep Space Communications Complex, located in the Mojave Desert in California, is one of three complexes which comprise NASA's Deep Space Network (DSN). The DSN provides radio communications for all of NASA's interplanetary spacecraft and is also utilized for radio astronomy and radar observations of the solar system and the universe.
Credit: NASA/JPL-Caltech

The subcontract has a base period of five years, with incentive provisions that can extend it up to 10 years for a total subcontract value of $435 million.

"The Deep Space Network is a lifeline to more than 30 spacecraft in deep space that are sending down unique science data about places like the surface of Mars and the far reaches of our solar system," said Al Bhanji, the Deep Space Network project manager based at JPL. "Its ongoing operation ensures that we'll be able to command those spacecraft to do things like take the pictures the science community and the public are so eager to see, to get those bits of data on the ground and to help engineers address any unexpected issues that may arise."

In 1963, NASA established the Deep Space Network as a separately managed and operated communications facility to accommodate all deep space missions. This avoided the need for each flight project to acquire its own specialized space communications network. During the Apollo period (1967-1972), these stations supported America's missions to the moon, including the historic first manned landing. The Goldstone antenna, in particular, captured Neil Armstrong's historic words and sent them to American television sets while the images came through another antenna.

The Deep Space Network is now sending commands and receiving data from a fleet of robotic spacecraft that includes NASA's Curiosity rover on Mars, the Spitzer Space Telescope, the Saturn explorer Cassini and the two Voyager spacecraft, which are more than 9 billion miles (14 billion kilometers) away from Earth. The 230-foot (70-meter) antenna at Goldstone has also used its radar to generate radar images of asteroids, including 1998 QE2, which made a distant flyby of Earth in May 2013.

The California Institute of Technology manages JPL, NASA's only federally funded research and development center. JPL manages the Deep Space Network for NASA Headquarters in Washington. More information about the Deep Space Network is online at: http://deepspace.jpl.nasa.gov . More information about NASA's Space Communications and Navigation program is at: https://www.spacecomm.nasa.gov .