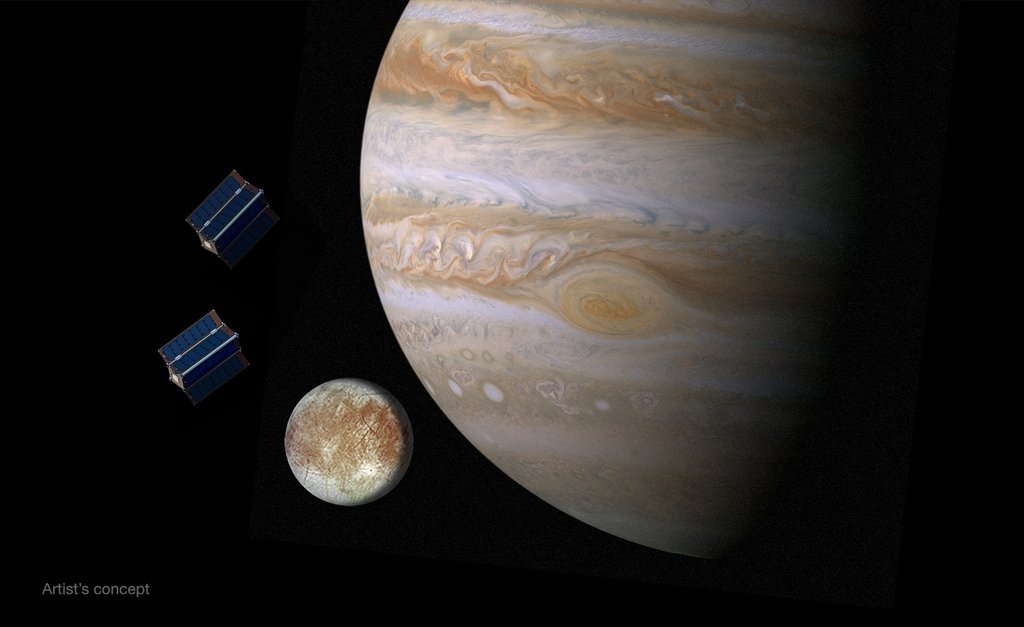 NASA's Jet Propulsion Laboratory has chosen proposals from 10 universities for CubeSats that could potentially enhance a Europa mission concept currently under study by NASA.

NASA's Jet Propulsion Laboratory in Pasadena, California, has chosen proposals from 10 universities to study CubeSat concepts that could enhance a Europa mission concept currently under study by NASA. The CubeSat concepts will be incorporated into a JPL study describing how small probes could be carried as auxiliary payloads. The CubeSats would then be released in the Jovian system to make measurements and enhance our understanding of Jupiter's moon Europa.

CubeSats are small, lightweight and low-cost satellites, often only inches on a side. With support from NASA, JPL is working to include small spacecraft on deep space exploration missions to complement primary spacecraft.

The conceptual Europa mission would conduct detailed reconnaissance of the icy moon and investigate whether it could harbor conditions suitable for life.

Awardees will receive up to $25,000 each to develop their CubeSat concepts for inclusion in the study, which will be completed next summer.

CubeSat concepts from the following universities were chosen by JPL's Planetary CubeSat office for inclusion in the study:

-- The Regents of the University of Colorado, Boulder

-- The Regents of the University of Michigan, Ann Arbor

The universities' Europa science objectives for their CubeSats would include reconnaissance for future landing sites, gravity fields, magnetic fields, atmospheric and plume science, and radiation measurements.

"We've seen some innovative and quite creative surprises among the CubeSat ideas submitted by these universities," said Barry Goldstein, pre-project manager for the Europa mission concept. "Using CubeSats for planetary exploration is just now becoming possible, so we want to explore how a future mission to Europa might take advantage of them."

For more information about the Europa mission, visit: