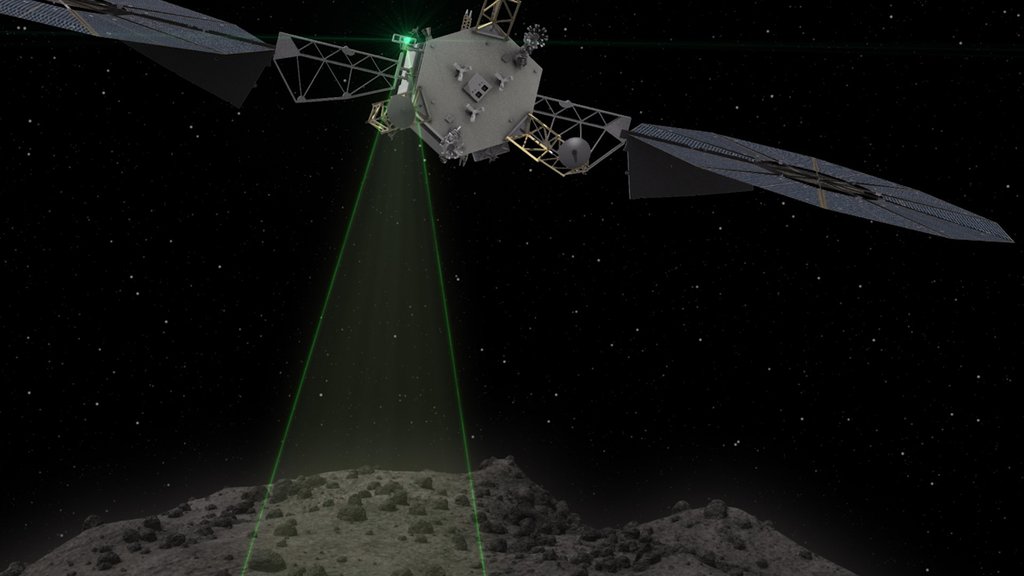 This graphic depicts the Asteroid Redirect Vehicle conducting a flyby of its target asteroid. During these flybys, ARM would come within 0.6 miles (1 kilometer), generating imagery with resolution of up to 0.4 of an inch (1 centimeter) per pixel.
Credit: NASA

JPL issues a request for proposal for design, development and build of the robotic spacecraft to capture an asteroid boulder for the Asteroid Redirect Mission.

NASA's Jet Propulsion Laboratory in Pasadena, California, has issued a request for proposal (RFP) seeking design, development and build of the robotic spacecraft that will capture a multi-ton asteroid boulder from deep space during the first segment of the agency's Asteroid Redirect Mission (ARM). The RFP is open to the four industry partners that previously completed conceptual designs of the spacecraft.

ARM is a two-part mission that will integrate robotic and crewed spacecraft operations in the proving ground of deep space to demonstrate key capabilities needed for NASA's Journey to Mars. The robotic segment of the mission completed its Key Decision Point-B (KDP-B) review in August, which served as authority for JPL to proceed with this next procurement phase.

The four subcontractors involved with the Conceptual Study Phase (Phase 1) were chosen through a competitive process. The subcontractors involved are: Lockheed Martin Space Systems of Littleton, Colorado, Space Systems/Loral of Palo Alto, Calif., Boeing Phantom Works of Huntington Beach, Calif., and Orbital ATK of Dulles, Virginia. Proposal submissions for the design, development and build of the robotic flight system are due to JPL by Oct. 24, 2016. JPL plans to award the ARM spacecraft build and delivery contract in 2017.

The robotic segment of ARM will demonstrate advanced, high-power, high-throughput solar electric propulsion; advanced autonomous precision proximity operations at a low-gravity planetary body; and controlled touchdown and liftoff with a multi-ton mass. The crew segment of the mission will include spacewalk activities for sample selection, extraction, containment and return; and mission operations of integrated robotic and crewed vehicle stack -- all key components of future in-space operations for human missions to the Mars system.

The robotic ARM spacecraft will demonstrate the world's most advanced and most efficient solar electric propulsion system as it travels to a near-Earth asteroid. These asteroids are fewer than 121 million miles (1.3 AU) from the sun at the closest point in their orbit. Although the target asteroid is not expected to be officially selected until 2020, NASA is using 2008 EV5 as the target asteroid while the search continues for potential alternates.

Going to an asteroid such as 2008 EV5 is particularly appealing to the scientific, exploration and industrial communities because it is a primitive, C-type (carbonaceous) asteroid, believed to be rich in volatiles, water and organic compounds. The ability to extract core samples from the captured boulder will allow us to evaluate how its composition varies with depth and could significantly advance our understanding of the origins of our solar system. Astronaut sampling and potential commercial activities could help establish the value of C-type asteroids for commercial mining purposes, which in turn could have significant impacts on how deep space missions are designed and implemented in the future.

After collecting a multi-ton boulder from the asteroid, the robotic spacecraft will redirect the boulder to a crew-accessible orbit around the moon, where NASA plans to conduct a series of proving ground missions in the 2020s that will help validate capabilities needed for NASA's Journey to Mars.