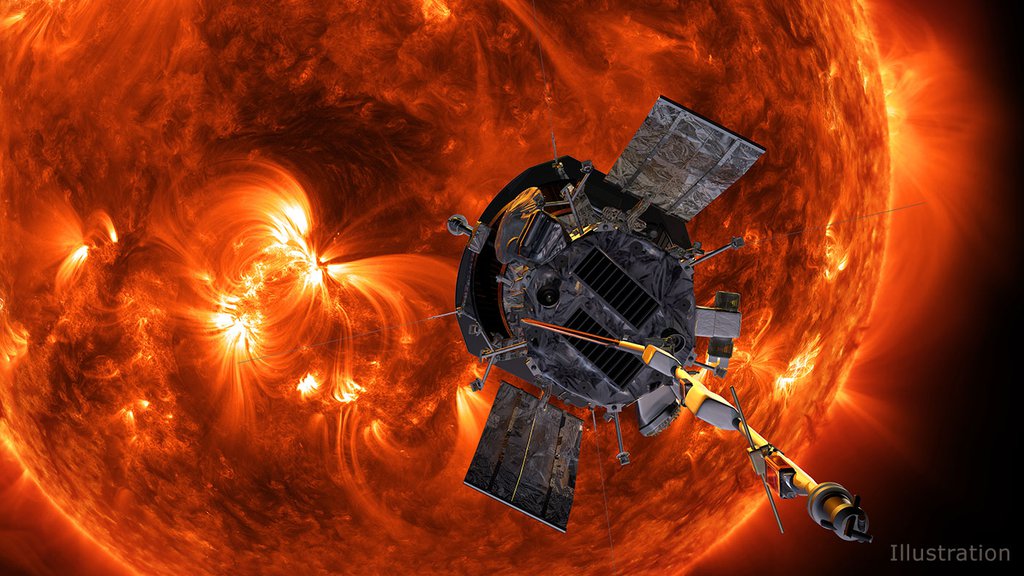 JPL leading navigation for Parker Solar Probe and is involved with two of its onboard instruments.

The navigation for NASA's Parker Solar Probe is led by the agency's Jet Propulsion Laboratory in Pasadena, California, which also has a role in two of the spacecraft's four onboard instrument suites. Parker Solar Probe will fly closer to the Sun than any previous spacecraft and through the solar corona itself.

One instrument, called the Energetic Particle Instrument-Hi (EPI-Hi), will investigate the mysteries of high-speed solar particles that hurtle toward Earth at close to the speed of light. Observations by the Parker Solar Probe will lead to better predictions of space weather and address fundamental mysteries about the Sun's dynamic corona. EPI-Hi is part of the Integrated Science Investigation of the Sun, led by Principal Investigator David McComas of Princeton University in New Jersey.

This animation shows Parker Solar Probe flying through the solar corona and coronal mass ejections. The fields of view of the two WISPR telescopes are defined by the pyramid-shaped rays coming from WISPR instrument. When approaching the Sun, the spacecraft flies such that its heat shield is always facing the Sun to protect the instruments and spacecraft from the intense solar radiation. As it gets closer to the Sun, the solar panels are folded back behind the shield so that only the tips are exposed to sunlight. The animation also shows how WISPR uses the heat shield to block out the direct sunlight so it can view the corona, which is seen in reflected sunlight

"We will be exploring a region of space that has never before been visited," said Mark Wiedenbeck, the lead investigator on the EPI-Hi instrument and a principal research scientist at JPL. "We have ideas about what will be found, but the most important results may well come from observations that are completely unexpected."

Of particular interest to the EPI-Hi team is the unsolved riddle of how a small fraction of the charged particles from the Sun reach near-light speeds. These particles, protons, electrons and heavy ions can reach Earth in less than an hour, creating space weather hazards to humans and hardware in space. Until now, scientists had been observing from a distance the effects of what is happening near the Sun. With the Parker Solar Probe now on its way to fly through the region where it is happening, scientists are confident they will obtain new clues and insight into the process.

Another instrument on Parker Solar Probe -- the Wide-Field Imager for Solar Probe Plus (WISPR) - is the only camera aboard the spacecraft. It will take images of the Sun's corona and inner heliosphere. The imager has two telescopes that will capture images of the solar wind, shock waves and other coronal structures as they approach and pass the spacecraft.WISPR provides a very wide field-of-view, extending from 13 degrees away from the center of the Sun to 108 degrees away.

"If you saw the solar eclipse last August, you saw the Sun's corona. That is our destination. WISPR will be taking images of the corona as it flies through it. The images will help us understand the morphology, velocity, acceleration and density of evolving solar wind structures when they are close to the Sun," said JPL scientist Paulett Liewer, a member of the WISPR Science Team. The WISPR principal pnvestigator is Russell Howard of the Naval Research Laboratory.

In leading Parker's navigation efforts, JPL is helping to implement the mission's innovative trajectory, developed by the Johns Hopkins Applied Physics Laboratory, Laurel, Maryland, which built and operates the spacecraft for NASA. The Parker Solar Probe will use seven Venus flybys over nearly seven years to gradually shrink its orbit around the Sun, coming as close as 3.83 million miles (6.16 million kilometers) to the Sun, well within the orbit of Mercury and about seven times closer to the Sun than any spacecraft before.

The Parker Solar Probe lifted off on Aug. 12, 2018, on a United Launch Alliance Delta IV Heavy rocket from Space Launch Complex-37 at Cape Canaveral Air Force Station in Florida. The mission's findings will help researchers improve their forecasts of space weather events, which have the potential to damage satellites and harm astronauts on orbit, disrupt radio communications and, at their most severe, overwhelm power grids.

EPI-Hi is managed for NASA by Caltech in collaboration with JPL, which is a division of Caltech. The Parker Solar Probe is part of NASA's Living with a Star Program, or LWS, to explore aspects of the Sun-Earth system that directly affect life and society. LWS is managed by NASA's Goddard Space Flight Center in Greenbelt, Maryland, for the Heliophysics Division of NASA's Science Mission Directorate in Washington. Johns Hopkins APL manages the Parker Solar Probe mission for NASA.

More information on Parker Solar Probe is available at: