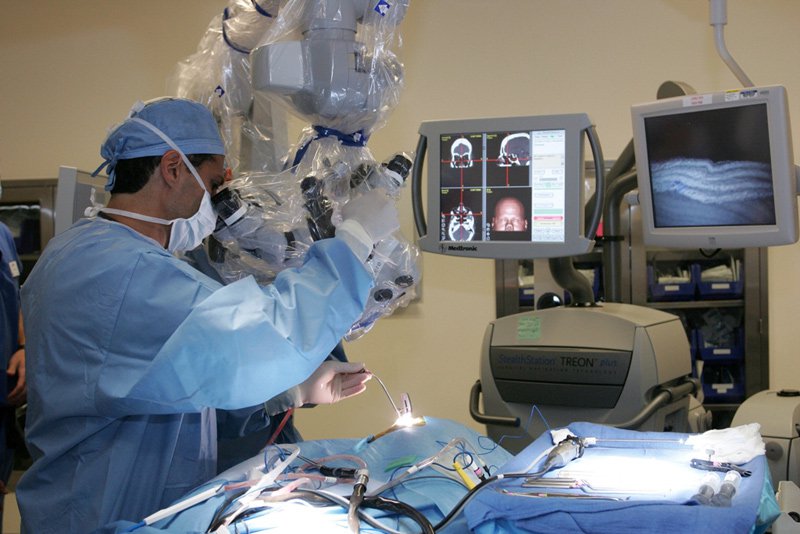 Benham Badie, M.D., director of the Department of Neurosurgery and the Brain Tumor program at City of Hope, performs a minimally invasive procedure to surgically remove a pituitary tumor. Nanotube technology may help in the development of new treatments that would require only minimally invasive procedures no matter the location of the brain tumor.
Credit: City of Hope

PASADENA, Calif.- The potential of carbon nanotubes to diagnose and treat brain tumors is being explored through a partnership between NASA's Jet Propulsion Laboratory, Pasadena, Calif., and City of Hope, a leading cancer research and treatment center in Duarte, Calif.

PASADENA, Calif.- The potential of carbon nanotubes to diagnose and treat brain tumors is being explored through a partnership between NASA's Jet Propulsion Laboratory, Pasadena, Calif., and City of Hope, a leading cancer research and treatment center in Duarte, Calif.

Nanotechnology may help revolutionize medicine in the future with its promise to play a role in selective cancer therapy. City of Hope researchers hope to boost the brain's own immune response against tumors by delivering cancer-fighting agents via nanotubes. A nanotube is about 50,000 times narrower than a human hair, but it length can extend up to several centimeters.

If nanotube technology can be effectively applied to brain tumors, it might also be used to treat stroke, trauma, neurodegenerative disorders and other disease processes in the brain, said Dr. Behnam Badie, City of Hope's director of neurosurgery and of its brain tumor program.

"I'm very optimistic of how this nanotechnology will work out," he said. "We are hoping to begin testing in humans in about five years, and we have ideas about where to go next."

The Nano and Micro Systems Group at JPL, which has been researching nanotubes since about 2000, creates these tiny, cylindrical multi-walled carbon tubes for City of Hope.

City of Hope researchers, who began their quest in 2006, found good results: The nanotubes, which they used on mice, were non-toxic in brain cells, did not change cell reproduction and were capable of carrying DNA and siRNA, two types of molecules that encode genetic information.

JPL's Nano and Micro Systems Group grows the nanotubes on silicon strips a few square millimeters in area. The growth process forms them into hollow tubes as if by rolling sheets of graphite-like carbon.

Nanotubes are a fairly new innovation, so they are not yet routinely used in current NASA missions, he added. However, they may be used in gas-analysis or mineralogical instruments for future missions to Mars, Venus and the Jupiter system.

JPL's collaboration with City of Hope began last year, after Manohara, Badie and Dr. Babak Kateb, City of Hope's former director of research and development in the brain tumor program, discussed using nanostructures to better diagnose and treat brain cancer. Badie said his team's nanomedical research continues, and the next goal will be to functionalize and attach inhibitory RNA to the nanotubes and deliver it to specific areas of the brain.

The JPL and City of Hope teams published the results of the study earlier this year in the journal NeuroImage.

Badie says that JPL's contribution to City of Hope's nanomedicine research has been invaluable.

"The fact that we can get pristine and really clean nanotubes from Manohara's department is unique," he said. "The fact that we are both collaborating for biological purposes is also really unique."

The collaboration between JPL and City of Hope is conducted under NASA's Innovative Partnership Program, designed to bring benefits of the space program to the public.