Caption: ASTERIA was deployed from the International Space Station on November 20, 2017.
Credit: NASA/JPL-Caltech 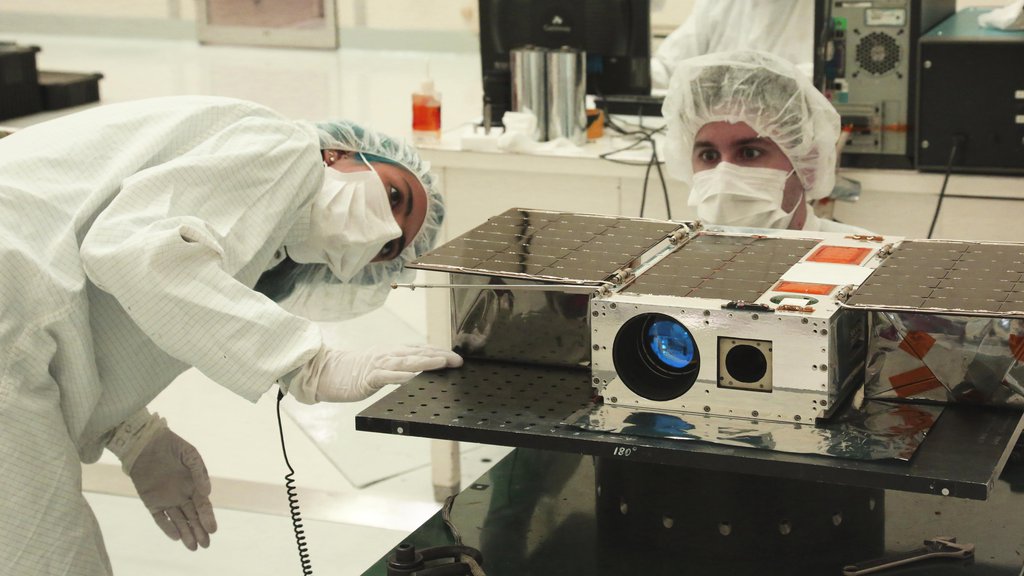 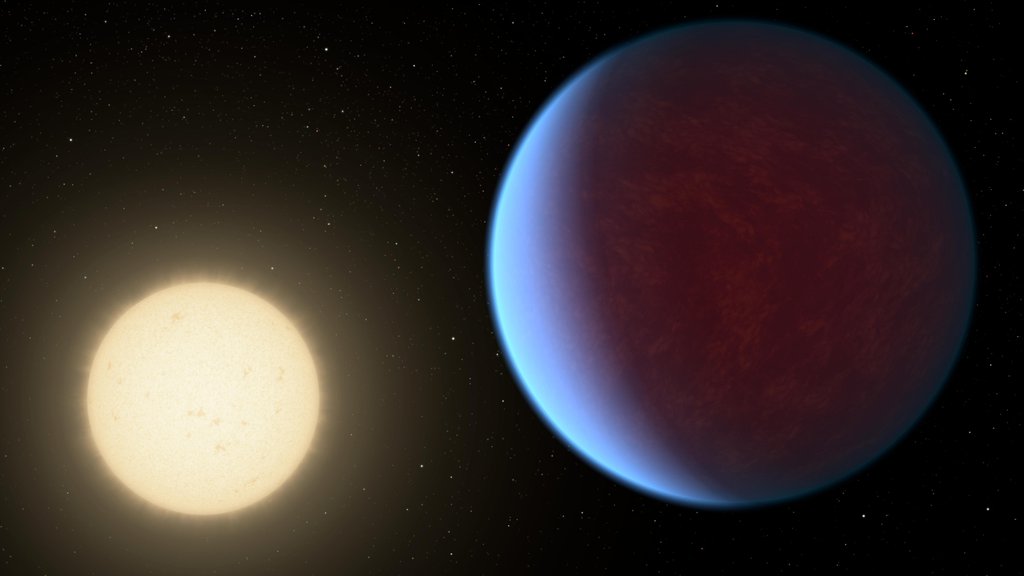 The super-Earth exoplanet 55 Cancri e, depicted with its star in this artist's concept, likely has an atmosphere thicker than Earth's but with ingredients that could be similar to those of Earth's atmosphere.
Credit: NASA/JPL-Caltech
Full Image Details

About the size of a briefcase, the CubeSat was built to test new technologies but exceeded expectations by spotting a planet outside our solar system.

Long before it was deployed into low-Earth orbit from the International Space Station in Nov. 2017, the tiny ASTERIA spacecraft had a big goal: to prove that a satellite roughly the size of a briefcase could perform some of the complex tasks much larger space observatories use to study exoplanets, or planets outside our solar system. A new paper soon to be published in the Astronomical Journal describes how ASTERIA (short for Arcsecond Space Telescope Enabling Research in Astrophysics) didn't just demonstrate it could perform those tasks but went above and beyond, detecting the known exoplanet 55 Cancri e.

Scorching hot and about twice the size of Earth, 55 Cancri e orbits extremely close to its Sun-like parent star. Scientists already knew the planet's location; looking for it was a way to test ASTERIA's capabilities. The tiny spacecraft wasn't initially designed to perform science; rather, as a technology demonstration, the mission's goal was to develop new capabilities for future missions. The team's technological leap was to build a small spacecraft that could conduct fine pointing control - essentially the ability to stay very steadily focused on an object for long periods.

Based at NASA's Jet Propulsion Laboratory in Southern California and at the Massachusetts Institute of Technology, the mission team engineered new instruments and hardware, pushing past existing technological barriers to create their payload. Then they had to test their prototype in space. Though its prime mission was only 90 days, ASTERIA received three mission extensions before the team lost contact with it last December.

The CubeSat used fine pointing control to detect 55 Cancri e via the transit method, in which scientists look for dips in the brightness of a star caused by a passing planet. When making exoplanet detections this way, a spacecraft's own movements or vibrations can produce jiggles in the data that could be misinterpreted as changes in the star's brightness. The spacecraft needs to stay steady and keep the star centered in its field of view. This allows scientists to accurately measure the star's brightness and identify the tiny changes that indicate the planet has passed in front of it, blocking some of its light.

ASTERIA follows in the footsteps of a small satellite flown by the Canadian Space Agency called MOST (Microvariability and Oscillations of Stars), which in 2011 performed the first transit detection of 55 Cancri e. MOST was about six times the volume of ASTERIA - still incredibly small for an astrophysics satellite. Equipped with a 5.9-inch (15-centimeter) telescope, MOST was also capable of collecting six times as much light as ASTERIA, which carried 2.4-inch (6-centimeter) telescope. Because 55 Cancri e blocks out only 0.04% of its host star's light, it was an especially challenging target for ASTERIA.

"Detecting this exoplanet is exciting, because it shows how these new technologies come together in a real application," said Vanessa Bailey, the principal investigator for ASTERIA's exoplanet science team at JPL. "The fact that ASTERIA lasted more than 20 months beyond its prime mission, giving us valuable extra time to do science, highlights the great engineering that was done at JPL and MIT."

The mission made what's known as a marginal detection, meaning the data from the transit would not, on its own, have convinced scientists that the planet existed. (Faint signals that look similar to a planet transit can be caused by other phenomena, so scientists have a high standard for declaring a planet detection.) But by comparing the CubeSat's data with previous observations of the planet, the team confirmed that they were indeed seeing 55 Cancri e. As a tech demo, ASTERIA also didn't undergo the typical prelaunch preparations for a science mission, which meant the team had to do additional work to ensure the accuracy of their detection.

"We went after a hard target with a small telescope that was not even optimized to make science detections - and we got it, even if just barely," said Mary Knapp, the ASTERIA project scientist at MIT's Haystack Observatory and lead author of the study. "I think this paper validates the concept that motivated the ASTERIA mission: that small spacecraft can contribute something to astrophysics and astronomy."

While it would be impossible to pack all the capabilities of a larger exoplanet-hunting spacecraft like NASA's Transiting Exoplanet Survey Satellite (TESS) into a CubeSat, the ASTERIA team envisions these petite packages playing a supporting role for them. Small satellites, with fewer demands on their time, could be used to monitor a star for long periods in hopes of detecting an undiscovered planet. Or, after a large observatory discovers a planet transiting its star, a small satellite could watch for subsequent transits, freeing up the larger telescope to do work smaller satellites can't.

Astrophysicist Sara Seager, principal investigator for ASTERIA at MIT, was recently awarded a NASA Astrophysics Science SmallSat Studies grant to develop a mission concept for a follow-on to ASTERIA. The proposal describes a constellation of six satellites about twice as big as ASTERIA that would search for exoplanets similar in size to Earth around nearby Sun-like stars.

To build the smallest planet-hunting satellite in history, the ASTERIA wasn't simply shrinking hardware used on larger spacecraft. In many cases, they had to take a more innovative approach. For example, the MOST satellite used a camera with a charge-coupled device (CCD) detector, which is common for space satellites; ASTERIA, on the other hand, was equipped with a complementary metal-oxide-semiconductor (CMOS) detector - a well-established technology typically used for making precision measurements of brightness in infrared light, not visible light. ASTERIA's CMOS-based, visible-light camera provided multiple advantages over a CCD. One big one: It helped keep ASTERIA small because it operated at room temperature, eliminating the need for the large cooling system that a cold-operating CCD would require.

"This mission has mostly been about learning," said Akshata Krishnamurthy, co-investigator and science data analysis co-lead for ASTERIA at JPL. "We've discovered so many things that future small satellites will be able to do better because we demonstrated the technology and capabilities first. I think we've opened doors."

ASTERIA was developed under JPL's Phaeton program, which provided early-career hires, under the guidance of experienced mentors, with the challenges of a flight project. ASTERIA is a collaboration with MIT in Cambridge; MIT's Sara Seager is principal investigator on the project. Brice Demory of the University of Bern also contributed to the new study. The project's extended missions were partially funded by the Heising-Simons Foundation. JPL is a division of Caltech in Pasadena, California.