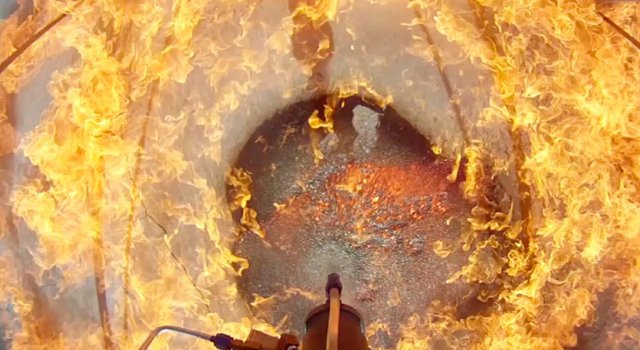 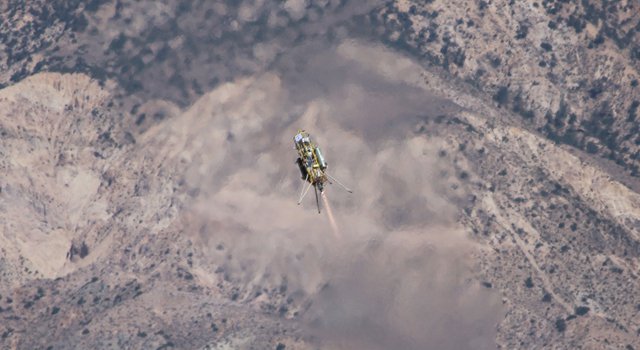 A Xombie technology demonstrator from Masten Space Systems, Mojave, Calif., ascends from its pad at Mojave Air and Space Port on a test for NASA's Jet Propulsion Laboratory. The vehicle is a vertical-takeoff, vertical-landing experimental rocket. It is being used in collaboration with NASA Dryden Flight Research Center to evaluate performance of JPL's Fuel Optimal Large Divert Guidance (G-FOLD), a new algorithm for planetary pinpoint landing of spacecraft.› Full image and caption
Credit: NASA/Masten

With engineers and officials from NASA's Jet Propulsion Laboratory watching, Masten Space Systems' XA-0.1B "Xombie" took to the sky again in the fall of 2013. The Sept. 20 flight at the Mojave Air and Space Sport in the California desert was the conclusion of the test campaign to assess the performance of JPL's Guidance for Fuel Optimal Large Diverts (G-FOLD) algorithm under mission conditions. More ambitious than the previous flights, this test had the Xombie vehicle initially travel diagonally away from the target landing site. This simulated a worst-case spacecraft landing maneuver and forced the G-FOLD algorithm to calculate, in real time, a flight path that crossed over itself to reach the safe landing site.

The accurately executed half-mile-long (0.8-kilometer), three-dimensional divert shows the potential of what G-FOLD could mean for future space missions. Compared to the software used to land NASA's Mars Curiosity rover in August 2012, G-FOLD can provide six times more divert range for a lander of that class. Such a capability would be needed for landing on Europa or for human missions to Mars. G-FOLD also may reduce the difficulty of future robotic missions to Mars, allowing rovers to land closer to features of interest instead of driving long distances to reach them. A future rover similar to Curiosity might be able to land right next to a target of scientific interest like Mount Sharp instead of driving for a year to get there.

Even though this is the culmination of the current round of testing, JPL still has far-reaching plans for G-FOLD and for further tests of other landing technologies. "G-FOLD presents a dramatic improvement in our ability to execute large divert maneuvers with limited fuel," said Martin Regehr, who leads JPL's Autonomous Descent and Ascent Powered-flight Testbed (ADAPT). To further enhance future mission capability, JPL plans to use ADAPT to demonstrate terrain-relative navigation using the Lander Vision System (LVS) together with G-FOLD in 2014.

A video of the flight can be found here.

These efforts were performed by JPL, with participation from the University of Texas at Austin; Masten Space Systems, Inc., Mojave, Calif.; and NASA's Flight Opportunities Program, which is managed by NASA's Dryden Flight Research Center, Edwards, Calif.

A year after NASA's Mars rover Curiosity's landed on Mars, engineers at NASA's Jet Propulsion Laboratory in Pasadena, Calif., are testing a sophisticated flight-control algorithm that could allow for even more precise, pinpoint landings of future Martian spacecraft.

"The Flight Opportunities Program supports both the development of innovative space technology and the emerging suborbital industry by using commercial suborbital vehicles to test concepts that could further mankind's exploration and understanding of the universe," said Christopher Baker, a campaign manager for the program. "The collaboration between JPL and Masten to test G-FOLD is a great example of how we hope to further the exploration of the solar system while building up the industrial base needed to advance future space endeavors."

Masten Space Systems launched the Xombie July 30 from the company's test pad at the Mojave Air and Space Port. JPL and Masten are planning to conduct a second flight test with a more complicated divert profile in August, pending data analysis.

To simulate a course correction during a Martian entry in the July test, Masten's Xombie was given a vertical descent profile to an incorrect landing point. About 90 feet into the profile, the G-FOLD flight control software was automatically triggered to calculate a new flight profile in real-time, and the rocket was successfully diverted to the "correct" landing point some 2,460 feet away.

"This flight was an unprecedented free-flying demonstration of the on-board calculation of a fuel-optimal trajectory in real time," said Martin Regehr, acting task lead for the Autonomous Descent Ascent Powered-Flight Testbed at JPL.

JPL, a division of the California Institute of Technology, Pasadena, manages the Curiosity project for NASA's Science Mission Directorate, Washington. For information about Curiosity's accomplishments over the past year, visit: http://mars.jpl.nasa.gov/msl .