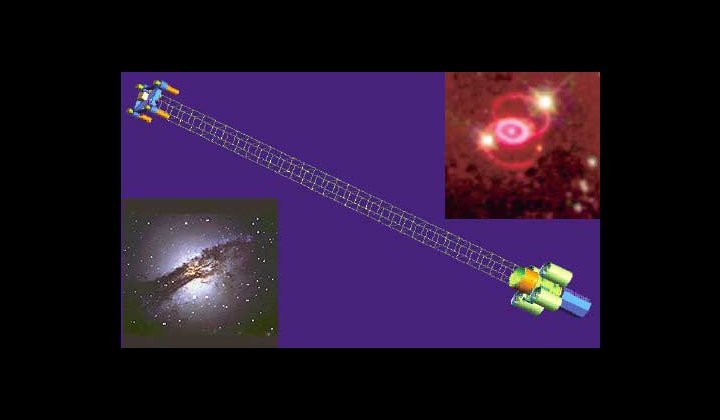 A mission to study black holes, managed by NASA's Jet Propulsion Laboratory, Pasadena, Calif., is one of five selected recently by NASA as candidate mission proposals to study the universe.

A mission to study black holes, managed by NASA's Jet Propulsion Laboratory, Pasadena, Calif., is one of five selected recently by NASA as candidate mission proposals to study the universe. The proposals are candidates for missions in NASA's Explorer Program of lower cost, highly focused, rapid-development scientific spacecraft.

Following detailed mission concept studies, NASA intends to select two of the five mission proposals by fall 2004 for full development as Small Explorer missions. The two missions developed for flight will be launched in 2007 and 2008.

The JPL-managed proposed mission is the Nuclear Spectroscopic Telescope Array, a telescope to carry out a census of black holes with 1,000 times more sensitivity than previous experiments. The mission would be led by Fiona Anne Harrison of the California Institute of Technology, Pasadena, at a total mission cost to NASA of $132 million.

In addition to the five missions, NASA has also decided to fund as a "Mission of Opportunity" a balloon-borne experiment to detect high-energy neutrinos, ghostly particles that fill the universe. The Antarctic Impulsive Transient Antenna, managed by JPL, would detect radio waves emitted when high-energy neutrinos interact in the Antarctic ice shelf. The mission would be led by Peter W. Gorham of the University of Hawaii at Manoa in Honolulu, at a total mission cost to NASA of $35 million.

"The Small Explorer mission proposals we received show that the scientific community has a lot of innovative ideas on ways to study some of the most vexing questions in science, and to do it on a relatively small budget," said Dr. Ed Weiler, associate administrator for space science at NASA Headquarters, Washington. "It was difficult to select only a few from among the many great proposals we received, but I think the selected proposals have a great chance to really push back the frontiers of knowledge."

The selected proposals were judged to have the best science value among 36 submitted to NASA in February 2003. Each will receive $450,000 ($250,000 for the Mission of Opportunity) to conduct a five-month implementation feasibility study.

The other selected Small Explorer mission proposals are:

-- The Normal-incidence Extreme Ultraviolet Spectrometer: a solar spectrometer with major advances in sensitivity and resolution to reveal the cause of coronal heating and solar wind acceleration. Joseph M. Davila of NASA's Goddard Space Flight Center, Greenbelt, Md., would lead the mission at a total cost to NASA of $131 million.

-- The Dark Universe Observatory: seven X-ray telescopes to measure the dark matter and dark energy that dominate the content of the universe with 100 times the sensitivity of previous X-ray studies. Richard E. Griffiths of Carnegie Mellon University, Pittsburgh, would lead the mission at a total cost to NASA of $132 million.

-- The Interstellar Boundary Explorer: a pair of cameras to image the boundary between the solar system and interstellar space with 100 times the sensitivity of previous experiments. David J. McComas of the Southwest Research Institute, San Antonio, would lead the mission at a total cost to NASA of $132 million..

-- The Jupiter Magnetospheric Explorer: a telescope to study Jupiter's aurora and magnetosphere from Earth orbit. Nicholas M. Schneider of the University of Colorado at Boulder would lead the mission, at a total mission cost to NASA of $133 million.

In addition, NASA selected a proposed mission for technology-development funding of a proposed instrument. Jean Swank of Goddard will develop a polarization sensitive X-ray detector. Swank will receive up to $300,000 over the next two years for her study.

The five selected Small Explorer mission proposals are vying to be the tenth and eleventh missions selected for full development. Recent selections include the Reuven Ramaty High Energy Solar Spectroscopic Imager, launched in February 2002; the Galaxy Evolution Explorer, launched in April 2003; and the Aeronomy of Ice in the Mesosphere mission, to be launched in 2006. The Explorer Program, managed by Goddard for NASA's Office of Space Science, is designed to provide frequent, low-cost access to space for physics and astronomy missions with small to mid-sized spacecraft.