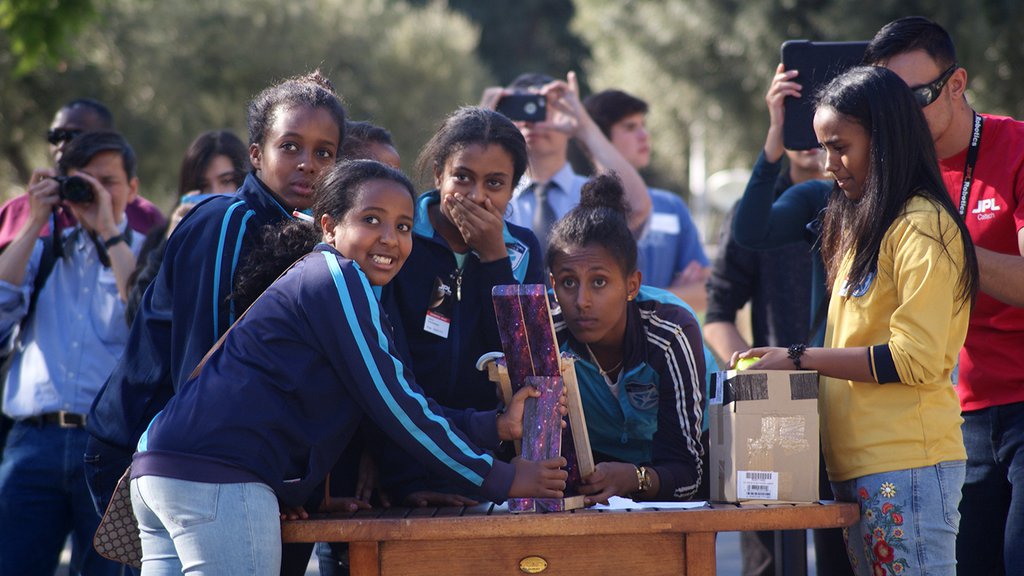 Students from as far away as Tanzania and Ethiopia joined JPL professionals in the annual Invention Challenge.

Catapults and leaf-blowers were among the many innovative devices built by students for the 2017 Invention Challenge, an annual engineering competition at NASA's Jet Propulsion Laboratory, Pasadena, California.

Middle schools and high schools were represented from across the greater Los Angeles area. Three teams even required passports, with students coming from Tanzania and Ethiopia.

This year's "Wiffle Ball Loft Contest" required competitors to create a device to launch up to 10 wiffle balls into a plastic tub located 19 feet, 8 inches (6 meters) away within a one-minute time allotment. The challenges were many: launching at the best angles with the varying wind directions; making sure the device was initiated by only one method; and even preventing the wiffle ball from breaking, which would result in disqualification.

The winners were from Southern California: "Project Defying Gravity" from Diamond Bar High School; "Cre8tive" from South East High School in Southgate; and "The Lizards" from Lawndale High School.

Paul MacNeal, a mechanical systems engineer at JPL, created the Invention Challenge 20 years ago to inspire students to pursue careers in engineering -- and have fun in the process. MacNeal said the event has influenced previous participants to recreate the competition in their local communities -- as far away as Istanbul.

"When I was in high school, I thought being involved with NASA-JPL was unattainable," MacNeal said. "I wanted to change that and inspire competitors to pursue engineering careers."

Yasin Giray, an Ethiopian volunteer teacher who brought the Ethiopian team to JPL, said Africa generally does not have enough opportunities for his students to show their skills in the science and technology fields.

"We encountered some difficulties along the way. Ethiopia does not sell the wiffle balls used in the contest, so we practiced with balls made of a different plastic," Giray said. "We could only practice when we arrived in the U.S., but we knew we had to take this opportunity."

Diamond Bar High School's first place team, "Project Defying Gravity," was a team of two. They developed a device elastically powered through a surgical tube calibrated to use multiple strengths to adjust to changing winds.

"A specific gelato container is the perfect size to fit a wiffle ball. So, we ate a lot of ice cream to use them in our device," Megan Ho, one of the two team members said. "I feel elated that we won. This competition has made me want to pursue engineering more -- specifically mechanical engineering."